Looking for Jake by China Mieville

Looking for Jake (2005) is China Mieville's fifth book and his first short story collection. The thirteen short stories and one novella are mostly set in London, but in nearly every story London has changed or been altered in some strange, often undefinable manner, creating a highly unsettling atmosphere that permeates every story in the collection. 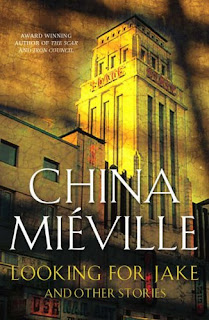 The book opens with 'Looking for Jake' itself. The title story is a letter from one inhabitant of London to another, against the backdrop of a city where people have vanished and an overwhelming sense of listlessness has overtaken the populace. It's short, haunting and sets the tone for the book impressively. 'Foundation' follows things up in a similar manner and is arguably the most horrific story in the collection, with it's protagonist who sees what other people cannot.

'The Ball Room', cowritten with Emma Bircham and Max Schaefer, is an ambiguous, murky little ghost story with an unusual setting which is highly disturbing, digging into the fears of every parent. On the other hand, 'Reports of Certain Events in London' is one of the most 'fun' story in the collection. The narrator is Mieville himself, claiming to have received a curious package of documents through the post which suggest that there's far more to the winding backstreets of suburbia than first meets the eye. There's a nice line of humour in this tale that contrasts well with the grimness of some of the other tales, and is one of Mieville's stories where the influence of Neil Gaiman on his writing is most evident.

'Familiar' is a downright grotesque tale of survival and identity with some nevertheless darkly amusing moments. 'Entry Taken from a Medical Encyclopedia' is a nice idea, a sterile examination of an apparently supernatural event which concludes with a mundane explanation being given which is nevertheless still horrific. There's a nice little trap that Mieville lays for the reader which is quite funny, but I defy any reader not to momentarily worry about the consequences.

'Details' is another psychological horror story, probably not best read by or to anyone with OCD. 'Go Between' can be read as an intriguing take on the War on Terror, with the protagonist being used by one side in an unknown conflict, and becoming paralysed by indecision: will acting save lives or kill them?

'Different Skies' opens with a pretty standard fantasy trope but its elderly narrator has a very different reaction to what you may expect from such a story. The tale plays with fears of mindless hatred and persecution and Mieville invokes the mindset of the OAP narrator in a most convincing manner. 'An End to Hunger' is an excellent commentary on those Internet charity chain-letters and the conclusion is darkly amusing.

'Tis the Season' is set in a world where Christmas has over-commercialised and priced out of the reach of most people, where only those with licenses can put up Christmas trees. The obvious (and perhaps slightly clumsy) metaphor is made up for by a nice line of cynical humour and a nice ending. 'Jack' is a must for fans of Perdido Street Station, returning to New Crobuzon and focusing on the character of Jack Half-a-Prayer. Those wondering what happened to him after the novel's conclusion have their question answered here, but in a manner they were not expecting at all.

The book ends with two different styles of story. 'On the Way to the Front' is a graphic short story, illustrated well by Liam Sharp, about a shadowy war being fought in plain sight on the streets of London. It's the most subtle story in the collection (which is saying something) with may different interpretations of the events possible. 'The Tain', on the other hand, is the longest story (actually a 100-page novella originally published in 2002 by PS Publishing) and sums up much of the feelings generated by the rest of the collection. London, and this time the world, has been devastated by an invasion it was not expecting in the slightest. One man leads the fight back. Or does he? The final line subverts the expectations the reader has been lured into by decades of SF movies and some of the more unimaginative fantasy epics.

Looking for Jake (****) is typical of Mieville's work, being haunting, original, dark, poetic and mysterious without ever being frustrating. A couple of the stories are less accomplished than the others, but this is still a fine piece of work from one of the best writers working in the genre today. The book is published by Pan MacMillan in the UK and by Del Rey in the United States.
Posted by Adam Whitehead at 21:25