Amazon has been drip-feeding a series of maps and tweets related to their upcoming Lord of the Rings prequel TV series, suggesting that they may have decided to take the show in a radically new direction and may have acquired the rights to Unfinished Tales along the way. 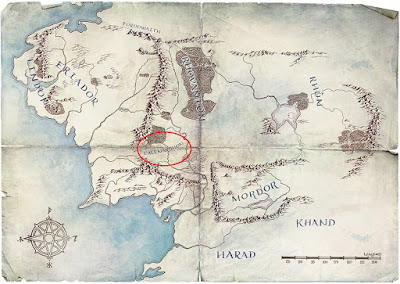 Most previous reports had suggested that Amazon's project would be set between The Hobbit and The Lord of the Rings and would focus on the adventures of a young Aragorn. However, Amazon's maps suggest that the story could be set considerably earlier.

The first clue was on the second map released (after the first, blank one), which named the major regions of Middle-earth but left the Shire, Gondor, Arnor and Rohan off the map. Most tellingly, the map features "Calenardhon," the ancient name for the lands south and east of Fangorn that later became the kingdom of Rohan. The presence of "Calenardhon" immediately suggests a setting prior to the founding of Rohan in the year 2509 of the Third Age (518 years before the events of The Lord of the Rings proper begin). Although Calenardhon was the name of the north-westernmost province of Gondor before it was ceded to Rohan, the name was also a regional one; it's earliest chronological use in the canon is in the story "Aldarion and Erendis" in Unfinished Tales, which it is used as a regional name as early as the 8th century of the Second Age, long before the founding of Gondor. 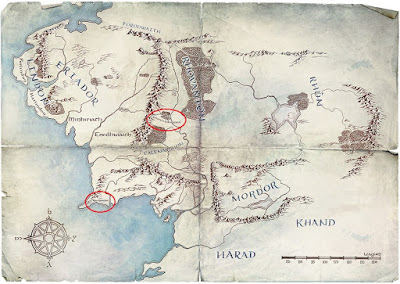 The third map adds more names and further suggests a time period. In particular, the addition of the name Laurelindórenan is very interesting. This was the Sindarin name given to the elven kingdom later known as Lothlórien. The mode Laurelindórenan seems to have been the standard name used until around the time of the War of Sauron and the Elves, following the forging of the Rings of Power, when Galadriel and Celeborn took up leadership in Laurelindórenan and the name of the realm was changed, as a result of Galadriel's magical ring enhancing the natural beauty of the kingdom.

The other interesting addition is that of Ras Morthil. Ras Morthil is the southern-most major mountain on the cape of Andrast, a south-westerly offshoot of the White Mountains (the great mountain range dividing Rohan from Gondor). Ras Morthil and the mountains of Andrast were the original home of the Druédain or "Woses", a diminutive race of men who play a brief but key role in the events of The Lord of the Rings when they provide intelligent to the Rohirrim on how to bypass a flanking force Sauron had sent to delay them whilst his armies attacked Minas Tirith (the woses were cut from the film for time reasons). By the time of The Lord of the Rings the region has become known as Drúwaith Iaur, referring to the Druédain as extinct (erroneously), a name adopted in the Third Age but not present on this map.

These clues seem to suggest that the map was not created any later than the second millennium of the Second Age, by the end of which Laurelindórenan had become Lothlórien and the other names would all be extant. Earlier in the Second Age could also be possible, but the region of Enedwaith was heavily forested up until around the 8th and 9th century, when Númenórean logging started to destroy the forests. The forests were mostly gone by the time of the War of Sauron and the Elves (1693-1701 SA). The absence of the forests on the map suggest that either Amazon's mapmakers missed that detail of the map dates from late in this period.

A mural depicting Ost-in-Edhil, capital city of Eregion, by artist Alan Lee. This artwork was created for Peter Jackson's Lord of the Rings movie trilogy and appears on a wall in Rivendell.

The logical conclusion, then, is that the "Young Aragorn" story has been dropped and the story will instead focus on one of the most interesting periods in the history of Middle-earth: the forging of the Rings of Power themselves.

This is good, given that the story of how the Rings were forged is itself epic and worthy. Sauron, in the guise of Annatar, an elven prince and master craftsmen, visits the great elven smiths of Eregion and corrupts them into forging the Rings of Power. Using their knowledge, Sauron then creates the One Ruling Ring. This perversion of the elves' craft triggers a great war which Sauron nearly wins, overrunning most of the elven kingdoms and driving them back to the sea, before Númenor enters the war on the elves' side. The story involves familiar Lord of the Rings characters such as Elrond, Galadriel, Celeborn, Gil-galad and Círdan, but also a lot of new characters. Of course, there are few better subjects for a Lord of the Rings prequel series than the Rings of Power themselves.

There are other possibilities, such as "Young Aragorn" still being the setting and the story will revolve around this map and backstory in some fashion. There's also the delicious possibility that the series will be an anthology one, with different settings and focuses each season, moving back and forth through Middle-earth's history.

Most intriguingly from all of this is one of rights. The Tolkien Estate is working closely with Amazon but, until now, had not confirmed or indicated if it had licensed the rights to any other Tolkien material, as Amazon's deal with New Line/Warner Brothers (itself licensed from Tolkien Enterprises twenty-four years ago) covers only The Lord of the Rings alone. Not even The Hobbit is included, as those rights are tied up with MGM and, after the fiasco of the Hobbit movie trilogy, it was decided not to involve MGM in this new project. However, the detailed account of the War of Sauron and the Elves and names Andrast and Ras Morthil are given only in Unfinished Tales, not The Lord of the Rings. To use those names, at all, Amazon must have reached a new licensing deal with the Tolkien Estate on pain of lawsuits. The previous Middle-earth movies had to go to some lengths not to use any material from Unfinished Tales or The Silmarillion, so the use of such names here is highly telling.

The truth of the matter should become clearer as Amazon continues to reveal more information.
Posted by Adam Whitehead at 00:03

it's way too early to jump to conclusions based on the map.

We still have the following lines of the Ring-verse to be unveiled (so far, with each line, more and more of the map has been revealed)

I'm al for speculation - but it's still too early yet, as Amazon is clearly not finished with the map based on this.