The late 21st Century. A horrendous accident has rendered Earth uninhabitable, scattering the human race across the Solar system. Mars has been terraformed, Venus is in the process of being tamed and the moons of Jupiter and Saturn are now home to billions of people. But this brave new world is also one rife with crime. Ex-cop Jet Black and ex-criminal Spike Spiegel are "cowboys," bounty-hunters working from their converted spacecraft-boat Bebop. Initially happy working alone, they find themselves teaming up with amnesiac con artist Faye Valentine and Ein, a dog who is more than he appears. Together they get into misadventures spanning the Solar system, unaware that their past lives are catching up to them. 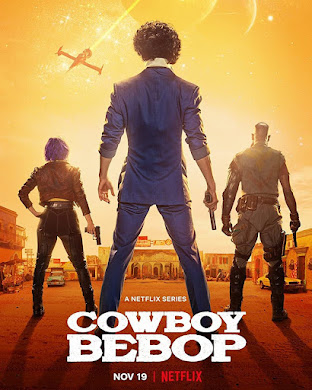 Pity the person who decided that what the world needed was a live-action remake of the classic Japanese animated series Cowboy Bebop. Airing for a single season of 26 episodes in 1998 (along with a spin-off movie), Cowboy Bebop has acquired an almost legendary reputation for its strong characterisation and remarkable blending of tones, from comedy to tragedy to jazz-influenced noir, sometimes in the space of a single episode. With all other anime-to-live-action transitions being rough to terrible, the odds were not looking good for Bebop to make the transition, especially with Netflix developing a bit of a reputation for blandness in recent years.

Fortunately, the live-action Cowboy Bebop ends up working...just about. It helps that the series resists the temptation to be a "dark and gritty" version of the anime, which would have been terrible, and instead leans into its tonal variation and moments of levity. Sometimes it misjudges scenes and moments - dramatic moments end up being a bit too comical, and sometimes comedic scenes come across as a bit too serious - but for the most part it manages to replicate the anime's blending of style and genre.

The show lives by its cast, and although the nagging feeling that John Cho is just a little too old to play Spike doesn't entirely dissipate, Cho's charismatic performance certainly minimises it. He handles the dramatic, tragic, romantic and comedic elements of the character well. Even those minor reservations don't exist when it comes to Mustafa Shakir, who walks Jet Black out of the anime and into live-action with surprising aplomb. Rounding off the central trio is Daniella Pineda as Faye Valentine. Pineda gives a charismatic performance, but Faye is the most changed of the three central characters, with her more reserved, laconic elements from the anime dropped in favour of being more abrasive. and funny. Pineda does great work with what she's given, but live-action Faye feels like a less nuanced (but much better-dressed) character than her animated counterpart.

Arguably the show's biggest success is fleshing out the character of Julia, a noir femme fatale who is pretty one-note in the anime but in live-action is given a much richer, fuller character arc, excellently portrayed by Elena Satine. The writers try to do the same thing for Vicious, the series antagonist, whom in the anime is more a destructive force of nature than a character. That's a good example of something you can do in animation that doesn't really work in live-action, but the solution here of giving him a tedious backstory replete with daddy issues (his father gets an excellent performance by Fringe and Lord of the Rings actor John Noble) and a greatly expanded amount of screentime does not work. Alex Hassell does the best with the material he's given, but he feels miscast and the live-action Vicious is a somewhat unconvincing, brainless thug and a huge letdown from his animated counterpart. Vicious is the weakest link in the live-action version of the series.

The show does replicate the anime's format of having mostly stand-alone episodes (with only really the Vicious/Julia story extending across multiple episodes), a welcome relief in this day of heavily, hyper-serialised shows where the writers have maybe 4 episodes' worth of plot and try to drag them out across eight, ten or twelve hours. Cowboy Bebop's much more focused structure is refreshing, helped by drawing on the anime for most of its episode ideas but not being afraid to mix in some new ideas. The pacing is refreshingly brisk.

The series also adopts a stylised look which has garnered a divisive reaction. Personally, I enjoyed it and found it a huge relief after so many modern shows with washed-out colour palettes, boring camera angles and a dearth of humour. Cowboy Bebop doesn't look like any other show on television, which is a huge plus in its favour (although, okay, it could maybe use a few less Dutch angles). The soundtrack, which mixes the anime's music together with new tracks from the original composer, is also outrageously good and the effects are mostly impressive.

Netflix's Cowboy Bebop adaptation (***½) comfortably emerges as the best anime-to-live-action adaptation to date, with an excellent central cast and a nice line in tonal variation. It can't quite match the original anime's inventive energy and it was probably wise of them not to try. It even improves on the anime in some areas, such as Julia's characterisation and storyline. However, it also disappoints with its depiction of Vicious and how much it spends on his storyline, and its characterisation of Faye is less accomplished than the anime. The late-finale appearance of Ed is also deeply concerning, showing a lack of judgement in how you adapt that (admittedly tricky) character to the screen. Still, there is much to enjoy here and to build on show the show come back for a second season.

The first season of Cowboy Bebop is available worldwide on Netflix right now.

After the bland disappointment that was the adaptation of His Dark Materials, I realized that there's a very specific reason book-to-movie and cartoon-to-movie adaptations nearly universally fail to do the original work justice:

So east is east and west is west, and never the twain shall meet? Possibly - but there is one exception clearly implied by the above: Fantastic literature might be successfully adapted in animation. Watership Down was successfully done, more or less. And then there's this:

Seeing this makes me wonder if His Dark Materials could have been successfully realized as an animated movie.

I loved it. It paid homage to the original while adapting to the times. What really made it work was the interactions of the cast. The actors really got their characters and brought them to life. It was great to see additional depth added to the classic characters. Can't wait for the next season!