The Doctor has fended off a major Dalek invasion in the distant future, but only at the cost of his life. Regenerated into a new form, the Doctor and his companion Rose continue their adventures through the universe and beyond, tackling Cybermen, Ood, clockwork robots, werewoves and the Krillitane, and along the way meeting Queen Victoria, Sarah-Jane Smith and...the devil? 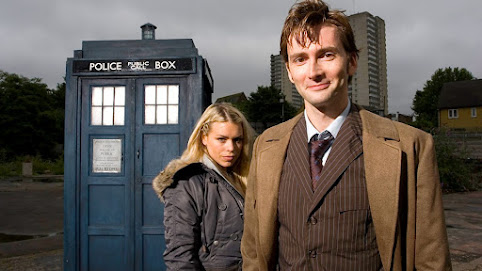 With Doctor Who's return to television in 2005 a qualified success, Russell T. Davies and his team stretched their muscles for their second season, displaying more confidence in what they wanted to achieve. With a new lead actor on board, David Tennant replacing Christopher Eccleston, there was also an excuse to re-explore the character of the Doctor in a new way, as well as a feeling of confidence in linking the new Doctor Who to the old series. The Cybermen, Sarah Jane Smith and K9 all return from the original series this season, although in a way that does not require newcomers to be familiar with the classic series.

Things kick off with The Christmas Invasion, which properly introduces David Tennant as the Tenth Doctor only for him to spend most of the episode asleep in his pyjamas. I sometimes think it would have been better to have committed fully to the bit, having Rose and her friends and family fully save the day whilst the Doctor only wakes up at the end, but I can see that would have been a bit anticlimactic. Tennant impresses on his first outing, his overbubbling enthusiasm being likeable rather than annoying.

This second series of the reboot achieves a higher level of consistency and background quality than the first. Episodes like New Earth and Tooth and Claw don't set the world on fire, but they feature solid performances and tick along nicely. There's also a growing feeling of enthusiasm in the effects and CGI, which in the first season could feel a bit amateur hour but here there's escalating confidence and verve in how the show uses effects.

The series starts shining with School Reunion, which brings back Elisabeth Sladen as Sarah Jane Smith. Sarah Jane was (very) arguably the most popular companion from the classic run of the series, working alongside the Third and Fourth Doctors from 1973 to 1976, appearing in 18 serials over four seasons. She even got her own spin-off pilot, K9 and Company, before returning in the 20th anniversary special, The Five Doctors, in 1983. When the production team decided to bring back a classic companion for the rebooted version of the show, intending to give Rose doubts about how long she could travel with the Doctor and what would happen afterwards, Sarah Jane was the natural choice. The episode is engaging and fun, which also improves the characterisation of Rose's on-off boyfriend Mickey Smith (Noel Clarke). A splendid, scene-chewing villain performance by Buffy the Vampire Slayer's Tony Head is just the icing on the cake.

The highlight of the season, and one of the best episodes of the entire reboot run, is the Hugo Award-winning The Girl in the Fireplace, written by one of the show's best writers at this stage, Steven Moffat. The episode cleverly intersects the Doctor repeatedly with the life of historical French figure Madame de Pompadour, developing a relationship through just hours on the Doctor's side but over thirty years on her's. The episode wins thanks to an excellent guest performance by Sophia Myles and a Moffat script that balances clever timey-wimey stuff with heart.

The Rise of the Cybermen/Age of Steel two-parter is another winner, taking advantage of its parallel universe storyline to further Mickey's characterisation and featuring an excellent (if underused) villainous performance by Roger Lloyd-Pack. The new Cybermen are a great design and it's a good story that rattles along nicely.

Even better is the two-parter The Impossible Planet/The Satan Pit, which is Doctor Who by way of Event Horizon and Sunshine. Arguably the most adult-focused story of the reboot series so far (to that point, any way), the duology makes little concession for young children, with some genuine moments of disturbing horror and a ruthless attitude to dispatching characters. The budget can't quite stretch to everything the story wants to do, but it's an impressive attempt.

The season culminates, as the first did, with an epic two-part finale. Whilst the Series 1 finale was a bit of a mixed bag (mainly down to dated cultural references in the first part), Series 2's is far superior. It's a grab-bag of throwing fun ideas at the wall to see what sticks, but seeing Torchwood and UNIT fending off a Cybermen invasion which is then dramatically complicated when a bunch of Daleks show up is thing of every seven-year-old Doctor Who's fan's dreams going back to the 1970s, which forgives an awful lot of plot contrivance. However, the dramatic ending as the Doctor and Rose are parted forever (or so it seems) is extremely well-played by both actors.

The season does have several sharp moments of weakness, though. The Idiot's Lantern sees Mark Gatiss try to further his reputation as the writer of fun period pieces, but after a strong opening the episode is let down by not giving its villain, played by the reliable Maureen Lipman, enough to do and the episode runs in circles for a bit before reaching a fairly pedestrian conclusion. Fear Her, about missing children on the eve of the then-in-the-future 2012 Olympics, falls flat because of a total lack of concern about the missing kids by the authorities and some iffy guest performances.

The most infamous episode of the season is Love & Monsters, which actually starts with the superb premise of various "civilians" whose lives have brushed against the Doctor's in various ways joining forces to try to find him. However, they instead bond and form a real friendship (and possibly a band), which is upset when an alien with hostile intent uses the group for evil purposes instead. The episode's early promise and excellent guest cast (particularly Marc Warren, Shirley Henderson) are let down badly by the woefully miscast Peter Kay and a rare total failure by Davies in judging tone. The episode moves from being touching to uncharacteristically nasty to just weird, and fails to make it work. One of the very weakest episodes of the reboot series, especially since with a few script tweaks and a recast antagonist it could have been a classic.

The second series of the revived Doctor Who (****) is an improvement on the first, with improved effects, bolder and more inventive storytelling and cleverer ideas. The show is more consistent and David Tennant is a sympathetic, winning lead actor who very quickly shows why he's regarded as the best, or maybe joint-best, actor to have ever played the role. The season is currently available in the UK via BBC iPlayer and in the USA via HBO Max.

I’m not sure Love and Monsters is deserving of quite that low a score. I mean you’re right about the ending but I think it has a certain charm. Warren is excellent, Henderson great and a bit less of the doctor feels quite fresh. Also admittedly Kaye isn’t top drawer but he brings something, at least initially. Girl in the fireplace as you say though is one of the best episodes of the modern Who era.

Thanks for the review, excellent as always