Cry of the Newborn by James Barclay

The mighty city of Estorr has expanded its power and influence over the surrounding kingdoms, forging over the course of 850 years a vast empire known as the Conquord. The supreme ruler of the Conquord, the Advocate, believes that the Empire must expand and conquer to survive. With the empire barely recovered from the subjugation of Atreska, and with bushfire wars along the northern border with the small kingdom of Omari continuing to rage, the Advocate ill-advisedly orders the Conquord's forces to march north-east into the vast neighbouring kingdom of Tsard.

Meanwhile, in the sleepy, isolated village of Westfallen on the Conquord's south coast, four infants are born, the product of five centuries of careful, selective breeding by the Echelon. As the years pass and they grow into adults, the full extent of their remarkable powers becomes clear. But some who learn of their existence consider them affronts to God, and religious fanaticism threatens them as much as the looming threat outside the Conquord's borders... 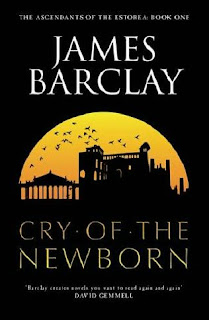 Cry of the Newborn is the first book of The Ascendents of Estorea, a duology which concluded with the recently-released Shout for the Dead. Although several plot strands are left dangling at the end of this opening volume, the novel is more or less self-contained.

James Barclay is best-known for his two trilogies concerning the mercenary band known as the Raven, which regrettably I haven't gotten around to reading. However, upon discovering a chunky trade paperback of Cry of the Newborn going for 99p in The Works, I decided to give it a go, and was pleasently surprised by it. This huge (850 pages in trade) volume depicts colossal battles (at least five I counted, as well as several huge naval engagements, an under-explored arena of fantasy combat), impressive sorcery and intricate politics. Barclay employs a mild revisionist streak in the novel. Instead of a medieval setting, the world is closely based on the Roman Empire. Magic is non-existent until the advent of the four Ascendents, and the reaction to its arrival is fairly realistic. One of the central characters is the Imperial tax collector (how the empire is funded is a major theme of the book). The Advocate, though not without flaws, is hardly the incompetent tyrant more traditional writers might reduce her to. Enormous armies traverse vast distances and, surprisingly, do have to deal with problems of supply lines, reinforcements, keeping their horses fed, equipment shortages etc.

The prose is pretty straightforward, though with flourishes of humour and tragedy at key points (the bodycount in this novel approaches Steven Erikson proportions at times). Barclay's rule seems to be when in doubt, throw in a massive battle sequence. However, the first few such battles seem a bit lacklustre. After about the halfway point they step up a gear and the final engagements are nailbitingly tense. Characterisation is interesting in what archetypes are applied to which positions (as mentioned before, the tax collector Paul Jhered emerges as the most sympathetic character in the book), but character development can be somewhat predictable. One major 'twist' is signposted from pretty much the second the character involved appears. The politics are also somewhat lacking in true depth and are rather unsatisfying in places, particularly in regard to the triangle of intrigue developing between the Advocate, the Marshal Defender of Caraduk and the Chancellor of the Order which had real promise but didn't really go anyway. I suspect this picks up a lot in the second novel though.

To some degree, the reservations are all moot. This book is a huge battle-filled, fast-paced blockbuster and on that level it succeeds admirably, enough to make me want to pick up the sequel at some point. The major complaint is the lack of a map. The military movements in the book are pretty intricate and geography and distance are quite important, but it's impossible to follow given the lack of a guide. Luckily, both the mass market paperback and the sequel do have one (buried in the back of the novel, Tolkien-style).

Cry of the Newborn (***½) is an enjoyable, page-turning and action-packed novel. It is published by Gollancz in the United Kingdom and is available here.

The book does not have a US publisher at this time. The sequel, Shout for the Dead, is available now in trade paperback, also from Gollancz.
Posted by Adam Whitehead at 20:52

Email ThisBlogThis!Share to TwitterShare to FacebookShare to Pinterest
Labels: ascendants of estorea, cry of the newborn, james barclay