In the late 1960s the United States of America successfully created the first Turing Gate, a wormhole that links parallel universes together. In the decade and a half since then the version of the USA that calls itself 'The Real' has linked itself to two dozen other worlds, worlds where the USA is an impoverished wreck, crippled by paying war reparations to Britain and Russia after failing to help them in WWII, to a particularly crazy world where Richard Nixon became president...

The election of Jimmy Carter brings an end to the Real's preferred method of military intervention to bring other Americas around to its vision of peace and democracy. But some in the Real have other ideas about how to expand the USA's influence across the multiverse... 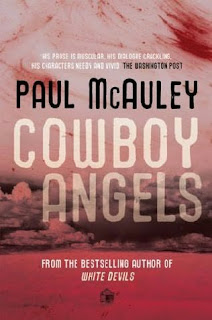 Cowboy Angels is the fifteenth novel by British science fiction writer Paul J. McAuley, best known for Fairyland and The Confluence Trilogy. Gollancz's marketing department has cannily given the book the blurb, "Stargate meets 24," which is more or less accurate (I'd throw Sliders into the mix as well). It's a fast-paced SF thriller encompassing several parallel worlds, temporal paradoxes and against-the-clock races against time. The previous McAuley novels I'd sampled had been more sedate hard SF tales, so this more action-packed story was a bit surprising.

McAuley keeps the story moving along briskly. The science is handled pretty well (although the parallel universes versus temporal paradox conundrums at the end of the book do get a bit head-scratching) and the characters are developed nicely, although Adam Stone is a bit of a stoic protagonist. Whilst the story is complete in itself, there are enough questions left unanswered that McAuley could make a decent sequel for the book.

Cowboy Angels (****) is an enjoyable SF thriller whose vision of a USA planning to spread American cultural imperialism across the entire multiverse is mildly disturbing, but nicely handled in the text. The field of quantum SF used to be a pretty baffling place, but Cowboy Angels is a worthy successor to Brasyl in making that type of story more accessible and interesting to a general audience. Angels doesn't have the superlative prose of the McDonald book, though, but it's certainly a lot easier to read and get into.

The book is available from Gollancz in the UK.

While it doesn't have a US publisher at the moment, copies of the UK edition seem freely available at Amazon.com.
Posted by Adam Whitehead at 21:44

This one has been on my list for a while now. Unfortunately, I can't ever seem to get a response from Gollancz. Guess I'll just have to buy it!