Twelve hundred years ago, a sleeper ship from Earth deposited several thousand colonists on the wild, untamed world of Erna. Seismically active Erna is a harsh planet to survive on, made worse by the presence of the Fae, a source of energy that permeates the elements and can be harnessed by certain humans to further their own ends. Unfortunately, the Fae can also be manipulated subconciously, resulting in the people's fears and nightmares taking on solid form.

With all high technology lost in the birth of a new religion, the colonists of Erna have descended to a Renaissance level of technology, although retaining certain advanced medical, astronomical and scientific knowledge. Damien Kilcannon Vryce, a warrior-priest of the Church and one of the few churchmen able to wield the Fae, arrives in the city of Jaggonath to adopt a new and difficult role in the Church hierarchy. However, when a local Fae-wielder is brutally attacked and her ability to wield the Fae is neutralised, Damien is drawn into a lengthy quest that will lead into the dangerous rakhlands to confront a powerful sorcerer. Along the way Damien is forced into a most uneasy alliance with the cold and arrogant Gerald Tarrant, a powerful wielder of the Fae who has secrets of his own... 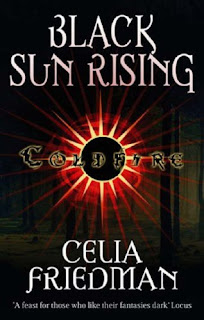 Black Sun Rising (1991) is the first novel in Celia Friedman's Coldfire Trilogy. This SF-epic fantasy hybrid was very highly regarded upon its initial release in the United States, but oddly it wasn't until a year or so ago that Orbit finally published the first UK edition.

The novel is a mixture of the familiar and the use of more original tropes, although the familiar does win out in the end. This is a quest story, with an interesting band of 'heroes' setting out to right a great wrong and travel across a vast chunk of countryside in the process. The world of Erna has some interesting facets to it but the travelling makes for the more tedious part of the book, especially the endless mucking around in caves. Page after page of description of rocks and tunnels does not make for entertaining reading.

Fortunately, Friedman's characters are an interesting, if largely unlikeable bunch. She isn't afraid to kill off major characters and paints them in convincing detail. Less impressive is that secondary characters are not very well developed at all. The rakhs' motivations in particular could have been fleshed out more and one key character who hangs around for a good 150-200 or so pages doesn't even get a name.

The plotline is intriguing and there's no denying that the worldbuilding is quite well-thought-out. The cliffhanger ending comes out of nowhere and the enforced humour at the end of the book doesn't really work as well as intended. That said, the book was enjoyable enough to make me look forward to picking up the second volume, When True Night Falls.

Black Sun Rising (***) was surprisingly disappointing for such a widely-acclaimed novel. The author is a good writer but needs to lighten up a bit. The world is unrelentingly grim but Friedman isn't in the same calibre as Scott Bakker, who can make such a world come alive and become compelling.

You know, initially I was rankled at the idea that you wrote the characters were interesting, if unlikeable.

BUT. Remembering back. Letting the memories flow to me once again... I remember thinking that if we had the point of view of any character (consistently) other than Vryce then this story could suddenly be interesting.

The female: imagine waking up. Knowing who you are, but not what makes you how you speak and act.

The best friend: so torn over his inability. Mocked by the author for his lack of courage, yet shows his courage by continuing every step of the way.

The fake bad guy: his killed his family for the sake of his world. How more interesting could it get?

But we get The Priest. Who doesn't even know what he really stands for. Yawn...

I myself enjoyed all three novels. have read them twice and am currently reading them again. I think they might make an interesting movie trilogy if they decided to make it into one

I agree that the Vryce character is probably the least interesting viewpoint that Friedman could have chosen. On the other hand, in 1991, as a relatively new author, this was still a very impressive book.

In more recent times, I remember being nagged by something in my memory as I read the Peter V. Brett books, starting with "The Warded Man" (or "The Painted Man"). At the time, I just thought it was jet lag messing with my head as I enjoyed the world that Brett had built.