The Inferior by Peadar Ó Guilín

A tribe of humans lives in a vast, crumbling city in the midst of a forested land. No-one knows who built the city or why. The Tribe survives by hunting hostile species for food, or trading flesh with more neutrally-aligned races. When a hunter becomes too wounded or too elderly to endure, they are expected to Volunteer for the flesh-trade. It is a harsh world of kill or be killed, eat or be eaten, where the strong survive and the weak perish.

Stopmouth is a hunter low in confidence due to his constant stutter, overshadowed by his more heroic, intelligent brother. But the Tribe needs them both to survive, when their rival species form an unprecedented alliance and a strange force falls from the skies which will drastically change Stopmouth's life forever... 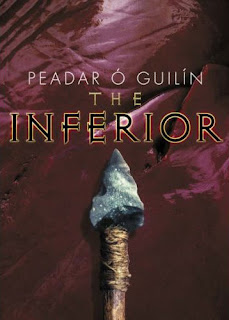 The Inferior, Book One of The Bone World Trilogy, is a refreshingly different type of speculative fiction, channelling many of tropes of fantasy but gradually subverting them with SF ideas as the storyline continues to develop. The world of the Tribe is an intriguing one, a savage landscape where different races battle for survival and for flesh and the good of the many comes before the good of the individual. It is also a world where nothing is as it first appears, and later chapters introduce new races, new locations, new ideas and characters which add to the tapestry of the storyline.

The Inferior is being marketed as a Young Adult series, but it's a fairly harsh book, not skimping on the details of cannibalism or the visceral nature of the hunt and combat. I imagine the author had a great time inventing different monsters and species, with the vile Longtongues and Diggers being particularly unpleasent. The characters are likewise an interesting bunch, from our main protagonist Stopmouth through his two-faced brother Wallbreaker, the courageous Rockface and the enigmatic Indrani. However, outside of this main group it could be argued that some of the other characters are only lightly sketched, and the rather late introduction of a villain and foil for Stopmouth doesn't quite work as well as it should. The other key criticisms are that nowhere on the spine, the cover or indeed inside the book is it revealed that this is a trilogy, so some may find the abrupt ending a bit startling. Finally, a major plot revelation is given away by the book's cover blurb, so be very careful about reading it. Note that the last two issues are faults of the publisher, not the author.

The Inferior (****) is an enjoyable debut novel from a clearly talented author. An intriguingly harsh Darwinian story of life struggling to survive in the face of the environment, this book is different enough from a lot of recent SF&F to make a vivid impression on the reader and leave them wanting more.

The book is availble from David Fickling Books, a subsidiary of Random House, in the UK:
http://www.amazon.co.uk/Inferior-Peadar-Ó-Guilín/dp/0385610955

A North American publisher has picked up the series. Random House USA will publish the book in May 2008.

The author has a website at this location:
http://www.frozenstories.com
He can also occasionally be found ruminating on the SF&F scene at the Westeros.org forum.

The Book Swede has a review here:
http://thebookswede.blogspot.com/2007/08/inferior.html

The Bookbag has another review here:
http://www.thebookbag.co.uk/guilininferior.htm

This month's issues of Death Ray and SFX magazines both have reviews for the book, Death Ray awarding it five stars and stating it wil remind readers of why they got into speculative fiction in the first place. SFX is more restrained, awarding it two-and-a-half stars and stating that the exceptional first half is let down by a more predictable plot route in the second half. I disagree with the latter, mainly as the finale subverts that expected plot development quite nicely and also that the target audience will probably not be familiar enough with the tropes of the genre to find it a problem. However, I am confident that more experienced readers of the genre will likewise enjoy the novel.

An official launch for the book is also being held in Borders Bookstore, Blanchardstown, County Dublin, Republic of Ireland at 7pm on Thursday 13 September.
Posted by Adam Whitehead at 19:34

Your review might have moved it up a bit in the batting order!;-)

I'm glad you liked it, and thanks for linking to my review :)

I'll include a link to you in my interview with Peadar :)

I have marked my calendar for May of next year.