Hunter's Run is an unusual book. Gardner Dozois started writing it in 1977 but got stuck, so passed it over to George RR Martin, who wrote an additional block of the story in 1981 before getting stuck himself. In 2003 or thereabouts, the aborted story was finally completed by Daniel Abraham and published in novella form the following year as Shadow Twin. Now Abraham has gone back and re-structured the story as a full-length novel, a story some thirty years in the making. 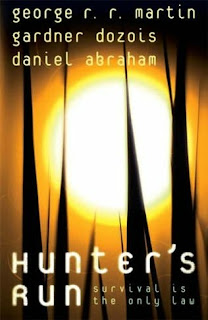 The planet is San Paolo. Ramon Espejo, a colonist from Mexico, has killed a man in a bar fight and fled into the wilderness to evade justice. In a remote mountain range he uncovers a surprising presence, and is forced into a flight for his life over a vast and dangerous stretch of countryside, with a remorseless hunter behind him and an uncertain reception ahead...

Hunter's Run is not a convoluted multi-stranded narrative with a cast of thousands. It is a simple story at heart, the exploration of what makes a person a person, but with complexities of emotion that run from it being written by three of the best character-builders in modern SF&F. Espejo is not a likable protagonist, but his actions are understandable and as the book progresses the reader sympathises with him more. The alien biosphere is well-described, the city of Diegotown comes to life vividly, the writing is crip and fast-paced, with each chapter and incident leading into the next in rapid succession. The alien characters are intriguing and there is a sense of a much larger story waiting to be told, of which this is the tip of the iceberg. Whether these three writers will collaborate again or not is uncertain, but I certainly hope that if they do, we won't have to wait thirty years for it.

Hunter's Run (****) is a strong novel from three of the leading voices in the genre today. It is published by Voyager in the UK and by both Eos and Subterrenean (as a limited illustrated edition) in the USA.
Posted by Adam Whitehead at 16:27