Shout for the Dead by James Barclay

Shout for the Dead is the conclusion to the Ascendants of Estorea duology which commenced with Cry of the Newborn, which I reviewed here.

Ten years have passed since the events of the first book. The Estorean Conquord is riven with discontent as the Advocate sponsors the development of the Ascendents, whilst the Order is implacably opposed to them. With religious strife threatening the Conquord with dissolution, the Tsardons launch a renewed invasion, this time with the 'fallen' Ascendant Gorian providing them with vast armies of undead warriors. The Conquord is forced into a military confrontation it cannot win whilst the only people who can stop Gorian are also the most feared and reviled people in the empire... 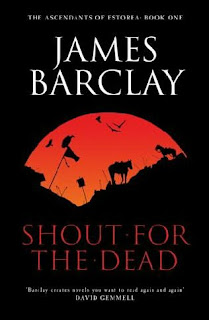 I was disappointed by Shout for the Dead. Cry of the Newborn set up an interesting premise with impressive, exciting battle sequences and fast-paced storytelling (despite its mammoth size) which more than made up for its lack of in-depth characterisation and its sometimes workmanlike prose. That book was basically an action blockbuster with some interesting ideas on the introduction of magic into a nonmagical world and on that level it worked well.

Shout for the Dead feels somewhat laboured. I get the impression from comments in interviews and on his website that Barclay struggled with the book, and that comes through here. Characters vanish with no explanation (whatever happened to the King of Atreska and Megan, the politician who replaced him?) and Barclay fails to make the battles as compelling as in the first book, perhaps because they almost entirely consist of vast hordes of zombies marching over the opposition. The only bits where the book explodes into life are when the Ocetanas turn up and start kicking some serious ass. The scene where Iliev takes on a bunch of undead single-handed is superb ("Gentleman, I'll be needing my papers,"). The naivete and stupidity of certain characters is also incredibly annoying, and the ending is rather unsatisfying.

Shout for the Dead (**) is a disappointing and lacklustre conclusion to what promised to be an entertaining action series. However, there was plenty of promise in the book, and I really enjoyed the adventures of the Ocetanas. Hopefully they will be front and centre if Barclay ever chooses to return to this world.

The novel is available in mass-market paperback from Gollancz in the UK.
Posted by Adam Whitehead at 00:20

Email ThisBlogThis!Share to TwitterShare to FacebookShare to Pinterest
Labels: ascendants of estorea, james barclay, shout for the dead