Riding the Unicorn by Paul Kearney

John Willoby is a former soldier turned prison officer: strong, stoic, disciplined. But his home life is empty and hollow. His daughter despises him, his wife is a stranger. When Willoby starts having visions of a fresh verdant land and hears voices in his head, he must face the prospect that he is going mad...

The Kristill are a hardy race of warriors who thrive on horseback. Driven from their homeland by an alliance of opposing tribes, they have been forced to cross a towering mountain range to seek a new homeland. The bastard son of the king and his friend, a mage of tremendous power, hatch a plan to remove the king from power, a plan that requires an ally from another world... 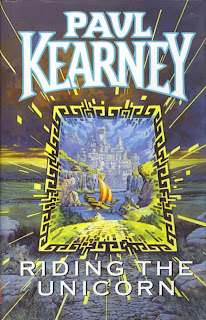 Riding the Unicorn was Paul Kearney's third novel, published in 1994. Unliked his later books, which are wholly secondary world-set stories, these early books are a blend of fantasy with 'real-world' protagonists either crossing over or being influenced by fantastical forces. An obvious touchstone with Riding the Unicorn is Stephen Donaldson's Thomas Covenant series, with it being rather ambiguous whether Willoby is really experiencing what he appears or if he is merely insane. Although the narrative leads us to conclude that Willoby's experiences are real, that sense of someone fearing they area losing their mind and being both terrified and exulted by the prospect comes across superbly.

This is a rather downbeat book, an examination of murder, betrayal, manipulation and dysfunctional families. At the same time it's not quite as relentlessly bloody as some of Kearney's other works and there are strong elements of hope present in the finale of the novel. The imagery is superb: we are given just enough information on the Kristill odyssey through the mountains to make it seem a truly epic journey on a par with the exodus of the slaves from Egypt. Kearney's assured grasp of character is present and correct: Willoby is not a nice man but is presented as a complex, flawed protagonist, as is his manipulator, Prince Tallimon. Merrin, the woman who links them both, is a tragic figure, whilst the relatively minor player of Cardillac emerges as a reluctant observer of events, powerless to thwart them no matter how much he may wish to.

Weaknesses? The book's title may be seen as highly misleading: it's a quote from a book on schizophrenia. There are no unicorns in this novel. As is usual with Kearney, some may decry the shortness of the novel (254 pages is barely enough for some modern authors to clear their throats) but my view is that a novel that is short and leaves the reader begging for more is better than one that is over-bloated and leaves the reader feeling stuffed on tedious verbosity. Aside from those minor observations, this is an exceptional book and it is frankly criminal that it is no longer in print.

Riding the Unicorn (****½) is a gripping, fascinating fantasy novel and well worth the trouble of seeking out. It was published in 1994 by VGSF (as Gollancz's paperback division was formally named). Copies can be tracked down via Fantasticfiction.com.

Kearney's next published novel will be The Ten Thousand, one of my top fantasy picks for 2008, which will be published in August. His classic Monarchies of God series will follow in two omnibus volumes shortly thereafter. All will be published by Solaris. He maintains a website at this location.
Posted by Adam Whitehead at 22:40