CBS All Access has commissioned its fourth Star Trek TV series, this time a live-action spin-off series focusing on Section 31. Michelle Yeoh will star, reprising her role as the Mirror Universe version of Phillipa Georgiou. As established in Star Trek: Discovery's first season, Georgiou was the Emperor of the Terran Empire in that universe and was brought into the "prime" universe and left there, after helping the crew of the Discovery end a war with the Klingons. 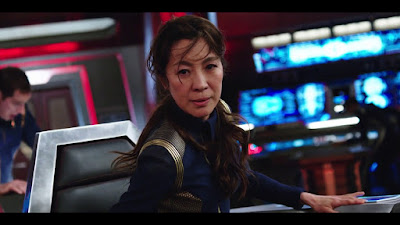 Despite Discovery's own relative youth - the show's second season only starts airing next week - it has already spawned two other spin-off shows. A series set 20 years after Star Trek: Voyager and the movie Nemesis is in pre-production and sees Patrick Stewart reprising his role as Jean-Luc Picard. Pulitzer Prize-winning author Michael Chabon is on the writing team for that series, which promises to be interesting. Apparently it is currently planned as a mini-series with the potential to spawn a further series if it is a success (although the long-term commitment of Stewart - who turns 79 this year - is unclear). An animated series called Lower Decks is also in pre-production.

The news of Michelle Yeoh starring in a new TV show - Star Trek or otherwise - is very interesting and welcome, although there is also a feeling that perhaps CBS is running before it can walk by introducing so many projects so quickly, before Discovery itself is a proven long-term success. Still, it'll be interesting to see what comes of these shows.
Posted by Adam Whitehead at 20:32