Buffy and her friends have defeated the Master, closed the Hellmouth and prevented the end of the world. No sooner has the dust settled then two new vampires arrive in Sunnydale looking to pick up where he left off: Spike and Drusilla. As Buffy prepares to fight this new threat, she has no idea that an even greater danger is lurking much closer to home. 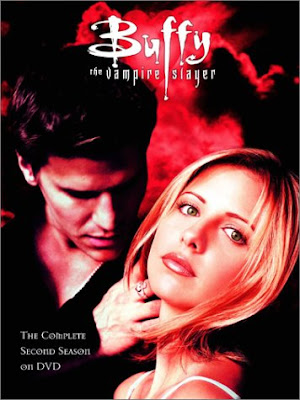 The first season of Buffy the Vampire Slayer was promising but, it has to be said, rocky around the edges. It took quite a few episodes to really hit its stride, but by the end of the season it was firing on all cylinders. Season 2 continues in this vein, with a greater confidence in the premise and characters, leading to stronger dialogue and more interesting characterisation.

There's also a nice line in irreverence towards the show's own mythology. Having set up the Anointed One in Season 1 as the heir to the Master's mantle, Spike and Dru showing up instead wrong-foots the audience. This is in the best possible way, because James Marsters (and his masterful English accent) and Juliet Landau (and her...less accomplished accent) fairly explode off the screen with glee and wild abandon, upping the energy level of the series considerably.

The first half of Season 2 is pretty zippy, in fact, with fast-paced episodes mixing action, mystery, backstory and romance. We get more information on Giles's background with the introduction of his nemesis, Ethan Rayne (Robin Sachs), which makes Giles a far more interesting character, and the introduction of a new character named Oz (Seth Green) who quickly becomes a key new ally of our heroes (and a love interest for Willow). This first half of the season does have few disposable episodes (Inca Mummy Girl is a marginally-less-terrible cover version of Teacher's Pet, Reptile Boy is forgettable, Bad Eggs is legitimately awful) but it does more than make amends with episodes like School Hard, which is Buffy's take on Die Hard (kind of) and Halloween and The Dark Age, which expand on Giles's backstory, along with the two-parter What's My Line, where Buffy goes up against Spike and Drusilla, helped by an unexpected ally.

And then everything changes.

Even in the late 1990s, when almost all American TV dramas aired 22 episodes a year, Joss Whedon seems to have recognised the problem in sustaining a single story arc over that length of time (Season 1 didn't have the issue because it was only 12 episodes long). His solution was to simply chop the season in half and have two distinct storylines, the one in the first half of the season leading naturally into the second, usually with an escalation of villain. This trick of upping the ante halfway through the season would eventually get a bit predictable in later seasons, but here it feels quite fresh, mainly because it comes almost out of nowhere. Before you know what's going on, Buffy and her friends are fighting an enemy who knows them better than they do themselves and has no problem killing off major recurring characters on a whim.

This gives the second half of the season a bleak and desperate feel to it, punctuated by real moments of horror and tragedy that you wouldn't have believed the show was capable of in Season 1 (the episode Passion, in particular, is a masterpiece of tension and darkness). The stakes constantly get higher and things culminate in a season finale which even Shakespeare may have drawn the line at for being "too tragic," helped by Christophe Beck's mighty score.

If there is a major problem with Season 2, it's that Whedon may have peaked too soon, and he has since admitted that this storyline should have played later in the series for a much more powerful impact (although in that case we may have never gotten Buffy's spin-off series, which would definitely have been a shame). As it stands, this story gives Season 2 real teeth and leaves the viewer wondering how they can possibly top it for the third year.

The second season of Buffy the Vampire Slayer (****½) is a huge improvement over the first, adding a strong sense of tragedy to the show's action, comedy and romantic stylings. A string of iffy episodes prevent the second season from being the best, but arguably the season has the most compelling arc of the seven (or twelve, counting spin-off show Angel), it being the storyline that most effectively hits Buffy where she lives. The season is available now as part of the complete Buffy the Vampire Slayer DVD box set (UK, USA).
Posted by Adam Whitehead at 21:20