Buffy and her allies have saved the world, but at a terrible cost. Angel is apparently lost forever, several key friends of the group are dead and the survivors are traumatised. Worse, Buffy herself has skipped town to try to recover from the chaos of the previous year, leaving her friends to hold down the fort in Sunnydale. Buffy's path leads her from the darkness of Los Angeles back home, where a new threat is rising. 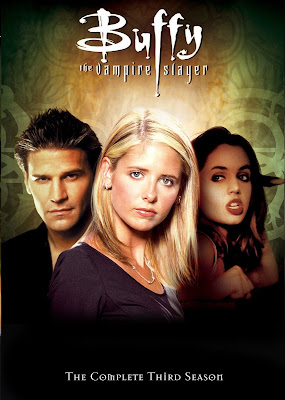 The third season of Buffy the Vampire Slayer is, arguably, the show's most consistent. There's a very strong, large number of excellent episodes and the season arc is rich with dramatic possibility, pitting Buffy as it does against her own reflection and shows what she could have become if she'd chosen a darker path.

The result is Buffy's most dramatically accomplished season (even if the individual best-ever episodes of the series are still to come in later seasons), with very few weak episodes and several outstanding ones. This is the show firing on all creative cylinders, with the writers, directors and actors all at the top of their game. New castmembers like Eliza Dushku as Faith, Harry Groener as the Mayor, Emma Caulfield as Anya and Alexis Denisof as Wesley all fit into the show with ease like they've always been there, and there's a great mix of stand-alone episodes, arc-heavy stories and even a couple of conceptually bold pieces, like The Wish, an interesting look at an alternative universe where Buffy never came to Sunnydale, instead being diverted to fight the ultimate evils of the world in Cleveland.

The season isn't completely flawless, however. Angel's inevitable return leads to some dramatic angst, but this going on for the whole season eventually becomes a little old, with the writers clearly running out of ideas of what to do with Angel long before the end of the season. Their solution, to spin him off into his own TV show, is ultimately a brilliant one (Angel arguably being a more consistently high-quality show than Buffy itself) but it takes a while to get there. There's also a similar issue where it feels like the writers are keeping Oz (Seth Green) around because they liked the character and actor, but don't really give him very much to do. His somewhat abrupt decision to quite the show early in Season 4 when it became clear the same thing was happening again is understandable, although regrettable.