Gratuitous Lists: List of DOCTOR WHO Doctors by appearances and tenure

New year, so a new series of Gratuitous Lists! These lists don't need to exist, but here the hell they are anyway. First up, a list of Doctors in Doctor Who, by appearances and tenure. 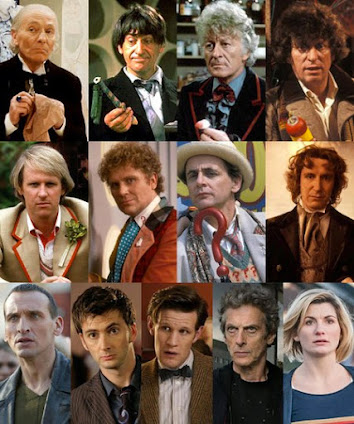 This list is divided into two formats. First up is a list of the Doctors by the number of appearances they made. This, very roughly, translates as how many episodes they were in (inspired by the methodology in this Reddit post). However, because the length of Doctor Who episodes has fluctuated dramatically over the years, I had to massage these figures to make them fair. So an appearance corresponds to a 25-minute episode, the average length of Doctor Who episodes from 1963 to 1989 and the base "unit" of Doctor Who, if you will. For the modern era of Doctor Who, with episode lengths ranging from 45 minutes to 75 minutes, I combined the lengths of all the episodes for each run and then divided them into 25-minute increments to get their approximate screentime. The only way to be more accurate is to rewatch all 500+ hours of the entire series with a stopwatch, which is going too far even for me.
An appearance includes any new material shot for that Doctor, including their "main" run on the show and subsequent reunion episodes. This also includes material with new actors playing the Doctor. It does not include appearances of the Doctor in archival footage only. So, for example, the First Doctor's appearances in Listen and The Five Doctors count, even if the Doctor is played by a different actor to William Hartnell, but his archive-only footage from The Name of the Doctor and Day of the Doctor is not counted.
Appearances only as part of the Doctor Who TV show are counted. Appearances in various BBC science programmes or spin-offs such as The Sarah Jane Adventures and Class are not counted. The non-canonical Dimensions in Time and Curse of the Fatal Death are also ignored. However, the canonical Time Crash and The Night of the Doctor are included. Out-of-universe fictional stories about the making of the programme, such as An Adventure in Space and Time and The Five(ish) Doctors Reboot, are also not counted.
The second format is by tenure, that is the length of time each Doctor was the "current" Doctor on-screen. This was more straightforward. I counted the tenure of each Doctor starting from the end of the previous regeneration, with the new actor identifiable on screen. So this counts Jon Pertwee's stint as the Third Doctor beginning from the start of Spearhead from Space, not the previous serial The War Games, because the regeneration was not complete at the end of The War Games. However, the Fourth Doctor's tenure is noted as beginning at the end of Planet of the Spiders because Tom Baker appears in the role (albeit comatose with no dialogue). The new show's unofficial rule that the new Doctor gets a few lines of dialogue before the episode ends has made this a bit easier as well. 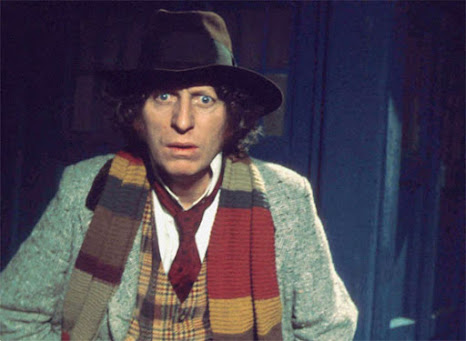 The Fourth Doctor (Tom Baker) is the most prolific Doctor in terms of appearances in the role, as well as having the longest tenure when treated by contiguous appearances. However, he is notable for only returning to Doctor Who after his initial run through either earlier-shoot footage (in The Five Doctors) or by playing a later incarnation of the Doctor, as "the Curator" in 2013 special The Day of the Doctor.
List of Doctors by Appearances
As expected, the Fourth Doctor as played by Tom Baker wracks up the largest number of appearances by his sheer longevity: he starred as the Doctor in seven full seasons of the show from 1974 to 1981 and made a brief comeback in The Five Doctors, albeit in scenes shot for a serial that was left incomplete due to industrial action (I have counted The Five Doctors but not Shada for this reason; if you count Shada as being completed later on through animation and audio voiceovers, you can increase his count by 6 and arguably decrease his count for 2 for The Five Doctors, as he only appears at the start and end of the serial).
The First Doctor gets the prize for the longest span of appearances, with just over 54 years elapsing between his first appearance in An Unearthly Child (1963), played by William Hartnell, and his last appearance in Twice Upon a Time (2017), played by David Bradley. His already-formidable appearance count is buoyed even further by return appearances in anniversary specials The Three Doctors (1973) and The Five Doctors (1983) and brief appearances (as a young child) in Listen (2014) and, also played by Bradley, in The Doctor Falls (2017).
Most of the other counts are self-explanatory: the Eleventh Doctor gets an extra appearance by appearing in specially-recorded, brand-new footage for Deep Breath (2014), and the Fifth for his appearance in 2007 mini-episode Time Crash. So far, the Sixth, Ninth and Twelfth Doctors are anomalous for not getting any further on-screen reprisals of their roles after their main period of incumbency ends; the Twelfth Doctor is so far unique in that he gets a pre-prisal by appearing in The Day of the Doctor before his main period as the Doctor commences. The Sixth and Ninth do appear in archive footage in Day of the Doctor, though.
If you wish to count the War Doctor as played by John Hurt in 2013, his appearance count would also be 4, consisting of three for The Day of the Doctor and his appearance at the end of The Name of the Doctor. The Night of the Doctor uses archival footage of John Hurt as a young man, so is not counted. He'd be equal with the Eighth Doctor, but the Eighth Doctor would break the tie because his 1996 TV movie was a 90-minute special as opposed to the War Doctor's 75-minute special, and the Eighth Doctor's greater period of incumbency (1996-2005), being a numbered Doctor and having a larger number of spin-off appearances.
The Fugitive Doctor as played by Jo Martin has appeared in three episodes (Fugitive of the Judoon, The Timeless Children and Once, Upon Time), though she only has a major role in Fugitive and cameos in the latter two episodes. This would arguably make her appearance count as 4 as well (to date).
The Curator, as played by Tom Baker in The Day of the Doctor, qualifies for 1 appearance as well (to date). 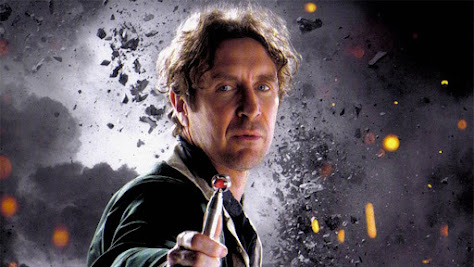 The Eighth Doctor (Paul McGann) had the shortest period of contiguous appearances as the Doctor (just 90 minutes) whilst simultaneously being the actor longest in the role as the "current" Doctor (from 1996 to 2005). He also holds the record for the longest period between his regeneration from the previous Doctor (in the 1996 TV movie) and his regeneration into the next one (in 2013 flashback mini-episode The Night of the Doctor).
List of Doctors by Incumbency:
Thank you for reading The Wertzone. To help me provide better content, please consider contributing to my Patreon page and other funding methods.
Posted by Adam Whitehead at 17:17