News has sadly broken that the actress Louise Fletcher has passed away at the age of 88. Fletcher is best-known for her terrifying and Oscar-winning turn as Nurse Ratched in the 1975 film One Flew Over the Cuckoo's Nest, but SFF fans will more likely recognise her for her nuanced, intriguing performance across all seven seasons of Star Trek: Deep Space Nine as Kai Winn. 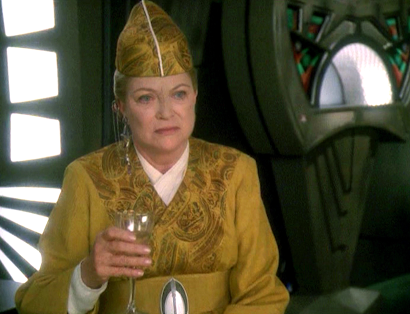 Fletcher was born in 1934 in Birmingham, Alabama. Both of her parents were deaf and worked with hard-of-hearing communities across the south-eastern United States. Fletcher did not share this disability, but learned sign language, and signed her Oscar acceptance speech for them.

She became interested in acting at school and got her first gigs working in Westerns, notably the TV series Lawman (1958). Fletcher noted that she was somewhat taller on average than most women and this stood her in good stead for Westerns and crime dramas which typically attracted taller-than-average male actors. After a number of minor roles in films and television series from 1958 to 1963, she took a break from acting for a decade to raise her two children. She returned to acting in 1973 and very quickly won the role of Nurse Ratched in One Flew Over the Cuckoo's Nurse. She thanked the audience for hating her during her Oscar acceptance speech.

Despite the Oscar win, Fletcher's career did not take off as many expected, something she attributed to her age (she was 41 when she accepted the award). She appeared in mostly lower-profile films from then on (with the exception of Cruel Intentions). She had better luck in television, appearing in shows like Shameless, Heroes, ER, Wonderfalls and Picket Fences. She picked up two Emmy nominations for her roles in Picket Fences and Joan of Arcadia.

In 1994 she made her first appearance in Star Trek: Deep Space Nine, appearing in the Season 1 finale In the Hands of the Prophets as Vedek Winn, a hardline religious leader on the planet Bajor who often appears in an antagonistic role to Commander Sisko and his Bajoran executive officer, Major Kira Nerys. The writers initially wrote her as a villain, but showrunner Ira Steven Behr came to love her performance so much that he decided to make her a much more ambiguous figure, several times having her as a good guy keep even more hardliners in check.

At the end of Season 2, Winn became the Kai or spiritual leader of the entire Bajoran people, resulting in an ever-more complex relationship with Sisko and Kira. In subsequent seasons, Winn varied between being a complication - or sometimes outright antagonist - with the main characters but also an ally, whose own viewpoint was sometimes shown to be correct, or at least sympathetic. In the final season Winn's faith is tested when she discovers how she has been manipulated by Gul Dukat into working for the evil Pah-Wraiths, and throws herself into the role of being an outright villain. At the last moment, though, her faith in the Prophets returns and she briefly thwarts Dukat's plans at the cost of her own life, allowing Sisko to defeat him for good.

Fletcher's nuanced performance of the character across seven seasons was impressive, and her impact on the show was seismic: she only appeared in 14 out of 176 episodes but is often cited as one of the best actors and most influential characters on the series.

Many obituaries have suggested that Fletcher was constantly underused and underrated in Hollywood, and was not given the chance to capitalise on her Oscar win as perhaps she should. Whilst that is true, Louise Fletcher also gave us two excellent, memorable villains on screen, one in film and one in television, and that is no mean feat.

Louise Fletcher is survived by two children, and she will be very much missed.