News has sadly broken that Kevin Conroy, best-known for voicing Batman across numerous animated series and video games over thirty years, has passed away at the age of 66. 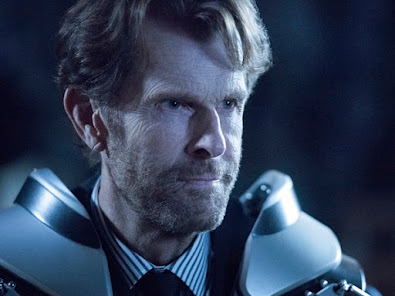 Who was he? He was the goddamn Batman.

Born in Westbury, New York, in 1955, Conroy studied drama in New York City. He was room-mates with Robin Williams and was in the same study group as Kelsey Grammar. After graduation he started working in the theatre and, starting in the early 1980s, began splitting his time between stage acting in NYC and TV acting in Los Angeles.

Conroy achieved his first breakthrough by being cast as lawyer Bart Fallmont on Dynasty. By the end of the 1980s he had become a regular guest castmember on various American TV shows including Cheers and Murphy Brown, and a regular on Vietnam drama Tour of Duty.

Conroy's gravelly voice made him the natural choice to voice Batman and Bruce Wayne in Batman: The Animated Series (1992-95). Taking his cue from Michael Keaton in Tim Burton's two films, Conroy gave Batman and Wayne different voices to help hide the character's secret identity. Conroy continued to voice Batman in spin-off shows The New Batman Adventures (1997-99), Batman Beyond (1999-2001), Justice League (2001-04) and Justice League Unlimited (2004-06). He also voiced Batman in the theatrical movie Batman: Mask of the Phantasm (1993) and various straight-to-video and DVD projects. He also played Batman during guest spots on related DC shows, such as Superman: The Animated Series (1996-2000).

Conroy returned to the role for the Arkham series of video games: Arkham Asylum (2009), Arkham City (2011) and Arkham Knight (2015) (he skipped 2013's prequel, Arkham Origins, which featured a significantly younger and less-gravelly Batman). The games gained blanket critical acclaim and introduced Conroy to a younger audience who hadn't grown up with the prior animated series. Conroy's co-star from The Animated Series, Mark Hamill (who played the Joker), noted that his pleasure in working with Conroy was such that he would sign onto projects without seeing a script if he knew Conroy was involved.

In 2019 he finally played the role in live-action, starring as an older alternate-universe Bruce Wayne in the CW's Batwoman (as part of their Crisis on Infinite Earths crossover event).

Conroy's immense popularity led to voicing gigs on many other shows, including The Venture Bros. and the various recent He-Man projects for Netflix.

Kevin Conroy passed away on 10 November from cancer. He is survived by his husband, Vaughn C. Williams.

With the physical actor playing Batman constantly changing, Conroy arguably became the definitive voice of the Caped Crusader, one of its most popular players and the longest-running and most prolific actor in the role when counted by the sheer number of episodes, films and video games he appeared in. The impact he had on an entire generation of kids growing up should not be underestimated; during search and rescue efforts after 9/11, Conroy helped out providing food to emergency responders and, at a friend's urging, geed up the police and firemen with Batman lines. He will definitely be missed.