With Battlestar Galactica's fourth season delayed until April and its full run likely to be interrupted by a year-long break due to the ongoing Writer's Strike, the Sci-Fi Channel has seen fit to deliver us an extra treat, namely a special episode or TV movie delving deeper into the show's backstory. 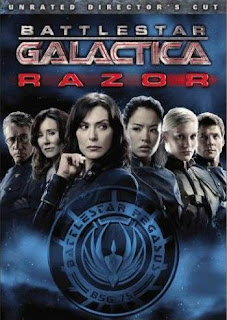 Razor takes place at the end of the second season, shortly after the events of the episode The Captain's Hand. Lee Adama is now commander of the battlestar Pegasus, but as an outsider he finds himself not entirely trusted by his new crew. Lee decides to appoint a former favourite of Admiral Cain's, Lt. Kendra Shaw, to the position of XO, in an attempt to 'build bridges' with his new subordinates. Interestingly, the plot doesn't dwell on this idea. We know the fate of the Pegasus and Lee's command of her from other episodes and seeing him do a 'winning the respect of the crew' plotline would have been redundant. Instead we see much of the story through Kendra's eyes. Lengthy flashbacks take us back to the day of the original Cylon attack on the Colonies and we see Kendra rising through the ranks and observing Cain's gradual moral erosion as the tensions of command take hold. A present day storyline, which is little more than a subplot, sees the Pegasus crew stumble across a bunch of obsolete Cylons from the First Cylon War and have to eliminate them.

Razor straddles two stools. On the one hand, it is a balls-to-the-wall action story with huge, epic CGI battle sequences and lots of emotional intensity which is designed to appeal to newcomers as well as established fans. On the other, it features a lot of fan-pleasing asides and references to the original series. This is a somewhat odd idea (going for newbies and hardcore fans at the same time) but just about works, with the new character of Kendra providing a worthwhile 'in' to this story and universe for new viewers but at the same time allowing established fans to see stuff they've wanted to see since the series began. Kudos for the writers for managing not to make a total hash of this.

The TV movie lives or dies on the performance of actress Stephanie Chaves-Jacobson as Kendra Shaw and thankfully she delivers a competent performance. She tended to mumble a fair bit, however, which resulted in much rewinding of scenes to make out what she was saying. The actress has a great rapport with Katee Sackhoff and Michelle Forbes, and in these scenes she is extremely good. The other actors are as trusty and reliable as ever, although some have very little screen-time (Athena and Tigh get a single scene each, President Roslin three short scenes and Dr. Baltar is totally absent).

Overall, Razor (****) is an enjoyable slice of Battlestar Galactica and just about fills in the yawning gap between Seasons 3 and 4 (which will have been an endurance-testing 13 months long). Some elements misfire a bit (the "By your command," moment, although amusing, totally breaks the fourth wall) and the resolution's dependence on yet more BSG mysticism is mildly exasperating, but overall the TV movie fulfils its remit of being both entertaining and restoring faith in the show after a patchy third year.

Razor will be released on DVD in the United States on 4 December, and in the UK on 26 December. The DVD edition will be extended by some 15 minutes and will feature a lengthy flashback to the First Cylon War (complete with another huge battle sequence) as well as other new scenes.

Forthcoming: Battlestar Galactica returns with its fourth season premiere, He That Believath in Me, in early April 2008.
Posted by Adam Whitehead at 18:15

I'll be trying to find time in my 'hectic' revision timetable to check out razor on Sky One this Wed...