I've been promising to add game reviews to the blog since it started, partially because I feel that modern computer games are on the cusp of becoming a valid and worthwhile artform in their own right but mainly because I play a lot of games and would like to use them as basic review fodder to pad out the blog and make it look like I'm taking the job seriously.

With this in mind I thought it would be a great idea to focus on one of the narrative-heavy, character-based SF&F games like Anachronox or Planescape: Torment and ponder their artistic merit. Then I remembered I haven't played those games in years and they both take days of non-stop playing to get through, so I thought sod that, I'd choose something more lightweight and with more explosions. Thus: 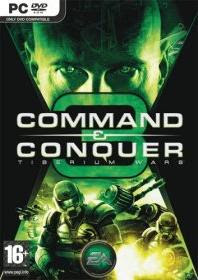 The Command and Conquer franchise is one of the biggest-selling PC game series of all time, shifting upwards of 10 million copies. The original game was published in 1995 and was one of the first real-time strategy games, a genre which contends that realism is overrated in wargames and being able to construct a tank factory in ten seconds flat and be churning dozens of tanks out directly onto the battlefield three seconds later is more fun. Ironically, the original Command and Conquer is one of the slower-paced games in the genre, with a difficulty level somewhere on the wrong side of frustrating and a unit selection that can helpfully be called 'retarded', meaning you just end up churning out fifty heavy tanks and hoping for the best. A bit embarrassed by this, the original game designers brought out an alternate-reality take on the series called Red Alert which ironically became far more popular than the original game, partially because of the chic retro-Cold War vibe and sassy unit selection but perhaps mainly because it was very self-critical and camper than a night out at Butlins in the company of Graham Norton and Frankie Howard on helium.

Of course, the analytical reader may have hit on the idea of combining Red Alert's faster-paced gameplay with C&C's more hardcore SF trappings to produce a much more interesting game, in which case well done, because you were eleven years faster than the guys at Westwood and EA. Command and Conquer's sequel, Tiberian Sun, was even more grim, po-faced and slower-paced than its progenitor (with even James Earl Jones' cameo not enough to save it), whilst Red Alert 2 took the camp overload of the original and pushed it beyond the capacity of the rational human mind to absorb. Luckily, at this point the original development team imploded and EA forced the survivors to work in their digital sweat-shops for several months churning out Lord of the Rings tie-in games of variable quality until they promised to get with the programme and actually produce a game that is decent.

Hence, Tiberium Wars, the third Command and Conquer game (not counting expansion packs). This time the story picks up in the mid-21st Century with Earth overrun by tiberium, a crystalline compound that came from outer space on a meteor and has now infested the planet, rendering most of it uninhabitable and forcing the survivors into high-tech cities defended by the Global Defence Initiative (GDI). A group of religious fanatics, the Brotherhood of Nod, have come to believe that tiberium holds the key to immortality and basically, erm, wage war on GDI so they can have access to more tiberium, even though it covers most of the planet's surface and GDI aren't really interested in stopping them outside the cities. The plot isn't exactly watertight. Anyway, after ten years of peace the Brotherhood of Nod mounts a surprise attack against GDI, overrunning many of their defences and putting them on the back foot. Oddly, because it's happened twice before, the Brotherhood are surprised when a confident new commander (i.e. you) arises amongst GDI's ranks and kicks their backsides across the planet.

The game's plot is communicated via fully-acted cut scenes and briefings which EA have cleverly filmed using actors who are likely to get the average SF&F film or TV fan jumping up and down and going, "Hey! That's whatshis face from, erm, that show!" As such, Grace Park and Tricia Helfer pop up from Battlestar Galactica, Billy Dee 'Lando' Williams drops in from Star Wars, Josh Holloway from Lost gets a look-in and Michael 'Needs a New Conservatory' Ironside phones it in. Long-term fans of the series are probably more excited by the return of Joseph Kucan as Kane, one of most recognisable villains in gaming history. The narrative cut-scenes are reasonably well-written and, as with previous games in the series, there does seem to be a genuine attempt to suggest that Nod have a genuine philosophical motivation behind them rather than being a bunch of lunatic religious nutcases implausibly armed with high-tech weaponry. As usual this falls flat on its face around the time Kane tells you (in the Nod campaign) to start nuking everything in sight. That said, individual elements in the GDI are painted much greyer than before and some of the orders you receive in the GDI campaign are frankly disturbing.

The gameplay is the traditional, "Build base, build army, crush enemy" format we have seen fifty times before. However, for a C&C game the pacing has been ramped up to levels that can be called 'bonkers'. You can go from building you first structure to churning out Mammoth tanks (ludicrously overpowered GDI war machines which have great anti-ground, anti-air and probably anti-dandruff weapons and frankly mean you never need to build anything else) in about three minutes, which seems indecently quick. Since the enemy AI is fairly decent and equally fast off the mark you can quickly get overrun unless you keep up with the faster style of gameplay. Mission objectives range from killing the enemy to destroying the enemy to blowing the enemy up and occasionally avoiding the enemy to do something else and then killing and destroying them by blowing them up. C&C3's narrative may have some nice twists and turns but individual missions generally resolve into different ways of churning the landscape up with high-powered weaponry. Frankly, if you've been at work for eight hours and want to relieve some tension whilst kidding yourself that you are the Patton Reborn, this is probably not too much of a problem.

There is a late-stage 'twist' in the game that would be more shocking if it wasn't spoiled on the back of the box and hadn't been built up in the previous two games as well, but there you go. More frustrating is the fact that the game doesn't so much reach a climax as simply stop, almost in mid-sentence. There are so many plotlines left unresolved at the end of the game that the player is left with a vaguely uneasy feeling in their wallet, and sure enough the news that at least one or two expansion packs and a potential full sequel are on the way is likely to leave a bitter taste in the mouth. However, this is muted by the fact that Command and Conquer 3, for all its lack of subtlety or originality, succeeds in its aim to produce a simple, easy-to-play and fast-paced wargame which eschews a lot of modern gaming developments in favour of just blowing stuff up in a satisfying manner. Given that the game has exceptional production values, good acting, a solid storyline, three well-balanced sides and is of very reasonable length, this is enough to ensure that the player gets his or her entertainment value from the title. The game is also designed to work well on older hardware, meaning that your PC doesn't need to have been engineered in God's own branch of PC World to run it.

Command and Conquer 3: Tiberium Wars (***½) has been out for nearly a year, so I suspect you'll find it discounted in the Christmas sales. It's out now on the PC in the USA and UK, and also on the X-Box 360 in the USA and UK. The first expansion, Kane's Wrath, will be released in the Spring of 2008.
Posted by Adam Whitehead at 22:11

I've spent a LOT of time playing PC games, but not played a lot of games (compared to many). I find something I like and stick to it. So as far as RTS goes I played Age of Empires (2&3) to death and then I moved on to this and played it to death too. I really got into the online 1 on 1 version and became pretty good at it.

Given my limited experience I can't talk about its strengths and weaknesses in the context of what else is out there - but for me it was a great game with plenty of depth and considerable thought put into the balance.

I also played Call of Duty MW2 to death (I saw the review of its precursor). In both cases the single player version occupied probably 0.1% of the time I spent on it (I played both C&C3 & CoD MW2 single player through) - I enjoyed both single player games, but they felt like training for the 'real thing'.

Until these two games I never really played online & was always irritated by reviews that dismissed the SP and spent forever on the MP ... so I appreciate your focus here - but also note that these games can be viewed in two very different ways. Certainly I would feel robbed if I bought CoD MW2 as a single player (too short + other issues) & with C&C3 would share your scoring. As multi-player experiences I would rank them highly and still don't regret the stupidly large hole they put in my spare time :)