I am moving again, so I'll be offline for a while. So here's some reviews to be going on with:

The year is 1848. 122 years earlier a mariner returned to England speaking of fantastical lands he claimed to have discovered in remote corners of the globe. Whilst dismissed as a madman, some took note of what he was saying and the Royal Navy sent ships to investigate. The lands of Lilliput and Blefuscu were conquered, its dimunitive inhabitants enslaved and put to work as servants and engineers, whilst Brobdingnag was bombarded and its giant inhabitants subjected to genocide (out of fear they discover gunpowder and attack England). The flying island of Laputa was captured and subjected to examination, whilst the English army now employs a regiment of sentient horses.

The English are now poised to take Paris and become the dominant power in Europe, but the tide of the war is already turning, with the few surviving Brobdingnagians now in the employ of the French. In England itself, Abraham Bates is championing the rights of the Lilliputian slaves, whilst a young woman named Eleanor Burton dreams of escaping her hideous marriage and being allowed to pursue her dreams of science. 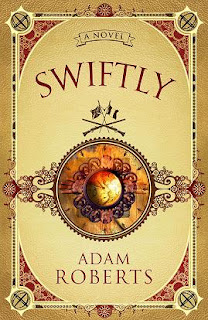 Swiftly is an impressive book. Roberts has clearly carefully read Gulliver's Travels and in this sequel he uses some of the same diction and language of Jonathan Swift, whilst simultaneously pursuing some of the same themes and ideas (there is a lenghthy digression related to faeces, which is highly reminiscent of Swift's own use of dubious imagery in the original). It's certainly a 'killer concept' (although other sequels to the book exist) and the action unfolds in a manner that the reader is probably not expecting at all.

Whilst the book is engaging and certainly contains a lot of humour, there is a fair amount of ambiguity to the tale, particularly the climatic events outside York, with the reader forced to draw their own conclusions to what is going on and how events unfold after the narrative. Those who hate ambiguity in their fiction may find the book not to their taste because of this, whilst those who like stories which require them to use their brains somewhat will find it much more to their liking.

Swiftly (***½) is a book I suspect will divide readers, but I found it intellectually stimulating and a rather different take on the story and world than I was expecting, which is a good thing. Some may find the longeurs in the book distracting and the pacing variable, which means the story doesn't flow as well as it should. Nevertheless, the book is worth reading despite these minor weaknesses. The book will be published in hardcover on 20 March 2008 in the UK by Gollancz. No US publisher is yet listed, but an earlier edition of the story can be found as a novella in a collection of stories published by Night Shade Books in 2004.
Posted by Adam Whitehead at 10:44