Gaunt's Ghosts: First and Only by Dan Abnett

The peaceful, arboreal world of Tanith is commanded to raise a legion of troops to serve in the Imperial Guard, the billions-strong regular army of the Imperium of Man. On the day the Tanith1st is commissioned and depart for deep space, their homeworld is annihilated from orbit. Thus, they are the Tanith First and Last. The Tanith First and Only. 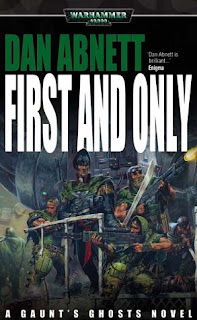 Many years later, the Tanith 1st has a new name: Gaunt's Ghosts. Under the command of Colonel-Commissar Ibram Gaunt, the Ghosts have become a respected unit, skilled in battle and reliable under fire. But Gaunt, a political officer filling a military role, has made some very dangerous enemies in the High Command of the Sabbat Worlds Crusade. The Ghosts are now part of the attempt to liberate the Sabbat Worlds from the forces of Chaos, but Gaunt discovers corruption and heresy may be taking root in the High Command, and he cannot trust anyone but his men in an effort to find a weapon of unimaginable power on the dark world of Menazoid Epsilon before his enemies do the same.

Over the past decade, Dan Abnett's Gaunt's Ghosts series of military SF novels and several related series have sold more than a million copies for the Black Library, a remarkable feat that has made Abnett one of the UK's biggest-selling SF authors with sales on a par with the likes of Peter F. Hamilton, Iain Banks and Alastair Reynolds. Many of these readers have gone on to become fans of the wider Warhammer 40,000 universe of which Abnett's series is part (although self-contained; the Ghosts books can be read with no pre-existing knowledge of the setting), boosting sales of the related computer games and the miniatures line. 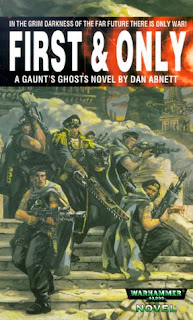 First and Only is where the story began. For a first novel - although Abnett had previously done successful work in comics - this is a remarkably polished effort, with a superbly-executed structure as the main story thunders forward, interspersed with brief flashback interludes to key moments in the history of Gaunt and his unit. As a slice of military SF, this is top-notch stuff, with Abnett providing a reason for the carnage and using deft but not overdone characterisation to differentiate the various officers and grunts from one another and make the stakes in the battles clear. Military SF is a subgenre where it is remarkably easy to fall into cliche quite easily, but Abnett manages to avoid most of these issues and makes the few uses of standard military tropes - such as the unit's doctor who treats soldiers injured in battle willingly enough but refuses to fight himself - almost a welcome nod to a classic trope rather than anything too corny. 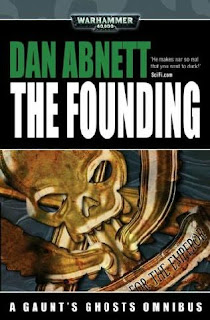 With a firm grasp of character and a superior ability to convey action (you can almost hear the bullets roaring overhead and feel the apprehension of troops stuck in foxholes), Abnett delivers a great, readable SF novel here and earns his comparisons to an SF Bernard Cornwell. First and Only (****) is a fast-paced, SF military thriller. It is not generally available by itself anymore, but is readily available as the first part of the omnibus volume The Founding (together with its two immediate successors, Ghostmaker and Necropolis), available now in the UK and USA. There are currently twelve novels in the Gaunt's Ghosts series with several more planned, along with three spin-off works and several related Warhammer 40,000 game accessories.
Posted by Adam Whitehead at 17:31

Sounds like a series worth checking out. I've never played Warhammer 40000, although I've two nephews who were die hard players.

I just, God help me, started an Imperial Guard army and definitely plan on checking out Abnett's long form work. I do happen to love the new cosmic Marvel stuff (Guardians of the Galaxy, Nova, etc.) so if this is even half as good I'll be happy.

I've actually just started an imperial guard army myself, largely because of the Gaunt's Ghosts series.

I'm pretty new to the Warhammer 40K Universe but after having read every Gaunt novel (and eagerly awaiting the next!) i can tell you it's DEFINITELY a series worth checking out if you're into Sci-Fi literature.

They're remarkably addictive, and you'll love (and hate, where appropriate) the characters introduced throughout the novel.

Definitely give it a shot!

Abnett is a very able author, everything from his fantastically grime future warfare to his Epic comic work.

The Gaunt Series is Amazing.

If you haven't read these books, do yourself a HUGE favor and get crackin'! These are some of the best books I've ever read. I re-read them every so often just to revisit the fantastic characters and action-packed combat scenes.

He doesn't write them as if you need to be a 40k fan, but he doesn't over explain things in an annoying way for those familiar with the world. It's not a bad idea to Google some of the vehicles he writes about so you get a tasty visual, but you really don't need to.

Minor Spoiler....
Don't get too attached to any of the characters as you never know who's the next to die in combat.

I can't say enough good things about this whole series.

Why are you still reading this? Get to the bookstore now!

I recently became interested in these books when I noticed them at a local used bookstore, since then I've come across lots of positive reviews and heard good things from folks I respect and trust, Wert, you may be the clincher...looks like I'm gonna have to read these books. Thanks for yet another helpful review.