Originally published as a series of eight short stories in Astounding Magazine in the late 1940s, Isaac Asimov's Foundation series became best-known as a trilogy of fixup novels, published between 1951 and 1953 by Gnome Press in the USA. Asimov had developed the concept along with infamous SF uber-editor John W. Campbell and was inspired by Gibbon's Rise and Fall of the Roman Empire. The initial stories chronicled the fall of the ancient Galactic Empire and the galaxy's descent into chaos, with the twin 'Foundations' established by psycho-historian Hari Seldon to guide humanity to the rise of a new empire a thousand years later. The trilogy only covered four centuries of this period before Asimov ran out of inspiration for future stories and decided to turn his attentions elsewhere. 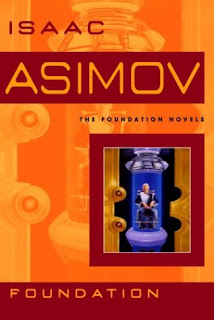 The trilogy went on to become one of SF's most popular and well-known sagas, arguably outstripped only by Frank Herbert's Dune series, and won the one and only 'Best Series' Hugo Award in 1966 (an award that Asimov believed had purely been invented to retroactively honour The Lord of the Rings and was flabbergasted when he won instead). Asimov eventually returned to the series in the 1980s, penning the fourth and fifth books, Foundation's Edge in 1981 and Foundation and Earth in 1986, before writing two sequels, Prelude to Foundation (1989) and Forward the Foundation, the latter finished just before his death in 1992. Asimov also, perhaps ill-advisedly given the resulting continuity issues, combined the Foundation universe with his Robots books to create one enormous future history spanning some 20,000 years.

The Foundation books are noted for being heavy on sociological musings, stern-faced characters discussing matters of import, historical ponderings, awkward romances and occasional, long-distance space battles. Obviously this makes them the ideal source material to be turned into a trilogy of CGI-drenched 3D space opera extravaganzas featuring slow-motion explosions and (probably) cute dogs by the understated and subtle film-maker Roland Emmerich, the director of such arty flicks as Independence Day, Godzilla, The Day After Tomorrow and the recent 2012.

Okay, it could be worse. It could have been Uwe Boll. In every other respect, this is the most inappropriate matching-up of director and source material I have ever come across. This is a disaster in the making, and it only remains to be seen just how bad the end result is. Maybe Emmerich will surprise us with a film that is halfway-watchable, but I seriously doubt it. What next? Tony Scott's Book of the New Sun? Michael Bay's The Stars My Destination?
Posted by Adam Whitehead at 14:26

Well, in a way, the inappropriateness is a saving grace. The books are unfilmable - at least, the original trilogy is. Eight linked short stories with few or no shared characters, taking place over centuries, large portions of which are entirely composed of retrospective explanations for things that have happened, or else of long dialogues explaining what is going to happen? Short stories about science fiction socioeconomics?

So, in a way, the selection of Emmerich at least signals decisively that they're going to go with entirely unrelated films, high on explosions, that borrow nothing from the books but a few names and the rights to a famous title. Hooray - that means they're not going to try to actually film the stories! If they chose a serious director, we might have thought that they were going to try to make good films true to originals - which in this case would have been impossible.

Since the actual stories will never be filmed properly, I don't really mind them being filmed improperly - better than trying to do a good job and failing horribly.


While I'm here, a question: how do you get book covers for your blog, and how legal is it? I've been trying to work out how to do it, but so far I've just seen people saying that both the publisher and the digitiser are completely free to sue you, but that they probably won't bother, and that you'd probably be able to plead free use anyway, at least regarding the publisher (and apparently some digitisers have waived their rights, I think?). Call me a coward, but I prefer to walk on the safe side... any advice?

People probably thought Paul Verhoeven was an insane choice for Heinlein's Starship Troopers... and he created a film that's greatly superior to the book. Maybe Emmerich will do the same with Asimov's lumpen epic.

I suppose you're right. At least it's not Uwe Boll. Still, that it could have been worse is hardly a recommendation. Damn, damn, damn.

Ian Sales is quite right, but Verhoeven had success because Starship Troopers was such an awesome parody of the original.

I don't think you can do something like this with the Foundation Trilogy.

I cannot imagine this will end in something else but major bullcrap.

Book covers are covered by fair use, as are album covers. Posting a ten-page excerpt from the book or samples of music tracks (this is what led Blogger to delete so many music blogs recently) is very dubious, but covers? Shouldn't be an issue at all.

I agree that Verhoeven's STARSHIP TROOPERS is very good, but it was a mickey-take of the book and the right-wing mindset the book itself was also addressing. Most people I know who love the book (I've never gotten round to reading it) hate the film with an unholy passion, despite the fact that Verhoeven was clearly not going for a faithful adaptation from the off.

That's weird, I love the Starship Troopers book and love the film, I also quite liked the Roughnecks TV series. Of course the 2 sequel films are some of the most evil pieces if dross ever committed to celluloid.

As to Foundation, yup it's a bi mistake for Emmerich to be on board, but stranger things have worked.

Adam, I don't think the book was "addressing" a right wing mindset as such. It simply posited a political system which had a great deal in common with the right. But it's certainly true that fans of the book hate the film.

I had a similar reaction when i once read that Peter Jacksson would direct Lord of the Rings. Just saying.