Supplying the vast armies of the Imperium with their weapons of war are the hive worlds, industrialised planets consisting of huge city-states called hives which churn out the hundreds of thousands of vehicles, millions of weapons and billions of munitions required for the Imperium to wage war on its foes. The individual hives on any one world are very competitive with one another, sometimes even to the point of open conflict. 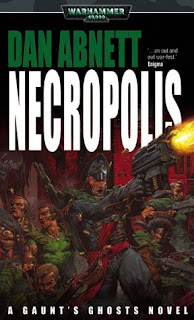 On Verghast, the hive-states of Vervunhive and Ferrazoica, vital supply posts for the Sabbat Worlds Liberation Crusade forces, have long been bitter rivals, fighting a brief but bloody conflict called the Trade War ninety years earlier before settling down into an uneasy peace. When the Zoicans launch a surprise assault on Vervunhive, destroying its offensive army in the field and besieging the city, the hive's proud leaders are forced to call for aid from the Crusade fleet. As elements of the Imperial Guard arrive to reinforce the city, it becomes clear that this is more than just a small-scale planetary feud, and the Siege of Vervunhive will become one of the greatest and most legendary battles of the entire Crusade, especially for the Tanith First-and-Only and their commander, Gaunt.

Necropolis is the third novel in the Gaunt's Ghost sequence and, according to Abnett's introduction to the omnibus edition, is where he 'got it' in terms of what he could do with the Warhammer 40,000 universe and his characters. He's not kidding. The book opens in a rather unusual manner, with the first 50 pages (almost a full sixth of the book) taking place in Vervunhive as the war begins. We meet numerous characters, from city administrators to nobles to industry-workers to gang members, and see how their lives are thrown into tumult by the attack, and how the outnumbered defenders manage to hold off the enemy long enough for a few Imperial Guard regiments to reach them. This gives us a battery of different POV characters, including children, women and civilians (people not well-catered for by the first two books), who give us a very different viewpoint on the setting and world to that of the Guard or Space Marines who are the normal focus for WH40K fiction.

Needless to say, things kick off big time and Abnett unleashes what can only be called the closest science fiction has ever come to its own version of the Battle of Stalingrad. Vast armoured engagements and ferocious artillery bombardments precede a desperate battle for the city and its millions of inhabitants, with Gaunt and his Ghosts, but also numerous other, new characters, in the thick of the action. 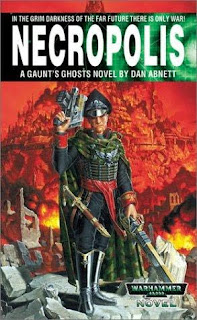 Necropolis is, hands down, one of the best purely military SF novels I've ever read. Between the moments of carnage Abnett also delivers some solid character development for the likes of Gaunt, Rawne, Milo, Bragg and erstwhile antagonists like Gilbear and the other Bluebloods. The battles are violent and vivid, and those who have studied Stalingrad will find some interesting points of comparison in the desperate battles between men armed with just grenades and mines and heavily-armoured main battle tanks in industrial wastelands, tightly-packed streets and bombed-out commercial buildings. Abnett also makes some interesting points here about the sheer wastefulness of war, particularly in the maudlin ending, which is unusual in a military SF novel. The book manages to be based around an epic and violent battle without glorifying it, which is an impressive balancing act to achieve.

Necropolis (****½) is a thunderously readable, page-turning and smart military SF novel, available now in the UK and USA as part of the omnibus volume, The Founding.
Posted by Adam Whitehead at 16:52