2006. Chameleonic assassin Lorne Malvo passes through the town of Bemidji, Minnesota. A chance encounter with a put-upon, stressed-out salesman named Lester Nygaard unleashes a chain of chaotic events, culminating in multiple murders. The local police force is eager to sweep the chaos under the rug, but Deputy Molly Solverson realises that there is more going on than first appears. When a Duluth police officer, Gus Grimly, has his own close run-in with Malvo, the two officers join forces to bring the assassin to justice. 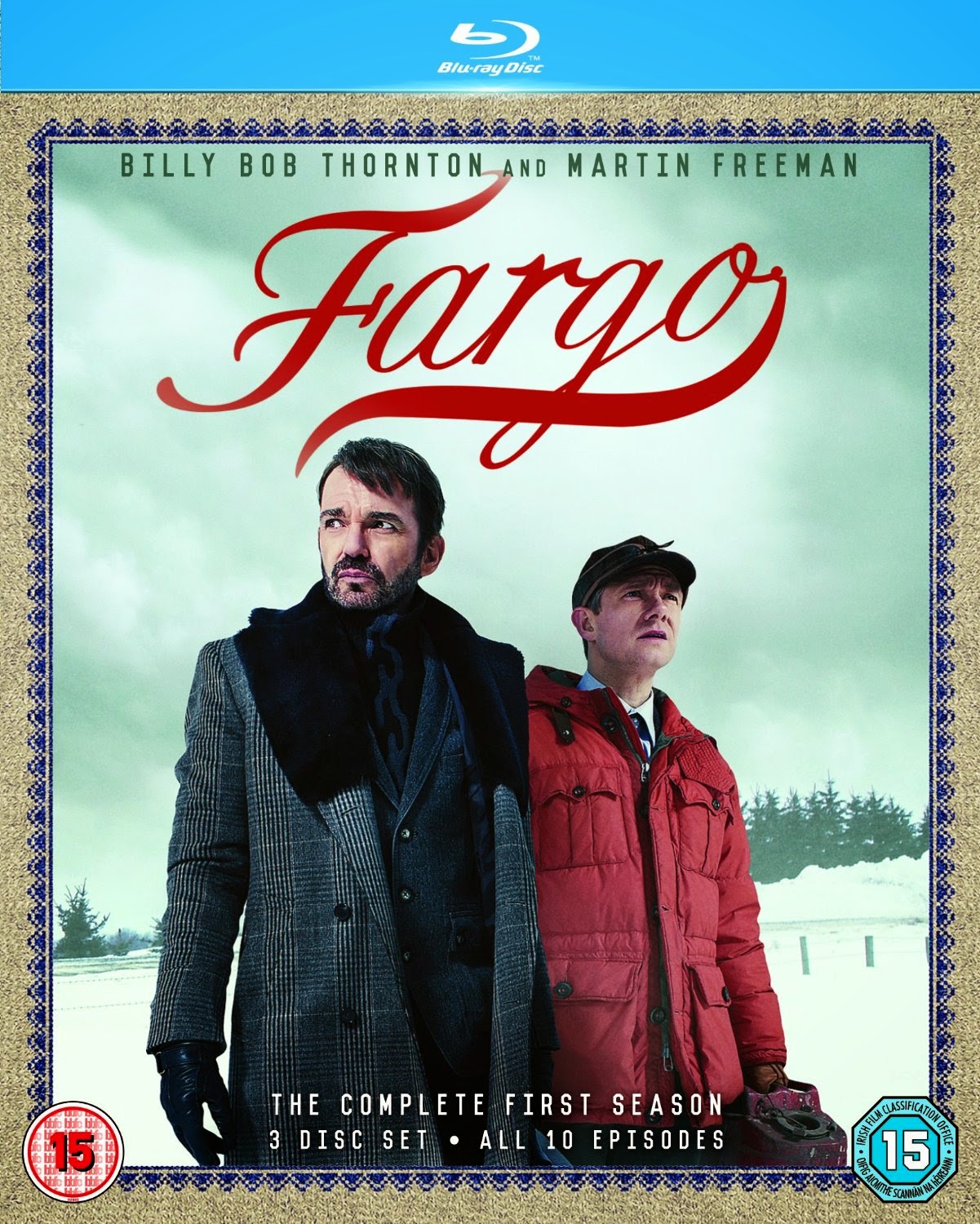 At first glance, a TV series based on the 1996 movie Fargo seems like a crazy idea. The film, directed by the Coen Brothers, is idiosyncratic, unique and offbeat. Turning it into a weekly TV series sounds like a lunatic idea, which is why the Coen Brothers initially refused to have anything to do with it. After seeing the first episode, they changed their mind and signed on as producers. It’s easy to see why. The first season of Fargo, the TV series, may be the most genius single season of television produced this decade.


The connections between the TV series and the movie are slim. The TV series uses some ideas and tropes from the film and echoes a few of its ideas, but in terms of actual connective tissue the only element used is a briefcase of money left in the snow in the film, which a character stumbles over in the TV show. If you’ve never seen the film it’s not important whatsoever. It’s also a relief to learn that Fargo, like True Detective, is an anthology series. Each season will take place in a different time period with a different cast (Season 2 will take place in 1979 in South Dakota, for example). The series is set in the same “universe”, so if you watch the whole thing you’ll notice all the little connecting details, but broadly speaking it’s not necessary. You can enjoy this as a single, ten-episode mini-series with no major dangling plot threads.


One of the benefits of these anthology series is that they represent a short-term commitment for major film actors who might balk at a longer stint on a TV show. The result is that Fargo’s cast is peppered with famous faces from film and TV: Billy Bob Thornton as Lorne and Martin Freeman as Lester are the main draws and most famous faces, but Colin Hanks also appears in the role of Gus and Breaking Bad’s Bob Odenkirk slotted in his appearance as semi-incompetent police chief Oswalt before filming Better Call Saul. Keith Carradine (Wild Bill Hickock from Deadwood and too many film appearances from the 1970s onwards to count) has a small but crucial role as Lou Solverson (a younger Lou will be a key character in the second season). The show also has time to turn up trumps with a new talent: Allison Tolman gets her big break as Molly and is absolutely brilliant, holding her own against the other actors and turning in a barnstorming mixture of resolve, frustration and not wanting to rock the boat but really going for it if she believes it’s the right thing.

Thornton gets one of the best roles of his career with Lorne, an assassin who likes to keep his targets off-balance with existential and literal-minded musings, an absolute absence of any kind of fear and a thousand-yard stare that has cops backing away from him at traffic stops. At different times he has to pose as other people, or go undercover for months to win over a target’s trust, and Thornton’s ability to spin his performance on a dime is astonishing. Freeman is also exceptional; inverting his usual performance as quiet nice guys to play a hard-pressed working man who initially wins the viewer’s sympathy, but by the end of the season has turned into a loathsome, murderous little weasel. Lester’s descent feels like watching all of Breaking Bad compressed into ten episodes, but never feels rushed or implausible. 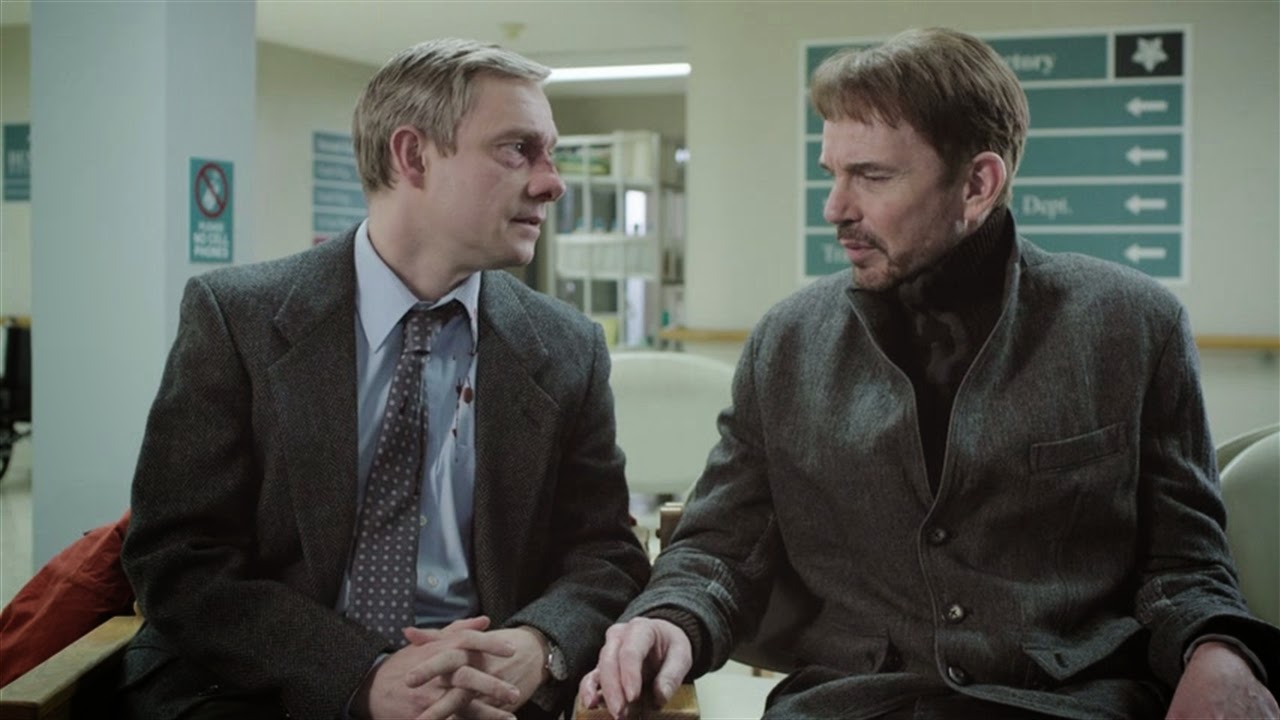 What makes the show work is the way it channels the oddness of the Coen Brothers without feeling like a parody of it. Dialogue is written in the same slightly off-kilter way and there’s the same, understated and intriguing tone to the direction, occasionally punctuated by memorable set-pieces: Lorne’s one-man assault on a mafia-filled business is darkly hilarious, amusingly cost-conscious (they can’t afford the full shoot-out so we only hear it as the camera pans up the outside of a building, interrupted only by brief views of the carnage through windows) and extremely audacious. Not many directors or writers could take on the Coen Brothers and match them, especially over ten hours, but the team here manage it. It’s something that continues throughout the series, which is also not exactly reluctant to set up characters for episodes and hours on end and then kill them in off-handed, arbitrary ways that even Joss Whedon might balk at. This, coupled with the show’s short run time, adds a real sense of danger to proceedings which maintains the tension.

There are a few minor flaws. Some story points turn on the fact that the local police force and its new chief (counting the days to retirement) really don’t want to investigate the murders in too much detail, jumping on the most convenient story available to declare it closed. Whilst this closed-minded bureaucratic viewpoint is believable, it does get a little frustrating that supposed servants of the law seem to be extremely uninterested in finding out the truth if it is inconvenient to them. At the same time, it makes us empathise strongly with Molly as she also becomes incredulous at their intransigence, so it works on that level.

The first season of Fargo (*****) is, quite simply, brilliant. The writing is top-notch, the performances are flawless and the series can turn from being laugh-out-loud hilarious to gut-wrenchingly terrifying in the space of seconds. It’s offbeat, different and ambitious. You can get it now in the UK (DVD, Blu-Ray) and USA (DVD, Blu-Ray).
Posted by Adam Whitehead at 20:22

Theres a huge flaw in the show. They completely drop the blackmailing story line without any conclusion. I dont want to give away any spoilers but you know the one Im talking about, and a huge gun battle in the middle of the show seems pointless because of that.