Hydra has been dealt a serious blow and the remnants of SHIELD are able to regroup, but they soon find themselves caught up in a new conflict. They have discovered a race of humans with superpowers - Inhumans - and a second branch of SHIELD believe they could be a threat against humanity. Coulson and his team have to navigate treacherous waters between what is right and preventing a greater threat from emerging, made all the more complicated when it is revealed that Skye is an Inhuman herself... 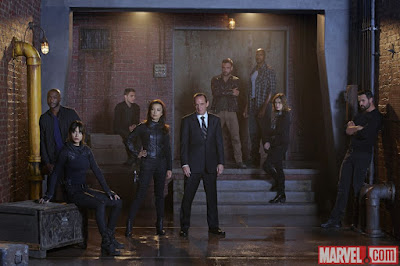 After its disappointing first season, Agents of SHIELD has become a surprisingly watchable slice of hokum. Not operating on the same quality level as the Marvel Netflix shows, it nevertheless delivers frequently cheesy-but-fun entertainment on a weekly basis.

In the second half of the second season, the threat of Hydra takes a back seat (although Ward still manages to occasionally show up and glower impotently for a few minutes each week) as Coulson tries to sort out the dual problems of the Inhumans and another branch of SHIELD led by Admiral Adama from the battlestar Galactica Robert Gonzales from an aircraft carrier. Skye/Daisy has her loyalties tested in all directions and there is a lot of angst floating around.

It makes for a fun, soapy storyline although one that irritates as it has no real depth to it. Story twists are mostly predictable and the betrayals and plot reversals are frustrating because they are so clearly signposted, sometimes episodes in advance. It's only in the last couple of episodes as Skye has to choose her loyalties and Kyle MacLachlan gets more to do rather than just look enraged by constipation that the show steps up its game. In fact, it genuinely surprises a few times in the finale mainly by having our heroes lose, setting the scene for the (fortunately) superior third season.

The second half of the second season of Agents of SHIELD (***½) is certainly worth a look if you have the time, although given how many far superior shows are around at the moment fitting it in can be a struggle. But it's good to see the show continuing to improve away from the weakness of its opening episodes.
Posted by Adam Whitehead at 09:18