The Man in the High Castle: Season 1

1962. It has been seventeen years since the United States lost the Second World War. The western third of the country is occupied by the Japanese Empire, whilst the German Reich controls most of the rest. A narrow buffer zone in the Rocky Mountains lies between them. The spreading of a series of unusual film reels brings together a Nazi secret agent and a young woman whose sister was murdered by the Japanese secret police. Their actions will determine the fate of the fragile peace between the two superpowers, and possibly the future of their world. 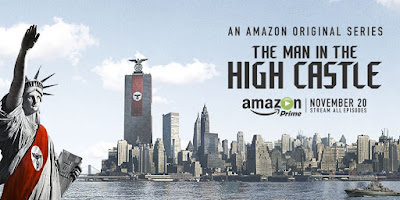 The Man in the High Castle remains Philip K. Dick's best-known novel, which is quite an achievement given the famous films based on his novels (including Blade Runner, Total Recall, Minority Report, A Scanner Darkly and The Adjustment Bureau). Released in 1962, it paints the picture of a world where the Axis powers won the Second World War. Rather than overtly painting the terror of such a world, Dick effectively shows it to be horrific in its mundanity: people accepting the enslavement of Africa and the annihilation of the Jews without comment.

The killer premise has always been at the core of the novel's appeal, as has its - relatively, for Dick - straightforwardness and less of a reliance on dwelling on mental states or consciousness. It's still a mindbending book, but also an approachable one.

At first, it appears that Amazon has eschewed the subtlety of the novel in favour of a much more obvious adaptation: New York draped in swastikas, San Francisco decked out in Japanese rising sun. The SS and the Japanese Secret Police brutally torture suspects for information and Americans are forced to hand over their children to the Hitler Youth for indoctrination. It's horrific, but also perhaps obvious. Fortunately, the series quickly abandons a superficial examination of the idea for a more complex and nuanced look at nationalism, patriotism, ideology, the ideas of resistance and the notion of hope.

After a solid-but-slow opening few episodes focusing on antics in Canon City (where the premise is not very well explored), the series improves immensely as it delves deeper into what's going on in the Pacific States and the Reich. Alexa Davalos, Luke Kleintank and Rupert Evans turn in reasonable performances as our three main characters, Juliana, Joe and Frank, but they are given variable material to work with. Joe Blake in  particular is a hard character to nail down, riven as he is by conflicted loyalties but we are not necessarily well-sold on why those loyalties are so conflicted.

More impressive as the apparent villains: Nobusuke Tagomi (Cary-Hiroyuki Tagawa), the Japanese trade minister in San Francisco who is secretly plotting with a German traitor to maintain peace between the two superpowers; Japanese police Inspector Kido (Joel de la Fuente), who is hunting for traitors; and John Smith (Rufus Sewell), an SS officer trying to recover the film reels.
The actors do a good job with their characters, who for the most part are extraordinarily well-written. Particularly outstanding are Fuente and Sewell, whose characters are presented as the antagonists or villains of the series but who are gradually shaded to reveal much more interesting depths as the series progresses whilst also never redeeming or compromising their darker sides. Tagawa's performance as Tagomi is also absolutely outstanding, as he seeks to preserve harmony and peace even as the storm clouds gather. This is definitely a series where the villains are far more interesting than the supposed heroes.

The result is a highly intriguing, mostly-successful series which sifts through Dick's extremely short novel to find ideas and characters to fuel a long-running, multiple-season story. A second season has already been commissioned, and given that The Man in the High Castle is already Amazon's most successful original series, more will likely follow. At the moment this is surprisingly welcome. The novel is very short but Spotnitz has brilliantly mined it to tell a compelling story and set up future mysteries to be explored further. Dick himself attempted to write a sequel only to (reluctantly) abandon it due to the horrors he was unearthing during his research, so he was certainly not opposed to exploring the world and characters further. Whether Spotnitz and his team can do as good a job remains to be seen.

The first season of The Man in the High Castle (****) has immense production values, great performances and excellent writing. It's a taut thriller, an examination of fascism and patriotism and a quietly effective exploration of a horrifying idea. In its last two episodes, it even pulls the rug out from under the viewer's feet in the manner that the novel and Dick's best stories do so well, hinting at a much more complex and interesting story to come. However, there is some wheel-spinning at times and the side-trip to Canon City goes on for a good episode or so too long. The season is available now on Amazon Prime in the UK and USA.
Posted by Adam Whitehead at 18:10