Russia, 1805. The armies of Russia, allied to the Austrians, have been defeated by the Emperor Napoleon at Austerlitz. Rather than pursue a hopeless cause, the Russians have made peace with the French and an uneasy calm descends across eastern Europe. In St. Petersburg and Moscow, the fortunes of three families rise and fall: the Bezukhovs, the Rostovs and the Bolkonskys. Pierre Bezukhov, an illegitimate son and an intelligent, gentle man is surprised when he inherits vast estates and becomes a target for scheming and intrigue. Natasha Rostova orchestrates the love lives of her friends and family, but finds herself unable to find love herself. And Prince Andrei Bolkonsky is unable to find happiness with his wife so throws himself into life in the army. Seven years later, Napoleon assembles one of the greatest armies in history and crosses the Russian border, changing the fortunes of all. 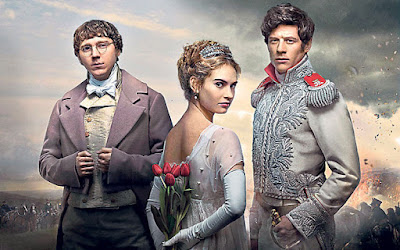 War and Peace is one of the greatest novels of all time, a rich and stunning evocation not just of its title themes but also of love, family, duty, economics, politics and patriotism. On publication its vast-ranging story and topics confounded and dumbfounded critics. In the 20th and 21st centuries, the novel's startling length and breadth has likewise stymied countless scriptwriters and would-be adaptations. Although the book has been filmed for the cinema and the television at least eight times, compromises have always had to have been made for expense (the Battle of Borodino, the bloodiest battle of the Napoleonic Wars, plays an important, central and budget-annihilating role), length (at 590,000 words the novel significantly outlengths even The Lord of the Rings) and, well, boredom (the book features massive and digressive essays by Tolstoy about numerous facets of Russian society).

The BBC's latest tilt at Tolstoy's windmill is lavish, with massive, CG-enhanced battle scenes and huge party and ballroom scenes. Crucially, the series was able to film scenes in Russia, Latvia and Lithuania where some of the real events took place to add some authenticity. However, this is compromised by brevity: the BBC adaptation clocks in at just six episodes and approximately six-and-a-half hours of screen time. Excellent for those whose patience is in short supply, but dubious for those hoping for a faithful recreation of the book.

Against the odds, the result is a highly watchable drama series. Andrew Davies is one of the BBC's oldest, most reliable and steadiest hands at adapting massive 19th Century novels for the screen and he came to War and Peace fresh, not having previously read it. This may cause howls of outrage from some quarters, but Davies' lack of previous experience with the book works in his favour in this case, as it allows more ruthless but practical paring back of the book's colossal cast (the novel has over 500 named characters) and subplots to focus on the book's core.

At its heart, War and Peace is not really about the war or the peace, but about family. The three central figures of Pierre (Paul Dano), Natasha (Lily James) and Andrei (James Norton) have their own struggles as they try to satisfy their families and their hearts, making compromises or decisions for the greater good that they later come to regret. One of the reasons the book has endured is that it is possible for anyone from any time or place to empathise with this central trio's life problems, such as feeling trapped by society into a role or job for which they are ill-suited, or trying to help their family survive a period of financial hardship. Both Davies' lean and economical script and the excellent performances from the central trio keep these elements intact on the screen. Dano, in particular, gets across Pierre's frustration and befuddlement across without it dipping into annoyance. Careers have been made on getting Pierre right (a role played by a very young Anthony Hopkins in the 1970s BBC mini-series) and Dano pulls it off well.

Where the show falters is its handling of the over-arcing political storyline. The novel features an early meeting between the Tsar and the Emperor which sets the tone for how the French and Russians relate to each other subsequently (later mirrored in a scene where Pierre - reluctantly - plays host for a French officer during the occupation of Moscow). However, the TV series dispenses with this scene, gives the Tsar only a couple of very brief scenes but then has Napoleon showing up to mutter pithy statements every now and then. It feels like either the entire high political/military story should have been ejected (save perhaps Boris Drubetskoy coming face-to-face with Napoleon briefly) or the TV series should have embraced the book conceit of featuring the historical figures more prominently. As it stands, Napoleon's invasion of Russia comes out of nowhere for the less historically astute viewer. Another slightly awkward element is the substitution of English for Russian (French stays in French), which becomes a bit bizarre when Russian songs are then sung in Russian.

More laudably, as it's an element that is easy to eject from the story, Davies tries to get to grips with Tolstoy's musings on serfdom and the betterment of the people. Tolstoy himself spent a lot of time trying to improve the lot of the serfs and peasants on his estate and Pierre can be seen as something of an author-insertion character in this sense. Although it's not a major storyline, it does provide two of the best moments of the series: Pierre stacking a couple of bundles of wood and then sitting down to enjoy the sun, apparently believing he is now a hard-working outdoorsman; and Pierre as a prisoner bonding with a poor peasant-soldier and his dog on the devastating retreat from Moscow.

Ultimately, the BBC adaptation of War and Peace (****½) cannot hope to match the power and scope of the novel. But it does provide six and a half hours of watchable drama, well-played and with the core themes and storylines of the book kept intact. It is available in the UK (DVD, Blu-Ray) and USA (DVD, Blu-Ray).
Posted by Adam Whitehead at 15:03