The comic book series Saga is to resume in January 2022. The series, written by Brian Vaughn and Fiona Staples, went on hiatus in 2018. The hiatus was originally meant to be for a year or so, but was extended by the COVID pandemic and the creators getting involved in other projects. However, Vaughn confirmed they were hard at work back on the series last year. 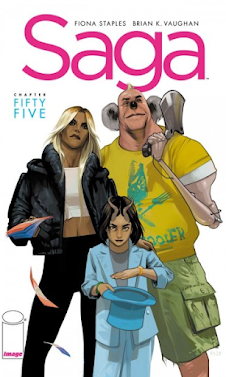 Saga began in 2012 and rapidly garnered both critical and commercial acclaim, becoming one of the biggest-selling comic book series of the decade in both monthly release and later collections (totalling more than 7 million sales). The series went on hiatus after issue #54, the planned exact halfway point of the entire story, on an absolutely massive cliffhanger.
The series begins with two soldiers from different sides in an interstellar war, Marko and Alana, meeting and falling in love. They have a child, Hazel, who might be a symbol of hope and peace, and for that reason people on both sides want her and her parents dead. Various bounty hunters are assigned to the task, which is made more complicated by both Marko and Alana's formidable skills and by the battery of weird and wonderful allies they build up whilst on the run.
Saga #55 will be a double-length, 44-page special and will hit shelves on 26 January.
Posted by Adam Whitehead at 16:05

Time for me to finally get into this then. Picked up the first three issues ages ago but never got around to them. Thanks for the heads up!