In a surprising move, FX has decided not to proceed with a second season of Y: The Last Man, its adaptation of Brian K. Vaughan's much-lauded comic book series. The decision is especially startling as it was taken when only seven of the ten episodes had aired in the United States, and six worldwide. Typically such decisions would only be taken or announced once the whole season was available, so as not to put people off watching the rest of the season. 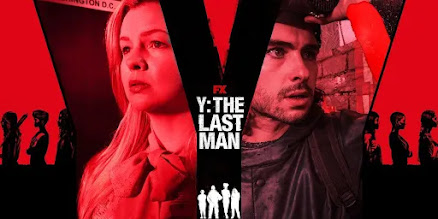 Vaughan's Y: The Last Man comic book series, co-created and drawn by Pia Guerra, ran from 2002 to 2008 and was a marked early success in the post-apocalyptic comic genre (Robert Kirkman's The Walking Dead debuted a year later). The comic posits a world where every single mammal with a Y chromosome (even sperm) has instantly dropped dead or become unviable, apart from two: the titular Yorick Brown and his pet monkey, Ampersand. The two find themselves at the mercy of the surviving female population, some of whom want to clone them, others who want to use their genetic material to create a cure, and a nihilistic cult which wants to kill him and end any hope of survival for the human race. The comic was applauded for its unpredictable story turns.
There were several attempts to bring the show to the screen before FX landed the rights in 2015. Development was repeatedly stymied by changes in personnel and disputes between the studio and various showrunners on the tone of the show. A pilot was filmed in 2018, which created a mixed reaction at the network. Eliza Clark finally landed the showrunner gig in 2019 and was able to steer the first season into production. However, the production period for the show then ran into problems and delays resulting from the COVID pandemic before finally concluding in July 2021, three years after shooting on the pilot began. The show began airing last month after a further change, a last-minute move from FX itself to American streaming service Hulu.
The show has received fairly mixed reviews, with a common consensus being that the opening episodes are too grim and humourless before the show is allowed to breathe in later episodes. Other criticisms include the writing for protagonist Yorick Brown, which makes him very unlikeable for large chunks of the season, and a scattergun narrative that careens between three storylines (Yorick on the move, his sister who has fallen in with a cult and his mother's precarious position as the President of the United States) with some severe pacing issues. Some critics also noted that the show's grimdark tone is not necessarily the best fit for the world in general right now, and that also some of the show's thunder and power has been stolen by several other post-apocalyptic shows, including The Walking Dead and its two spin-offs, as well as the recent mini-series version of The Stand. However, critical appreciation for the series has grown over the course of the season, with special praise reserved for Ashley Romans' powerful performance as Agent 355.
The actual reasons for the cancellation are unclear - FX has not commented so far - but it might be that the show's initial release has simply not delivered the required viewing figures on Hulu and, worldwide, Disney+. The delays have meant that the show is very expensive and it needed to be a massive hit right out of the gate.
For my part, the show started sluggishly but has picked up momentum over the course of the season and the story has become more interesting. Certainly the source material, if adapted well, has the potential to take the show on a wild ride which should avoid comparisons with other post-apocalyptic series.
Showrunner Eliza Clark has noted that they have the opportunity to take the project elsewhere, and it may be possible to save the show on another network or streaming service. The show has picked up a few high-profile fans, with Breaking Bad and Better Call Saul star Bob Odenkirk revealing he's a fan on Twitter.
UPDATE: The Hollywood Reporter has the inside scoop on why the show was cancelled. There was a hard deadline of 15 October when FX had to decide to spend $3 million on renewing the cast contracts or not, and they decided they would not do that without a renewal decision. Since they did not have enough viewing figure data to make the call, they decided not to renew. It also sounds like FX may have become somewhat disillusioned with the project given its six-year gestation period and frequent changes of showrunner and actors.
However, FX are reportedly keen to help the show find a new home and it sounds like discussions are underway for Y: The Last Man to move to potentially HBO Max, which might be a better fit for it. This is unusual given that FX is part of the Disney family and the show could perhaps move somewhere else within its empire, but a sign of good faith that FX has in the production team. Given that the cast contracts have now been terminated and the cast could start getting other offers soon, such a transition would have to happen pretty quickly.
Posted by Adam Whitehead at 22:34

I can't recall another show working as hard to make its main protagonists unlikeable and/or foolish. It isn't just Yorick. Even agent 355 commits a pretty horrible act, killing innocent "friendlies" for little reason. Maybe that is explained later, but I found myself rooting against both of the people involved in that plotline. Maybe that would be explained later, but why waste half the season just making me dislike their entire plotline?

Hero and her friend were very interesting characters though.