THE LAST DANGEROUS VISIONS goes out to publishers

J. Michael Straczynski has submitted the manuscript for his completed version of the late Harlan Ellison's anthology, The Last Dangerous Visions, to a literary agency. The book is now being shopped to various publishers. 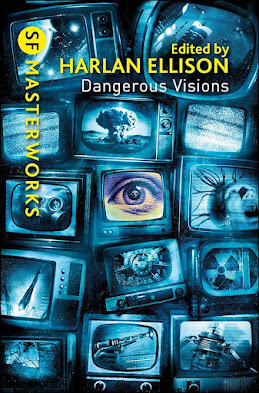 The follow-up to the award-winning Dangerous Visions (1969) and Again, Dangerous Visions (1972), the book has been in the planning stages since 1973, with Ellison regularly announcing target dates for completion and publication. At one point the book was said to number some 150 stories, requiring multiple volumes to come out. Ellison continued to regularly claim he was working on the book into the 1990s, and sometimes later still.
Following Ellison's death in June 2018, his friend and occasional collaborator literary executor J. Michael Straczynski began working to bring the book to publication. He pruned a lot of stories that had not held up, or whose return had been requested by their authors or their estates, and decided to add several new stories by contemporary authors to give the anthology a modern feel. The final word count of the anthology is a surprisingly modest 112,000.
The Last Dangerous Visions is being handled by the Janklow & Nesbit Agency, with rights to the earlier Dangerous Visions and Again, Dangerous Visions included to complete a uniform edition. Contributors to the book include Edward Bryant, Stephen Robinette, Max Brooks, DM Rowles, Dan Simmons, Cecil Castelluci, Cory Doctorow, Stephen Deman, Patton Oswalt, Jonathan Fast, Howard Fast, Robert Sheckley, Adrian Tchaikovsky and James S.A. Corey.
In a post on his Facebook page, Straczynski also notes that other, very high-profile modern SFF authors had been offered to take part but had chosen not to do so.
Posted by Adam Whitehead at 23:47

What a mess. Rather than just put out the stories, value judgements get made, stories will now never see the light of day because the new editor prune them out and the authors and their estates will probably be dead and buried, or clueless. Meaning that much fiction would be lost forever. And if anyone thinks that SF is about predicting the future, they need to do a whole lot of reading. That's a very small part of the genre and the one that least holds up and dates the fastest. It's, for me at least, a speculative play of ideas which might predict some element of the future.

Anyway, glad that Sheckley story is finally getting an airing.

Because of the amount of time that has passed will the first two books be reissued?

Yes. The publishing rights to the first two books are included in the deal.