Five years after the end of the Clone Wars and the collapse of the Galactic Republic, with the Empire rising to replace it, fugitive Padawan Cal Kestis is flushed out of hiding on the planet Bracca. Rescued by former Jedi Knight Cere Junda and starship captain Greez Dritus, Kestis discovers that the Empire and its Inquisitors are hunting for a Jedi holocron filled with the location of Force-potential children scattered across the galaxy. Kestis revolves to find the information first before the Empire can wipe out a potential new generation of Jedi. 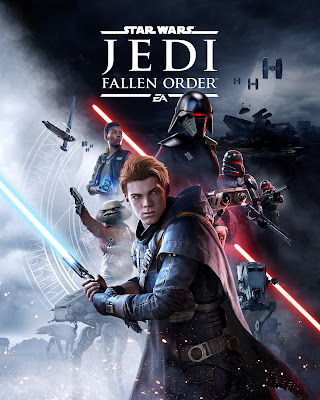 There's a saying that if you're going to steal, steal from the best. Respawn Entertainment took that to heart when they were given the keys to make a new Star Wars action game. As well as the movies and expanded setting, they tapped games like Dark Souls, Metroid, Arkham Asylum and Castlevania for inspiration. The shadow of the Dark Forces (aka Jedi Knight) series, with its definitive first and third-person Star Wars action and unbeaten lightsabre combat, also looms large over Fallen Order.
Against such comparisons Fallen Order buckles but does not fail, and sometimes impresses. The game sees the player take control of Cal Kestis, former Jedi Padawan who has gone into hiding from the Empire. Flushed out by the Inquisitors, he is rescued by former Jedi loyalists and learns that he has to follow a trail of breadcrumbs across the galaxy in search of a Jedi holocron containing vital data. The Empire is also, of course, after that data and a race against time develops. The trail takes Kestis to several different planets, some new to the franchise, some well-known (thankfully, Tatooine is notable by its absence after its recent, massive overexposure). On these plants Kestis finds roadblocks to progress, but also learns new skills and gains new equipment which unlocks new routes on other planets. Hence he - slightly comically - is stymied by a slightly too high cave opening and has to travel five thousand light-years to get some special climbing gloves and then come back to climb to the opening. 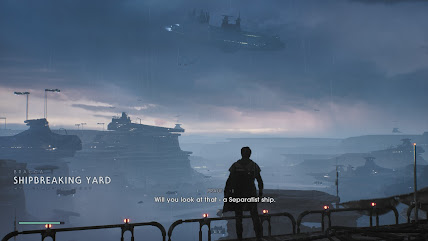 It's daft but it works. As you to and fro across the galaxy, the story evolves and each world's levels evolve, giving you more new areas to explore, new enemies to fight and new skills to learn. It's fun, but drawbacks soon start appearing.
The first is how the game treats enemies. Fighting stormtroopers is fun and Fallen Order cleverly repurposes some of the types we've seen before: Return of the Jedi scout bike troopers are now reclassed as advance recon troops with special melee combat training; whilst flame and rocket troopers are much more lethal with those weapons than previously. Stormtroopers are less disposable goons here and have to be treated with some respect in how you fight them. Inquisitors, who are trained to fight Jedi one-on-one, are even more formidable, and their officers (and the main villains) are devastatingly effective bosses whom you have to learn Dark Souls-style attack patterns and blocking formations to defeat effectively. This is all excellent. Less excellent is the fact that you spend maybe around 25% of the time fighting any of this type of enemy. The rest of the time you are fighting deadly birds, angry plants, giant slugs, gianter insects and a quite bewilderingly huge variety of spiders. Why on Earth they spent so much time making the lightsabre combat so solid only to have you spend more than half the game fighting off wildlife with your laser sword is mystifying. 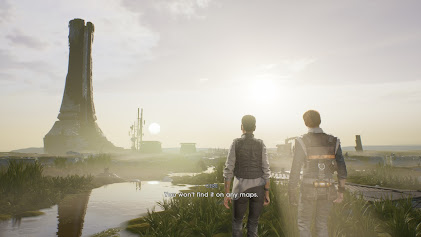 The game's trump card is its amazing level design, with levels that fold back on themselves quite ingeniously, fantastic use of vertical space and are also at least vaguely believable as actual spaces someone would live in or use. Less amazing is the game's tendency to overuse certain tricks like slippery slides. You will spend a quite astonishing amount of time in this game judging how to fall down a slide and making sure you hit turns correctly so you don't shoot off the side to an insta-death. These slides are absolutely everywhere, regardless of it it makes any sense or not. There's also a truly staggering amount of wall-running and double-jump puzzles (some inherited from the same developers' Titanfall series), some intricate and fun, others tiresomely frustrating.
For a game so rooted in precision jumping and controls, it also does have a fair bit of jankiness and iffy collision detection. There's a lot of clipping, allowing you to sometimes kill enemies through solid walls, and during boss fights it's not uncommon to see an enemy weapon go right through you without causing damage one second, and in the next hit thin air three feet away and cripple you. The jank never gets too bad, but it does feel like this is one area that needs to be worked on for the in-development sequel. 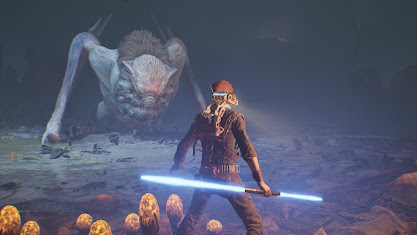 Still, negating the levels, fending off enemies and successfully deducing and executing the solution to an environmental puzzle never gets too old. The story is basic, but told with aplomb and some great voice acting, and the characters are great, especially Dathomir witch frenemy Merrin, who really should be the star (or co-star) of the next game, along with her ridiculously dry sense of humour. Kestis himself is a bit of a blank slate, though the utterly predictable mid-game struggles with the Dark Side do at least liven him up a bit.
Graphically, the game looks phenomenal, although as a PlayStation 4/Xbox One game it does have that slight problem of needing to slow down progress to load the next environment in the background, leading to rather a lot of crawlingly agonisingly slowly through narrow passageways. The built-in 3D map is excellent (if occasionally confusing, especially regarding vertical travel) and the controls are mostly responsive and fluid (if occasionally requiring a bit too much ambidexterity on the keyboard).
Star Wars Jedi: Fallen Order (****) overcomes a fair bit of jank to emerge as the most satisfying Star Wars action game since Republic Commando in 2005. In terms of its mix of combat and action, it can't match the venerable Jedi Knight series - and Cal Kestis is no Kyle Katarn - and its occasional arbitrary limitations feel random. But the lightsabre duels are great fun, the level design is very solid and at 20 hours or so, it doesn't outstay its welcome. Fallen Order is available now on the PlayStation 4, PlayStation 5, Xbox One, Xbox Series X/S, Google Stadia and PC.
Posted by Adam Whitehead at 15:29

Totally agree with your analysis. A sequel that address the annoying sliding levels, better collision detection and a more charismatic protagonist (the sidekicks were much more fun) will be appreciated. I've written about basically the same points at https://www.brunomassa.com/blog/star-wars-jedi-fallen-order/

Totally agree with your analysis. A sequel that address the annoying sliding levels, better collision detection and a more charismatic protagonist (the sidekicks were much more fun) will be appreciated. I've written about basically the same points at https://www.brunomassa.com/blog/star-wars-jedi-fallen-order/

I really enjoyed this game. I found the level design, planets and some of the puzzles to be thoroughly entertaining. Each of the planets was exceptionally well designed, in my opinion and I felt like I was embarking on an adventure. It was a shame that the game was quite short. It took me 24 hours of gameplay to finish but I enjoyed it enough to want to go back and 100% it. I also liked the fact that Cal was played as an average Jedi and was not too overpowered. Merrim was a brilliant, as was Greez and Cere Junda. BD was a wonderful companion.