Jimmy McGill is a lawyer, struggling financially whilst working as a public defender. His brother Chuck co-runs one of the most prestigious law firms in Albuquerque, but Chuck is sceptical of Jimmy's legal abilities. Jimmy's attempts to win his brother's approval and improve his standing lead him to cut corners and take up dubious cases, bringing him into the orbit of of former police officer Mike Ehrmantraut and a local drugs gang, represented by Nacho Varga. As Jimmy tries to get by, his antics lead him towards his ultimate fate, of taking up the name "Saul" and meeting one Walter White. 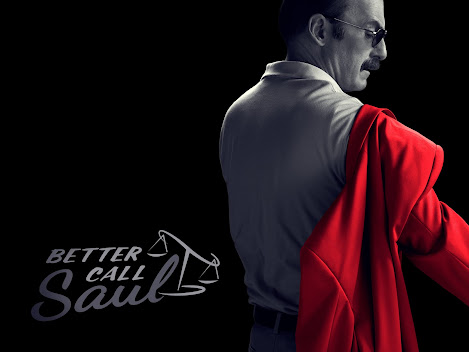 The spin-off series is an interesting proposition. Take an element from a successful show and try to spin that element into its own vehicle. Most of the time, these ideas crash and burn without success. But on occasion, they succeed and do well. On even rarer occasions they are stronger and better (or at least more consistent) than their progenitor show: Frasier, Star Trek: Deep Space Nine, Angel and Xena: Warrior Princess immediately come to mind (and The Simpsons, arguably). Heck, Vince Gilligan once before flirted with a spin-off show of his own, helming The Lone Gunmen as an ancillary appendage of The X-Files. It did not do well.
When the progenitor show is Breaking Bad, widely-acclaimed as one of the best TV shows of all time, the idea of doing a spin-off is a dubious one to start with, especially given that one of the greatest accomplishments of the show is its outrageously good ending. Messing with that mojo seems fraught with peril. But Vince Gilligan didn't get the memo (twice, as he also built the TV movie El Camino onto the end of the original show). Better Call Saul is a spin-off to Breaking Bad which acts as a prequel and sequel simultaneously, expanding on a side-character from the original show developed originally for comedy value: Saul Goodman, played by Bob Odenkirk. 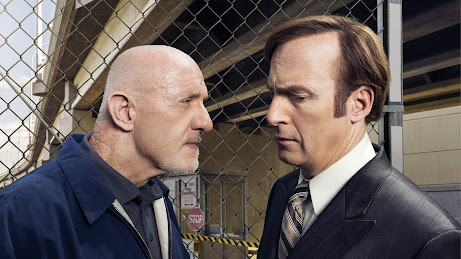 The central brilliance of Better Call Saul is that it is the story of three men, but they're all the same person: Jimmy McGill, the younger man whom we join trying to make a relatively honest living and win the approval of his demanding older brother; Saul Goodman, the snake oil salesman lawyer we met in the original show; and Gene Takavic, the alias Saul is living under in Nebraska as he tries to lay low, several months after the blood-soaked events at the end of Breaking Bad. The show doesn't flip between them too much, with Gene's appearances isolated to vignettes at the start of each season and a closing arc later on, and Jimmy's evolution into Saul becoming the main focus of the series. It's an evolution which is also gradual: Jimmy doesn't start using the Saul alias regularly until the last two seasons and it takes a while for him to kick into the character we met on the mothership show.
For most of its length, then, Better Call Saul is a prequel and that can be even more limiting than most spin-offs. We know Jimmy/Saul will make it to the series finale, we know Mike is going to survive and when other Breaking Bad characters show up, we know they can't eat a bullet. More than once Vince Gilligan and his co-showrunner Peter Gould joked about setting the show in a parallel timeline and just killing Breaking Bad characters without warning, but sanity prevailed. The show then has to put the legwork in to make these stories about characters whose fates you already know more interesting. 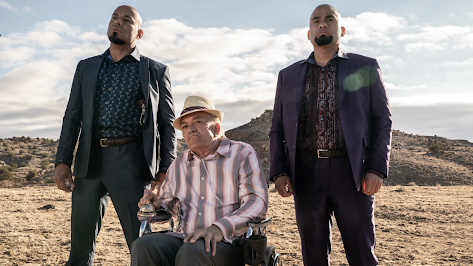 It succeeds. Saul in Breaking Bad was a great character, funny with a hint of pathos, ably delivered by Odenkirk. Jimmy is a much richer, more three-dimensional character, with real reasons for being the person he is. But the show never excuses him. It explains him, but asks for no forgiveness for him. Other characters have bad breaks, awful luck or tough upbringings and improve on them and become better people. Jimmy, as we know from the very start, does not, and watching his decline and fall and how much of his later corruption was built into him from the start is fascinating.
Jimmy is the heart of the show, but it spends almost as much time expanding on Mike. When we met Mike on the earlier show, he was already a cool professional with a moral code but one that had clearly been compromised. Surprisingly, at the start of Better Call Saul he's almost already in the same same position, but the show teases out depths from the character and Jonathan Banks' performance that were not hinted at in the original run. Mike makes for an interesting counterpoint to Jimmy, as Jimmy walks into his situations with a total lack of awareness for the consequences, whilst Mike is always thinking five steps ahead, which means when he realises what he's becoming, he has to confront it with his eyes wide open.

Better Call Saul brings in new characters as well. Michael Mando is a fantastic actor with a powerful screen presence (exemplified in the video game Far Cry 3 and his two-season arc on Orphan Black) who's been looking for a role to make the most of his gifts. Nacho Varga is certainly that role, a drug dealer and criminal who seems dissatisfied with his lot, trying to keep in touch with his family and find an outlet for his ambitions. Nacho might be the most honest character on the show, the one whose humanity grows over the course of the show rather than erodes, and definitely the most underused. Although Nacho's arc spans all six seasons, he appears in barely half of the episodes. But that doesn't detract from Mando's excellent performance or his brilliantly-performed storyline in Season 6. Tony Dalton also joins the show late to deliver an outstanding performance as Lalo, a villain with bags of charm and a vicious streak a mile wide.
Veteran actor Michael McKean is also outstanding as Jimmy's older brother, Chuck, an accomplished and skilled lawyer who is dealing with complicated health issues as well as a lifelong suspicion of his little brother's antics. The relationship between Chuck and Jimmy defines at least half of the runtime of the show and their constant wary circling around one another, switching from loathing to sympathy to contempt to love, is a constantly challenging balancing act for both writers and actors, and a challenge they rise to. Also outstanding is Patrick Fabian as Chuck's partner, Howard, whom is presented initially as an antagonist, but again is fleshed out beyond that to become a more interesting, complex character, moving from an unlikable arsehole to one of the most sympathetic characters on the show over the course of his evolution. 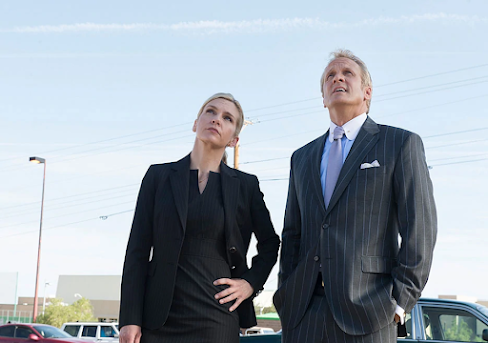 If the cast has one absolute standout - and in this cast that's a very hard call - it's the Emmy-nominated but not winning (so far!) Rhea Seehorn as Kim Wexler, Jimmy's ally on the inside at his brother's law firm, a tough but fair lawyer with a keen legal mind and a high sense of integrity, who indulges Jimmy's antics up to a point. Her evolution over the course of the series is as good as anyone's, and Seehorn's performance continuously ups the ante, delivering ever more riches of character.
Of course, any character who appears in Saul and doesn't appear in Breaking Bad may have the sword of Damocles hanging over them, and the show is mostly fair in not indulging in this too much, and the question of who lives and who dies becomes far less interesting than what they do, and why they do it. 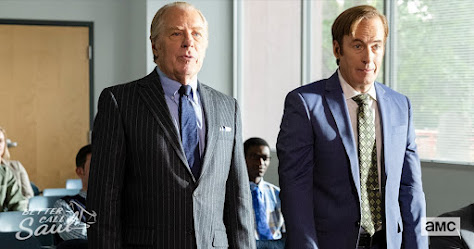 Better Call Saul is a less-obviously immediate show than its forebear. Breaking Bad has that much pithier premise ("a high school teacher can't afford cancer treatment, turns into a meth dealer crime lord,") and delivers more obvious dramatic twists every few episodes. Better Call Saul is subtler and more restrained. Breaking Bad signalled its season finales with major character deaths and sometimes actual massive explosions; Better Call Saul's often twist on a single line of dialogue between two characters. That's not to say that Better Call Saul is completely bereft of action, especially as the cartel storyline becomes prominent in its second half, but it's more strategic in how it deploys mayhem and murder, and makes those moments count so much more powerfully by building up to them with almost forensic foreshadowing and scene-setting. More than once the show feels like it's spinning its wheels mid-season, only for later episodes to take these widely-scattered plot threads and tie them together in the impressive ways.
Are there more substantial criticisms? Well, it inherits one issue from Breaking Bad, which is severely underusing the excellent Laura Fraser as Lydia (who gets even less screen time this time around). A few times you might wonder if a story beat could have been delivered faster with less buildup. But in most respects Better Call Saul improves on its forebear, such as having the same number of episodes but splitting the action across six shorter seasons rather than five longer ones gives the show more focus.
Better Call Saul (*****) is fantastically acted, beautifully written and peerlessly constructed. It stands by itself as a fantastic slice of television drama but also builds on and enhances its predecessor show as well. The series is available to watch in full via AMC in the US and Netflix in most of the rest of the world.
Thank you for reading The Wertzone. To help me provide better content, please consider contributing to my Patreon page and other funding methods.
Posted by Adam Whitehead at 18:53