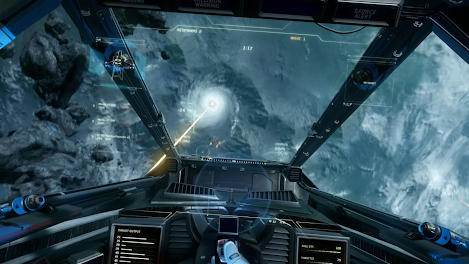 Star Citizen started development in 2011 and was revealed to the public in the autumn of 2012 with a Kickstarter campaign. The initial Kickstarter campaign was relatively modest, drawing in $2 million. However, Cloud Imperium Games allowed crowdfunding to continue directly between fans and the company, resulting in a continuous revenue stream. By the end of 2014 funding had reached $65 million and $127 million by September 2016.

Star Citizen is the brainchild of veteran video game designer Chris Roberts. Roberts began his career in the 1980s working on games on the BBC Micro like Stryker's Run (one of the very first video games I ever played) before moving onto much more powerful machines. In 1990 he released the game that made his name, Wing Commander, a space combat simulator with a strong storyline attached. Several sequels followed and saw the game branch into full motion video cutscenes, using actors like John Rhys Davis (Indiana Jones, The Lord of the Rings) and Mark Hamill (Star Wars) to tell increasingly elaborate stories about the war between humanity and the alien Kilrathi. After the release of Wing Commander IV and Wing Commander: Privateer 2 in 1997, Roberts moved on to working on a Wing Commander movie. The film, released in 1999 and starring Jurgen Prochnow, Freddie Prinze Jr., Saffron Burrows and David Suchet, was critically derided.

Roberts returned to gaming, producing with his brother Erin the games Starlancer (2001) and Freelancer (2003), which were set in a shared universe. Starlancer was a story-focused, single-player game with a strong narrative and linear campaign, whilst Freelancer was envisaged as a more freeform, open-world game akin to Elite or Privateer, with a bigger focus on online multiplayer. After multiple delays, budget issues and concerns over "feature creep," not to mention a buy-out by Microsoft, Freelancer was released in 2003 with a reduced focus on the multiplayer approach and a narrative storyline in place. Roberts returned to working in the feature film industry, believing it was not possible to make a game based on his vision with the resources available in the industry at the time.

Star Citizen marks Roberts' unfettered vision for a science fiction video game set in a large, open universe that the player can explore as they choose. They can own multiple spacecraft and take part in trading, mining and mercenary work. The game features a first-person mode, allowing characters to walk around their spaceship, take part in boarding actions and leave the ship to engage in combat, negotiations or discussions in person. The game will have a storyline of sorts, but will rely on online multiplayer for most of its dynamic plot generation.

The game also incorporates a whole second title using the same engine and assets, Squadron 42. Squadron 42 will be a more linear, story-focused and single-player game akin to Starlancer and the Wing Commander series, guiding the player through a lengthy story campaign featuring characters modelled on and voiced by actors including Gary Oldman and Gillian Anderson (plus a returning Mark Hamill.

Star Citizen has raised most of its money through direct player donations and contributions, including the sale of more powerful and capable spacecraft they will be able to use in the game itself. Almost 4.1 million individuals have contributed to the funding scheme. It has also raised over $60 million in external, private investment.

The game has attracted criticism for its funding methodology and its extended development time, with frequently missed deadlines and an apparent overload of feature creep, with development reportedly focusing on things like realistic sheet deformation for beds rather than optimised performance (the current build is noted as being very laggy even for top-end graphics cards). Newcomers to the early access version of the game have also criticised it for a very steep learning curve and almost non-existent tutorials. However, its fanbase has also praised the game's commitment to unparalleled levels of detail at both the macro and micro levels and its focus on immersion, as well as the potential for highly varied missions incorporating both spacecraft and ground combat, and the extended development time has been down to the game doing things that no other title has before attempted (not to mention using an engine - derived from the CryEngine mostly used for first-person shooters - that is perhaps best not-suited for these things).

Whilst scepticism over the game's progress and its funding methods is natural, there does appear to be an interesting and ambitious game design at work here, and the fact you can play it right now does show where a lot of the work and money has gone. What is astonishing is that after ten years, people are still funding the game to a very high level (in the time it's taken me to write this article, the game has raised around $4,400; the game raised $75,000 yesterday by itself), showing a remarkable degree of confidence and trust in the project.

It's hard to get precise figures, but the previous most expensive video game development budgets for titles like Red Dead Redemption 2 and the in-development Grand Theft Auto VI are thought to be more to the in the region of $200 million, with around the same for marketing. Star Citizen pulling in vastly more money, mostly for development alone, is an impressive achievement.

Star Citizen and Squadron 42 remain in development with no estimated release date at this time.

Ah, harking back the good old days of waiting for Freelancer, downloading trailers from wherever, tiny and grainy, marvelling at the hints of grand stories. It was a nice game in the end, but there really should have been a sandbox mode. The storyline was bland, and resembled Privateer a lot, and by the time you'd finished it, you'd blurred past lots of interesting areas that you'd become to overpowered to bother returning to. I miss Privateer, where you sandboxed around until you were ready for the story.