PAPER GIRLS cancelled at Amazon, despite being excellent

Sadly, but perhaps inevitably, Paper Girls has been cancelled at Amazon after a single season. 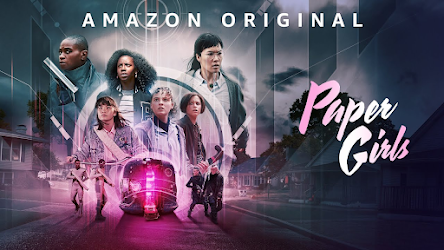 The show launched in late July to critical acclaim, but decidedly muted viewing figures. Amazon's marketing for the show was lacklustre, as Amazon shifted its marketing efforts towards the decidedly less-accomplished but staggeringly more expensive Rings of Power, which launched on 2 September, and its marketing seemed custom-designed to make the initially 1980s-set show look like a Stranger Things rip-off (despite Paper Girls' source material predating Stranger Things and the story not being anything like it).

As I said in my review, Paper Girls was the rare comic book adaptation that dramatically improved its (oft-messy and underdeveloped) source material by focusing much more on characterisation, whilst also ensuring a solid amount of plot development and action in each episode. The show also featured superb performances by seasoned hands Adina Porter, Ali Wong, Nate Corddry and Jason Mantzoukas, but outstanding turns by its four young leads: Camryn Jones, Riley Lai Nelet, Sofia Rosinsky and Fina Strazza. I suspect great things are ahead for all of them.

The show was produced by Legendary Television for Amazon but it does not appear that there's any hope of another channel or streamer taking on the project. Fortunately, the graphic novel by Brian K. Vaughan and Cliff Chiang remains available for anyone wanting closure on the story.

They didn't advertise it all as nearly I I can tell. I lterally found out about it by scrolling through Prime looking for something else. This show should be part of some kind of compilation with "I am not ok with this", awesome fantasy shows focused in interesting female characters that will never get another season because no-one has ever heard of them.