November 1st, 1988. Erin Tieng starts her first-ever early morning paper round, to the distress of her over-protective mother. She meets three other paper girls doing the same neighbourhood: Tiffany Quilkin, Mac Coyle and KJ Brandman. Their first challenges are late-night revellers and pranksters not over Halloween, followed by an escalation to getting involved in a temporal war spanning thousands of years. The girls have to navigate the timelines to find a way home, whilst also learning maybe far more than they should about their own personal futures. 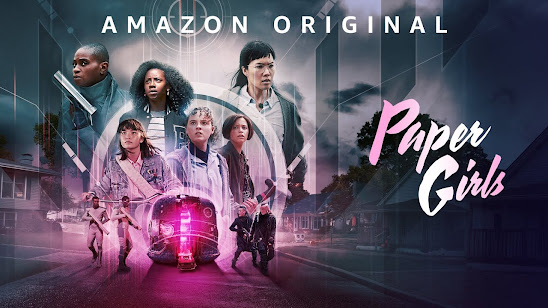 Paper Girls started life as a comic by Brian K. Vaughn and Cliff Chiang, which launched in 2015. The comic ran for 30 issues, ending in 2019 and wracking up significant critical acclaim along the way, including five Eisner Awards. Along with Stranger Things - which launched on Netflix ten months later - the comic was credited as being part of a wave of 1980s nostalgia-driven properties. Unlike Stranger Things, Paper Girls was credited for interrogating its nostalgia in a deeper way, and shining a light on the less pleasant aspects of the time period.

The television adaptation of Paper Girls is that rarest of beasts: a television adaptation that significantly improves on its source material. The same creative team as the brilliant Halt and Catch Fire are involved, so are no strangers to the 1980s nostalgia bandwagon with a darker and more cynical twist. But Paper Girls works primarily because the writers have the confidence to slow the comic's manic pace and focus more on character development. The comic is infamous for being relentless, throwing new ideas, time periods, factions and characters into the mix like a demented chef with a superfast new blender, which was both invigorating but also risked becoming seriously confusing at times. The TV show isn't slow-burning by any means, but it does know it doesn't have to be at full throttle all the time.

The show follows the comic in zeroing in on the central cast of four characters: Erin, Mac, KJ and Tiffany. It also achieves the near-impossible of finding the perfect cast to embody them: Riley Lai Nelet, Sofia Rosinsky, Fina Strazza and Camryn Jones respectively. These young actresses nail their characters from the opening moments and across the season rise to the challenge of having to drag them through the emotional wringer as they learn about their own futures, occasionally having arguments with their older selves about how their lives are nothing like what they had imagined.

They are ably supported by a top-notch supporting cast, led by Ali Wong and Sekai Abeni as the older versions of Erin and Tiffany, with the actresses doing great jobs of making them appear to be the same people separated by decades (shades of Yellowjackets, except the two incarnations of each character get to meet one another). There's also fantastic support by Adina Porter (True Blood, The 100), Nate Corddry (For All Mankind) and Jason Mantzoukas (Parks & Recreation, Brooklyn Nine Nine).

The show succeeds by mixing its time-travelling, crazy SF antics with more human stories. Erin dreams of graduating from college and becoming the first Asian-American President of the United States; she occasionally breaks from the action to filter events through an imagined Presidential TV debate with Ronald Reagan (the CG Reagan is the show's weakest link, effects-wise). KJ is worried that her future will be determined by her controlling parents. Tiffany dreams of going to a top university and using her intelligence for good purposes. Destitute Mac doesn't even know what her future could be. As each of them discovers their destinies, they have to confront the people they're going to be (literally) and what choices they can make in the past to change things for the better. This theme is a minor element in the comics but becomes a much bigger focus in the TV show.

But the time-travelling, crazy SF elements are still here and they show up in a big way. City-sized spaceships, raging mech fights, gun battles between time-travelling armies and dinosaurs (!) are all present and correct, just slowed down a bit and given more weight than in the comics.

The series starts well, ticks along nicely and ends on a hell of a cliffhanger. The cast is exemplary, the writing is strong and the effects are superb, not being allowed to overwhelm the show as they have for other properties. Above all, the show knows how to use its time-travelling premise to tell really human stories. The only weak link is that the throttled-down pace is maybe a tad too throttled-down, and the main storyline feels like it goes on a break a few times until they get back on track.

Paper Girls (****½) is the rare example of a TV adaptation that improves on its source material to become a compelling watch. It is available now on Amazon Prime Video worldwide.

Thank you for reading The Wertzone. To help me provide better content, please consider contributing to my Patreon page and other funding methods.
Posted by Adam Whitehead at 11:40