News has sadly broken that veteran British actor Bernard Cribbins, OBE has passed away at the age of 93. He is best-known for his work on TV shows The Wombles and Doctor Who, and as part of the long-running British comedy film series Carry On. He also found fame as a successful singer during the 1960s and was active in charity work for military veterans. 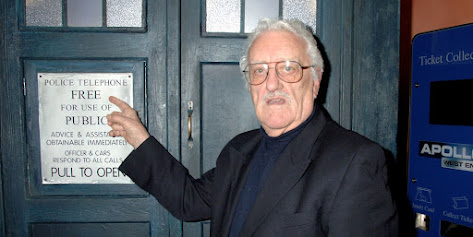 Born in 1928 in Oldham, Lancashire, Cribbins grew up with his two siblings in very poor conditions. His father "dabbled in acting," giving Cribbins the idea of pursuing it as a career. He worked as an assistant stage manager in a local theatre, getting his first experience of treading the boards. He then worked with the Oldham Repertory Theatre. He was too young to fight in World War II, but subsequently did National Service with the Parachute Regiment. During this period he was deployed to Palestine, then a British Mandate. He later related some of his experiences to Russell T. Davies, who used them as backstory for Cribbins' character Wilf in Doctor Who.

After completing his service, Cribbins returned to acting, making his West End debut in 1956. When it was realised he could sing, he was recruited for musicals and revues, which resulted in him recording his first single, "Folksong" from And Another Thing. In 1962 Cribbins hit the UK Top Ten with three comic songs: "The Hole in the Ground," "Gossip Calypso" and the major hit "Right Said Fred," which occasionally crops up on the radio even today. This period saw Cribbins become something of a household name and rubbed shoulders with the Beatles.

Cribbins began appearing in British films in the late 1950s, starting with Yangste Incident in 1957. His highest-profile roles came through collaborations with Peter Sellers, in Two-Way Stretch (1960) and The Wrong Arm of the Law (1963), followed by two appearances in the Carry On series when it was at the height of its fame: Carry On Jack (1963) and Carry On Spying (1964). He later returned to the series for its reunion film, Carry On Columbus (1992). He also appeared in the classic children's film The Railway Children (1970) and in Alfred Hitchcock's Frenzy (1972).

For television, he starred in his own TV series for ITV, Cribbins (1969-70) and had a memorable role in Fawlty Towers as a spoon salesman mistaken for a hotel inspector. He established himself as a star of children's television by narrating The Wombles (1973-75) and reading more stories on Jackanory than any other celebrity presenter, notching up 114 appearances from 1966 to 1991. He voiced a road safety film campaign in the 1960s, advertised Hornby model trains and hosted the children's panel game show Star Turn in the 1970s.

Cribbins is arguably most famous for his long-running association with Doctor Who. He debuted by playing companion Tom Campbell in the 1966 feature film Daleks: Invasion Earth 2150 AD, alongside Peter Cushing as the human Dr. Who. In 2007 he appeared in the audio drama Horror of Glam Rock and, later that year, was cast by Russell T. Davies as a London newspaper seller in the 2007 Doctor Who Christmas special, Voyage of the Damned. Davies enjoyed his performance so much he decided to bring him back as a recurring character in the fourth series in 2008, retconning him as the grandfather of Donna Noble (who had previously appeared in the 2006 Christmas special The Runaway Bride), Wilfred Mott. After a series of guest spots, he was "promoted" to full companion status for David Tennant's final episodes in the role, The End of Time Part 1 (2009) and Part 2 (2010). Notably, it is to save Wilfred's life that the Tenth Doctor exposes himself to a dangerous level of radiation, triggering his regeneration.

Cribbins returned to the role in early 2022, playing Wilfred again for (at least) the first of three anniversary specials due to air for Doctor Who's 60th anniversary in 2023. For this appearance he was reunited with David Tennant and Catherine Tate.

These roles meant that Cribbins holds a number of distinctive Doctor Who records: the only actor to play two different companions on Doctor Who, the only actor to appear as a companion both the feature film and TV versions of the franchise, the only actor to face the Daleks in film and television, the oldest companion (he was 81 during his last appearance in The End of Time Part 2 and 93 during filming of the 60th anniversary specials) and the actor with the longest association with the programme, from 1966 to 2023 (although this may be broken if any actor who appeared in the show in 1963-66 was to return).

Cribbins held several honours, including the General Service Medal for his service in Palestine in 1947-48, a special award at the British Academy Children's Awards for his work in children's television in 2009, and the JM Barrie Award for his contribution to children's arts in 2014. In 2011 he was appointed an Officer of the Order of the British Empire. Cribbins was also engaged with charity work, particularly for military veterans. He worked with the Support Our Paras charity and the Fishing for Heroes organisation.

Cribbins married Gillian McBarnet in 1955 and they had a lifelong romance and partnership, lasting until her death in October 2021. They had no children. Cribbins survived prostate cancer in 2009 and later reported being in excellent health, occasional back conditions excepted. In 2018 he published an autobiography, Bernard Who? 75 Years of Doing Just About Anything, which he later recorded as an audiobook.

Bernard Cribbins was hugely respected for his acting skills, his singing, his charity work, his comedy and his relentless good cheer. He was a professional who always brought his A-game to every role, no matter how big or how small, and something of a British institution. He will be sorely missed, although we have at least the pleasure of one last performance in Doctor Who to look forwards to next year.