Thor, God of Thunder, is feeling listless. He helped defeat Thanos and save the universe, but in the process lost several of his friends. He has joined the Guardians of the Galaxy, helping defeat evil on many worlds, but his mood swings and tendency towards collateral damage soon sours even that relationship. A threat to an old friend brings him back to Earth and the town of New Asgard, where he is unexpectedly reunited with his old girlfriend, Jane, who now wields the power of the reforged Mjolnir. A new threat has arisen, a vengeful warrior dedicated to the destruction of all the gods in the universe, and it will take the power of two Thors to stop him. 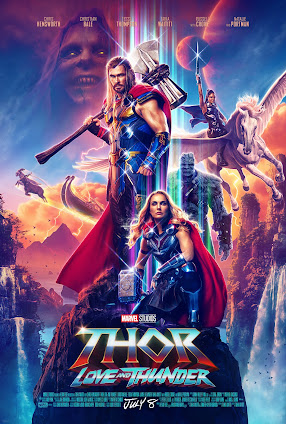 Thor: Love and Thunder is the twenty-ninth Marvel movie and the fourth solo film to focus on the character of Thor. Thor is the first MCU character to get this honour, with Iron Man and Captain America both bowing out after three solo instalments and barely any other MCU characters getting two films (so far). The reasons for Thor's latest return are clear: Chris Hemsworth's rock star charisma is still barely matched elsewhere in the MCU and Taika Waititi's infectious energy and colourful direction made Thor: Ragnarok one of the most fun and rewatchable movies in the franchise. Bringing him back for another turn made sense on paper.

As it turns, it's a lot harder for lightning to strike twice (so to speak, about a Thor movie). My main feeling after leaving the cinema was a renewed admiration for Thor: Ragnarok: bringing together elements of comedy, horror, superhero antics and tragedy as well as that film did is very, very hard and it turns that even the exact same team can't make that magic work again.

The first half of Love and Thunder is a barely-mitigated mess. Jokes misfire, or are lost in a cacophony of sound effects and explosions. After three solo movies and four Avengers movies of seeing Thor's powers in action, there's not a huge amount of surprise in seeing him take out low-level bad guys with ease, and the extended cameo by the Guardians of the Galaxy is pretty pointless (making you wonder why they bothered setting Thor up with them in Endgame in the first place). Taika Waititi's Korg is also here, a gag that feels like it's straining at the overused end of the spectrum. There's a horribly overused metaphor about Thor wanting to reunite with Mjolnir, making Stormbringer jealous. One gag in this vein would be fine, but it ends up being milked until all joy disappears from the notion. Eventually Thor ends up back on Earth and reunites with Jane (Natalie Portman returning to the franchise for the first time in nine years, an Endgame voiceover excepted). Needless to say, Christian Bale's villainous Gorr is up to no good and the two Thors join forces with Valkyrie (Tessa Thompson, with not much to do) to stop him.

Once the film hits its midway mark, it fortunately improves a great deal. Russell Crowe brings a surprisingly accomplished amount of camp to the role of Zeus, King of the Gods, and sequences in which Thor temporarily bequeaths his power to others are both witty and clever. Bale is not well-served by the script, scenes with him being all whispering menace working okay, others with him being funny or whimsical misfiring (and making Bale possibly the most poorly-served MCU villain since Christopher Eccleston in The Dark World). But his character arc is relatively effective, leading to an ending that does start off being the traditional MCU CGI overload (not helped by Waititi recycling a lot of shots and poses from Ragnarok) but abruptly segues into a more nuanced character piece. The acting from all parties in the finale - Hemsworth rising to the high standards set by Portman and Bale, two of the finest actors of their generation - is great. We also get the requisite post-credits sequences, including an eyebrow-raising but possibly genius casting decision for a fan-favourite Marvel Comics character, and a nice nod to some past minor MCU characters.

Ultimately, Thor: Love and Thunder (***) is a mess with some very weak humour and characterisation that improves over its runtime and by the end has turned into a stronger film. But the solid ending to the movie can't make up for all the dud punchlines, empty action and confused metaphors that the movie opens with. The result is a lesson that yes, you can have too much of a good thing and no, not everything Taika Waititi touches turns to gold. The movie is on general release worldwide right now.

Thank you for reading The Wertzone. To help me provide better content, please consider contributing to my Patreon page and other funding methods.
Posted by Adam Whitehead at 14:48

Seemed to me that Endgame was setting him up to be in Guardians 3 then back to solo in Thor 4, but when Guardians 3 got pushed back… welp