George R.R. Martin offers first WINDS OF WINTER update for a while, but no release date; book may be "300 pages" longer than any previous novel

Song of Ice and Fire author George R.R. Martin is plugging away at the sixth and hoped-to-still-be-penultimate novel in the series, The Winds of Winter. On Tuesday it will be eleven years to the day since the previous book came out, and fans are understandably keen for any info on the next volume. Martin has now provided an interesting update. 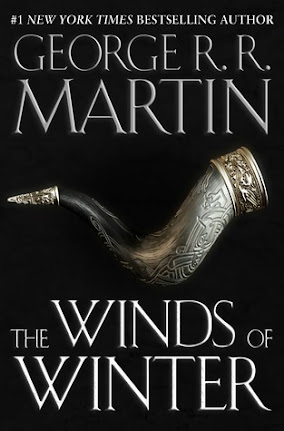 Although not being drawn on how many pages or chapters he had completed (although he had previously noted the book will likely be longer than A Storm of Swords and A Dance with Dragons, the longest previous books in the series at around a thousand pages in hardcover apiece), Martin did note that as the story has developed, it has moved further and further away from events depicted at the end of the television adaptation, Game of Thrones.

Martin notes that some things that happen in the later seasons of the show will still happen in The Winds of Winter (and its as-yet unbegun successor, A Dream of Spring), but "not quite in the same ways." But also, "much of the rest will be quite different." He sees this as a natural result of how the TV show pared down plotlines from the books, not even bothering to introduce characters like Lady Stoneheart, Young Griff, the Tattered Prince, Darkstar or Jeyne Westerling, whilst other characters had very different portrayals (most notably Euron Greyjoy, and George specifically notes that).

No release date is hinted at, although no doubt every word will thoroughly examined by the Internet to discern clues. In the meantime, HBO is launching its Game of Thrones prequel TV series, House of the Dragon, on 21 August. An illustrated history of the Targaryen family, The Rise of the Dragon, is due in October.

UPDATE: GRRM has appeared on the Game of Owns podcast to discuss the history of the series, his work on the television series and progress on The Winds of Winter. Martin notes that he has almost completed multiple character arcs for the book (including Tyrion) and the book will be considerably longer than A Storm of Swords or A Dance with Dragons, more like "300 pages" longer (to the point that the book being split in two is possible).

Email ThisBlogThis!Share to TwitterShare to FacebookShare to Pinterest
Labels: a game of thrones (TV series), a song of ice and fire, george r.r. martin, the winds of winter

"Martin did note that as the story has developed, it has moved further and further away from events depicted at the end of the television adaptation, Game of Thrones."

That's good news. That adaption sucked rotten potatoes since season 4 if not earlier. Glad to hear the book isn't going along the lines D&D corrupted out of Martin's summary.

I'm perfectly fine if he doesn't finish. The first three were by far the most interesting, and judging by AFfC and ADwD, the Winds of Winter will be more dreary accounting work in a world where the detail level has grown exponentially. It's like a simile for entropy - lots of fire and energy and dynamics in the beginning, but the reaction sends the particles flying in all directions, and the whole system cools and slows down. Payoffs happen where strong characters meet and interact, and Martin has to write more and more pages for character meetings to make sense in the world he's created.

For me, the killing of Tywin Lannister was what made it all unravel. He was the last character to truly provide tension and intrigue, a consistent source of energy wherever he went. Fair enough that Ned and Robert had to die for the plot to keep moving, but Martin's "anyone may die" concept can just as easily accidentally kill an engaging story in its singleminded drive to surprise and shock the readers.

My heart is with Martin (and Rothfuss and Lynch). He started work on ASoIaF nearly half a lifetime (his own) ago. What kind of person was I half a lifetime ago? What were my interests? Wildly different from my interests today. Martin has developed and grown as a person, but he's bonded to something he created in a previous life, and has to deal with stuff going on trajectories that maybe don't interest him at all today. Creative burnout sucks, and he must have had so much of it.

I cannot express how sad it would be to wait over a decade and get half a book. If he does a split like Feast that means he releases something like a 1,063 manuscript page book and holds back the remaining 758 (1,521 from Storm example + 300 over - 1,063) pages. We know from the last 20 years that when he holds back pages he can't help but rewrite them. I shudder to think of how long we will be waiting for the end if we have 2 more books to go and the current pattern is each book is taking longer than the last. I hope his publisher can work with George to identify some sort of new way of working to make this better and hopefully George is open to change in some fashion.

If they split the book then both books should be released at the same time, so we don’t have to wait 6-8 months to finish the story line.

The AFFC/ADWD split was because the combined book was far too large to publish in one volume but still nowhere near done, so splitting between the complete and incomplete characters was the way to go. With TWoW, such a split would only come when the book is done and locked, with the two parts coming out closely together.

If he does split, he will split by character again. He’s done it twice before. Before Feast and Dance he had a finished Wild Cards book that had to be split which became Ace in the Hole and Dead Man’s Hand. I would love a limited edition where those two were put back together. That’ll never happen though.