Anthony Ryan's Raven's Shadow series has been optioned for television by Lone Wolf Pictures. Curiously, the option sounds like it will ignore the highly-acclaimed first novel in the series, Blood Song, in favour of focusing on the much more critically-derided sequels. 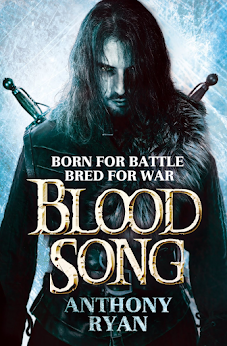 Ryan self-published Raven's Shadow and the novel immediately garnered critical acclaim and strong sales. It was picked up for professional publication very quickly and was published in 2013. It was followed by Tower Lord (2014) and Queen of Fire (2015); Tower Lord had mixed reviews and Queen of Fire was critically mauled. The entire Raven's Shadow trilogy has often been cited as a good example of a fantasy series where the first book is excellent but the sequels are considerably weaker.

Ryan has published additional books in the same world and also in different settings, and these have all been much more warmly received.

It sounds like the TV option - inexplicably given the bland title Queen of Fire - will not adapt Blood Song and will instead focus on the story in the two sequel novels, which is a...curious choice.

The series was previously optioned in 2019, but nothing came out of that project.