Sadly, news has broken that the actor David Warner has passed away at the age of 80. 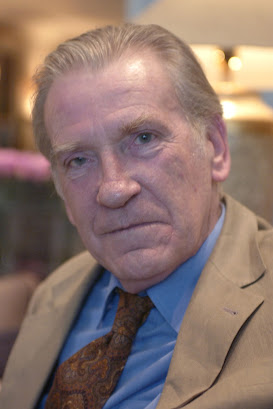 Born in Manchester in 1941, Warner graduated from RADA in London and made his professional stage debut in 1962. He joined the Royal Shakespeare Company in 1963 and was soon making his name on stages all around Britain, with an impressive ability to pick up different roles very quickly.
He made his feature film debut in 1963 in an adaptation of Tom Jones, and memorably played opposite Bob Dylan in a BBC TV play Madhouse on Castle Street, the same year. By the start of the 1970s he had established himself as a low-key but versatile performer on stage, in the cinema and on television.
His big breakthrough role came in 1976 when he played Keith Jennings in The Omen, which opened him up to bigger Hollywood roles. He played major roles in Time After Time (1979), Time Bandits (1981), Tron (1982) and Teenage Mutant Ninja Turtles II (1991).
In 1989 he began a successful collaboration with the Star Trek franchise, playing Ambassador St. John Talbot in Star Trek V: The Final Frontier (1989), Klingon Chancellor Gorkon in Star Trek VI: The Undiscovered Country (1991) and the Cardassian Gul Madred in the two-part Star Trek: The Next Generation episode Chain of Command. Infamously, Warner's character tortured Patrick Stewart's Captain Picard with a psychological device, leading to one of Stewart's most famous moments in the series.
Warner developed an affinity for genre roles, also appearing as Thomas Eckhardt in Twin Peaks (1991), Aldous Gajic in Babylon 5 (1994), Jor-El in Lois & Clark: The New Adventures of Superman (1994), Inspector Langford in The Outer Limits (1999), Dr. Latham in Total Recall 2070 (1999), Admiral Tolwyn in Wing Commander (1999), Sandar in Tim Burton's Planet of the Apes (2001), Lord Downey in the Discworld TV movie Hogfather (2007), and Abraham van Helsing in Penny Dreadful (2014).
His distinctive voice also saw him much sought-after for animation work, playing Ra's al Ghul in Batman: The Animated Series (1992-95), Herbert Landon in Spider-Man (1995-97) and the Archmage in Gargoyles (1995). He also acted in video games, appearing in Privateer 2: The Darkening (1996), Fallout (1997), Descent 3 (1999), Star Wars: Force Commander (2000) and Star Trek: Klingon Academy (2000), reprising the role of Chancellor Gorkon.
In 1997 he enjoyed probably the highest-profile role of his career by playing the villainous Spicer Lovejoy in James Cameron's Titanic. The film went on to become the highest-grossing movie of all time.
Warner also gave what may remain the single greatest villain voice performance - and maybe the greatest video game voice performance ever - as Jon Irenicus in Baldur's Gate II: Shadows of Amn (2000), its expansion Throne of Bhaal (2001) and prequel Baldur's Gate: Siege of Dragonspear (2016).
He also played numerous roles in the Doctor Who audio dramas from 2003 to 2018, including the Doctor himself in six plays. Remarkably, he only appeared in live-action in Doctor Who once, as Professor Grisenko in the 2013 episode Cold War.
Remarkably, despite many fantastic performances throughout his career, Warner was rarely rewarded by institutions. He achieved a BAFTA nomination for Best Actor for his 1966 performance in Morgan: A Suitable Case for Treatment, and he won an Emmy Award in 1991 for his portrayal of Pomponius Falco in Masada. He was also nominated for an Emmy for his role as Reinhard Heydric in Holocaust (1978) and was nominated by the Screen Actor's Guild as part of the ensemble for Titanic (1997).
A versatile and charismatic actor who always got the assignment and gave his best, David Warner will very much be missed.
Posted by Adam Whitehead at 11:23