HBO releases full trailer for HOUSE OF THE DRAGON

HBO has unveiled its first full trailer for House of the Dragon.

Soundtracked by a cool cover version of "Venus in Furs" by the Velvet Underground, the trailer opens with King Viserys Targaryen (Paddy Considine) expanding on a dream he's had.

Viserys: "The dream was clearer than a memory, and I heard the sound of thundering hooves, splintering shields and ringing swords. And I placed upon the Iron Throne, and all the dragons roared as one."

We cut to an image of a dragonrider flying high over the city of King's Landing, with the great Dragonpit (the home of House Targaryen's dragons in this time period) in the background.

Over scenes of everyday life in King's Landing and the meeting of the small council, we hear conversation between Otto Hightower (Rhys Ifans), the Hand of the King, and the other King's advisors, including Lyonel Strong (Gavin Spokes), master of laws, and Corlys Velaryon (Steve Toussaint), master of ships.

Otto Hightower: "I consider the matter urgent, that of your succession"

Lyonel Strong: "Who else would have a claim?"

Lyonel Strong: "Rhaenyra? No queen has ever sat the Iron Throne."

Corlys Velaryon: "The king has an heir: Daemon Targaryen."

Viserys: "I will not be made to choose between my brother and my daughter."

We see Prince Daemon Targaryen (Matt Smith) competing in a joust and Princess Rhaenyra (Milly Alcock) walking along a beach with Laenor Velaryon (Theo Nate). We then see Prince Daemon accepting the salute of the City Watch of King's Landing, followed by Rhaenyra and Ser Harrold Westerling, Lord Commander of the Kingsguard (Graham McTavish), greeting Ser Criston Cole (Fabien Frankel), another member of the order.

We then see Princess Rhaenys Velaryon (Eve Best), the wife of Lord Corlys, consulting with her husband.

Rhaenys: "Rhaenyra's succession will be challenged. Knives will come out."

Daemon Targaryen approaches his brother on the Iron Throne but is stopped by the Kingsguard at swordpoint. This is followed by Alicent Hightower (Emily Carey) talking with King Viserys about his duty.

Alicent: "You are the king. Your duty is to take a new wife."

Viserys and Daemon then meet. Daemon is clearly unhappy.

Viserys: "I have decided to name a new heir." 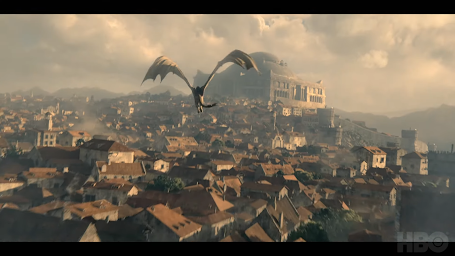 The various factions then meet on the island of Dragonstone, where a furious Daemon draws his sword on the King's Hand.

Rhaenyra then asks Ser Criston Cole a hard question and gets even harder answers from Rhaenys.

Rhaenyra: "Do you think the realm will ever accept me as their queen?"

Rhaenys: "A woman would not inherit the Iron Throne, because that is the order of things."

Rhenyra: "When I am queen I will create a new order."

The story then shifts forwards in time some years, when both Rhaenyra and Alicent are older (now played by Emma D'Arcy and Olivia Cooke) and events have moved on.

Reggio Haratis: "Your family has dragons."

Viserys: "They're a power man should never have trifled with."

No idea on who Reggio Haratis is, but he sounds like an Essosi. More scenes of battle and the aftermath of battle, possibly the war against pirates in the Stepstones where Corlys and Daemon distinguished themselves. We also see Daemon with his dragon, Caraxes the Blood Wyrm.

Alicent: "If Rhaenyra comes into power, she can cut off any challenge to her succession."

Rhaenyra: "If I am to inherit the Iron Throne, she will block my way."

Both Alicent and Rhaenyra now have children, so the stakes for the succession of the Iron Throne have grown stronger. Aemond Targaryen (Ewan Mitchell), Alicent's second son, is seen in (mock?) combat with Ser Criston Cole.

Otto: "Our hearts remain as one."

Alicent: "Our hearts were never one." 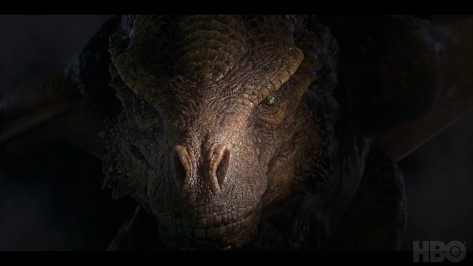 We see a shift from the young Alicent and Rhaenyra as close childhood friends to adults separated by power and ambition, as well as more scenes of battles in the Stepstones, with Lord Corlys in the thick of the action.

Rhaenys (to Alicent): "Have you never imagined yourself on the Iron Throne?"

We see more dragons flying over Dragonstone, people in King's Landing, the Velaryons arriving in the throne room, more scenes of the aftermath of battle, dragons roasting people alive and Alicent threatening Rhaenyra with a dagger.

Alicent: "Where is duty? Where is sacrifice?"

Rhaenyra: "Now they see you as you are."

The trailer closes with a shot of a single dragon.

In a new article at The Hollywood Reporter today, HBO also confirms that the time-jump in Season 1 will take place roughly halfway through its first ten-episode season, and they are currently envisaging a 3-4 season run for the show with the possibility of moving to a new time period once the Dance of Dragons has been covered.

House of the Dragon launches on 21 August on HBO.

Email ThisBlogThis!Share to TwitterShare to FacebookShare to Pinterest
Labels: a game of thrones (TV series), george r.r. martin, house of the dragon