It's been rumoured for a while, but it's now been seemingly confirmed that we will be getting multiple Doctor Who special episodes for the 60th Anniversary in 2023. 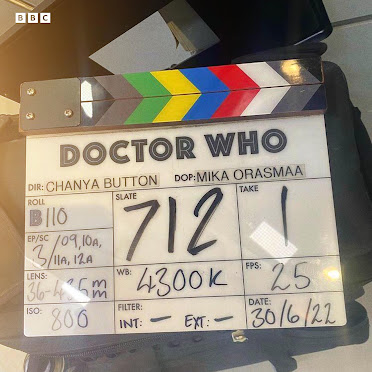 Previously a single special written by returning Russell T. Davies and directed by Capaldi-era favourite Rachel Talalay had been confirmed, with David Tennant returning as the Doctor (in an unspecified manner) and Catherine Tate and Bernard Cribbins returning as former companions Donna and Wilfred. Yasmin Finney had also joined the cast as Rose Temple-Noble, believed to be the daughter of Donna and husband Shaun.

New shots confirm that Chanya Button is directing "Episode 3," suggesting that there will be at least three specials in total. Button is a newcomer to Who, but has previously directed for World on Fire, The Spanish Princess and Whitstable Pearl.

Production of the specials began in May and is expected to continue for some weeks. There will then be a pause before shooting of Series 14 proper begins in October or November, with Ncuti Gatwa taking up his role as the Doctor. Gatwa's involvement in the specials is unclear, although he has so far not been spotted on set, suggesting that Tennant will play the Doctor for all three specials before Gatwa takes over full-time. Gatwa is currently shooting the Barbie live-action movie as well as the fourth season of his Netflix series, Sex Education.

Previously, Russell T. Davies had indicated that his first episode would air during the 60th Anniversary of the show, which does not fall until November 2023. However, rumours have been swirling in recent weeks that the specials may start airing some time before that. The BBC have not commented on these reports.

The next confirmed episode of Doctor Who is the "BBC Centenary Special," which will air in October this year as part of the BBC's 100th anniversary programming. The 90-minute special will be Jodie Whittaker's swansong as the Thirteenth Doctor and see her departure from the show, along with showrunner Chris Chibnall and companions Dan (John Bishop) and Yasmin (Mandip Gill).

Have you seen anything indicating other Doctors might show up? I love the 10th, but I was hoping there’d be more.