JV Jones closing in on the end of ENDLORDS

Fantasy author J.V. Jones has provided a significant update on her novel Endlords, the fifth and penultimate book in her superb Sword of Shadows series. 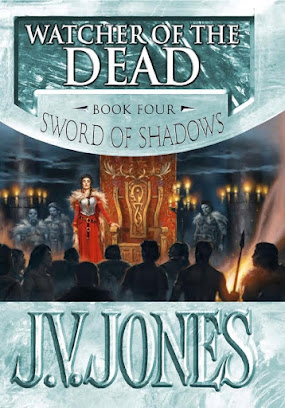 Since the publication of Watcher of the Dead, Jones has dealt with real life issues and problems that cut into her writing time. She began work on the novel again in 2017 and now reports that she is around six months away from finishing the book. The novel will probably be published some time in 2024, depending on the situation with her publishers.

In the meantime, Jones is already considering plans for the last book in the series, which now boasts the working title A Sword Named Loss.

The Book of Words was a solid opening trilogy, but The Sword of Shadows is one of the A-tier of epic fantasies of recent decades, comfortably sitting on a par with Robin Hobb's Ream of the Elderlings series, George R.R. Martin's A Song of Ice and Fire and Steven Erikson's Malazan Book of the Fallen (Jones provided a cover quote for Erikson's first fantasy novel in 1999 that was credited with helping boost sales). Getting another two books in the series will be very welcome indeed.

Email ThisBlogThis!Share to TwitterShare to FacebookShare to Pinterest
Labels: endlords, j.v. jones, the sword of shadows, watcher of the dead

Would you recommend reading The Book of Words first? How much would it increase the enjoyment of the more recent series?

Yes, but I'd be aware that The Book of Words (especially Book 1) is less well-written and more traditional than Sword of Shadows. It gets a lot better as it goes along. It would also allow you to identify the significance of certain characters when they show up in Sword of Shadows.