A Fortress of Grey Ice by J.V. Jones

Ash March has visited the Cavern of Black Ice and stalled the arrival of the evil Endlords, at least for now. She must now make her way to the homeland of the enigmatic Sull, where her true path will be revealed. Meanwhile, Raif Sevrance's role in events seems to have conclude, and he now seeks a life for himself amongst the exiles of the Maimed Men. But it seems that his destiny has not done with him yet, as he is called into the vastness of the Great Want in search of the Fortress of Grey Ice... 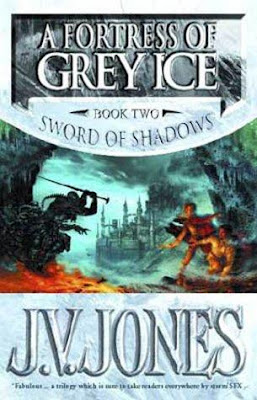 Middle volumes are always the most problematic part for any ongoing series. They don't have a clearly-defined beginning or end and structurally can end up as a bit of a mess if the author isn't careful. In the case of J.V. Jones's Sword of Shadows fantasy sequence this is even more of a danger. Planned to be five books in length, this gives her no less than three middle volumes to navigate through and retain the audience's attention.

She got off to an excellent start with A Cavern of Black Ice, one of the strongest opening volumes to an epic fantasy series ever written, one that showed an impressive growth in writing ability since her debut work, the somewhat more traditional Book of Words trilogy. With its considerably more nuanced characterisation, restrained toned and thorough-but-not-overwhelming worldbuilding (particularly showing that the clans may be relatively primitive, but they are not mindless savages and have complex systems of agriculture and mining), the Sword of Shadows is a more mature and interesting work.

This quality carries forwards into A Fortress of Grey Ice, though Jones is only partially successful in navigating through the problems of middle volume syndrom. On the plus side, she introduces several new storylines (particularly the civil war within Clan Dhoone) which make for interesting reading, expanding the scope of the story and the world without resorting to filler. Raif Sevrance's storyline, as he goes from rejected hero to a member of the Maimed Men to searching for the enigmatic Fortress of Grey Ice, is also structurally well-handled, giving the book a narrative spine with its own beginning, middle and end. Book of Words fans will also appreciate the arrival of Crope, a notable supporting character from that work, and his role in this novel (which ends in the death of a major character so impressively offhand that both Paul Kearney and George R.R. Martin would applaud it). Elsewhere, other characters and storylines suffer. Ash March spends the whole book on a journey from A to B and doesn't even get there at the end of the book. Raina Blackhail's potentially gripping story of political machinations within the Hailhouse are given very short shrift. The Dog Lord's storyline, though entertaining, seems to rely on a few too many obviously unwise decisions for it to be fully convincing.

The star of the book - and probably the whole series - is the wind-lashed, freezing cold landscape of the Northern Territories. Jones's research for this series appears to be formidable, with musings on the dangers of frostbite and how the climate works within an ice desert. George R.R. Martin's descriptions of the land beyond the Wall in A Song of Ice and Fire are impressive, but Jones's depiction of her frozen setting is even more impressive (as the whole series is set there).

A Fortress of Grey Ice (****½) is well-written and finely-characterise, with a formidably vivid setting. The plot and pacing is not as impressive as in the first book, and some storylines feel drawn out, whilst others are given relatively short shrift. However, this is still a well-above-average epic fantasy and the conclusion will leave readers eager to move onto the third book (which they can do immediately, rather than waiting five years as fans had to back when this novel was first published). The book is available now in the UK and USA.
Posted by Adam Whitehead at 13:46

Email ThisBlogThis!Share to TwitterShare to FacebookShare to Pinterest
Labels: a fortress of grey ice, j.v. jones, the sword of shadows

The sense of place for these books is a draw. Freezing northern plains is not overcommon in fantasy fiction, especially so viscerally described and invoked.

Agreed - not quite as good as the first book, but the final 100 pages were fantastic. Not quite sure why I haven't continued to A Sword from Red Ice yet, but it's on my must-read list.

I am looking forward to your review of "Watcher of the Dead". Or rather not, at least I feel really sorry for the series. I didn't feel the "Frozen North" anymore and had problems to finish the book, the atmosphere was gone.

I've read all the books in this series published so far,the wait continues for the next book.

I wish at least the publishers had the decency to post some news regarding the next book for us who have been fans of this series for nearly 14 years now.

The author is completely silent since 2 years and so is the publisher.

I've been interested in this series for a while but have refrained due to the mixed reviews of the later books. Seeing such high praise from Wert however, has enticed me to reconsider picking these up. And that's not even considering his many comparisons between this series and ASoIaF which has only enhanced my eagerness. I think I'll wait to see what Wert has to say about the remaining book (and possibly do a bit of research about release/delay of the final book) before jumping into this though. Here's hoping the strong reviews continue!

Re: "Watcher of the Dead", I found it a really enjoyable quick read, which I always think is the sign of a good book!I can't understand all negative stuff I've seen about it?

Weird. I have both the US (Tor) and UK (Orbit) editions of this in mass-market, and the UK version has entire sections missing, and not due to printer error or missing pages. I only noticed because I just happened to switch between the two while doing a re-read cuz I liked the US typesetting better. For example, in ch. 9 of the US edition, there is a 2-page scene between Raina and Mace that is entirely cut out of the UK version (right before Raina sees the dying guidestone). Not hugely important, but a good, impactful scene nonetheless.

I never knew that different editions had such drastic variations in editing (outside of the normal "miles vs kilometers" or differences in spelling). Have you ever heard of anything like this, Wert?