The Amazing Maurice and His Eductated Rodents by Terry Pratchett

A band of travellers from Ankh-Morpork have arrived in the town of Bad Blintz. The band consists of a boy with a flute named Keith, a tomcat called Maurice and a lot of rats. A lot of very smart rats. However, as the town suffers from a curiously well-timed rat infestation and Keith and Maurice prepare to enact 'the scam', it becomes clear that something else is at work in the sewers and tunnels under the town. Something that takes an interest in the curiously smart rodents... 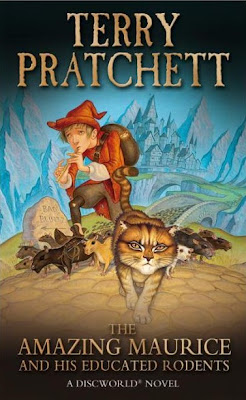 The Amazing Maurice and His Educated Rodents was Terry Pratchett's first Discworld novel aimed at younger readers, released in 2001. It was, arguably, the novel that finally broke Pratchett in the USA, where it won the Carnegie Medal and won more notice than his previous books (which had been a cult success at best). Subsequent Discworld books began to hit the New York Times bestseller lists, finally giving Pratchett some Stateside success after almost two decades as Britain's biggest-selling author (well, until the arrival of a certain J.K. Rowling).

It's an interesting novel, most notably because Pratchett makes exactly zero concessions to his apparently intended audience. The novel is written in the same manner as his adult books and in fact is actually among the most disturbing Discworld novels, with the revelation of the antagonist in the book being one of Pratchett's more revolting moments. It may have talking rats in it, but the tone is closer to Watership Down (complete with some pretty savage fights and deaths) than to Beatrix Potter. Pratchett seems to do this deliberately, with the rats' belief in a utopian future of animal cooperation stemming from reading a children's book called Mr. Bunnsy Has An Adventure, which becomes a totem of their tribe. Pratchett paints the internal divisions of the rat gang and each character in some detail, with his traditional economic-but-effective storytelling. The book has a darker tone than most of his novels, and whilst there are still a few laughs here, it's a more intense book than many of the Discworld series.

It's also quite snappy, coming in at a breezy 270 pages, avoiding the bloat some of the more recent Discworld books have suffered from. Pratchett sets up his plot and characters, tell his story with impressive depth and characterisation and gets out all in the time that some more traditional fantasy authors are still using to clear their throats.

The Amazing Maurice and His Educated Rodents (****) is Pratchett at his more impressive, telling a darker story than normal but with his trademark wit and skills at character-building. It's also a complete stand-alone, with no connections at all to the rest of the Discworld series and can be read completely independently. It is available now in the UK and USA.
Posted by Adam Whitehead at 11:30

Email ThisBlogThis!Share to TwitterShare to FacebookShare to Pinterest
Labels: discworld, terry pratchett, the amazing maurice and his educated rodents

I do think this was a big break out book for Pratchett, opening up the USA market for him in a big way.

I do think he made one concession to his intended audience, though: Chapters.:)