A Sword from Red Ice by J.V. Jones

The armies of Spire Vanis have invaded the clanholds and are marching against Ganmiddich. The clans are responding, mustering their armies to defeat the invaders and claim the prize of the Ganmiddich roundhouse. However, events back in Spire Vanis are outpacing the armies and may soon render the whole conflict moot. 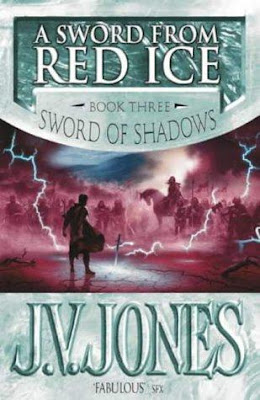 Meanwhile, Raif Sevrance has succeeded in defeating the Endlords at the Fortress of Grey Ice, but knows the victory is only temporary. His path takes him back to the Rift, where his fellow Maimed Men are besieged by a servant of the Endlords, but he must also strike out beyond, in search of the mysterious sword known as Loss.

A Sword from Red Ice was originally published in 2007, five years after the publication of the previous novel in the series, A Fortress of Grey Ice. It is fair to say it faced a mixed reaction, with some readers citing it as Jones's best book to date and others as a novel with very limited plot development and poor pacing.

I elected not to read the novel on release, instead waiting for additional volumes to appear. Reading A Sword from Red Ice immediately after A Fortress of Grey Ice, it is clear there's been no major drop-off in quality or indeed pacing. A Fortress of Grey Ice was a slightly weaker novel than the first book in the series, A Cavern of Black Ice, because it introduced several new POV characters and storylines and the need to service all of these plus the existing characters resulted in a lessening of focus. Actually, this seems to have been one of the two main reasons for the delays to the third novel (the other being the fact that the publishers sat on it for more than a year before releasing it, due to scheduling issues): Jones had introduced even more storylines and characters to the mix and seriously pared these back in editing, allowing her to spend more time on the core characters.

The result is a book in which, when taken as a whole, a lot happens: Raif crosses the continent (twice), undertakes a quest, saves a city and finally finds a home and place in the world; the biggest battle in the series to date is fought, with the consequences being enormous; and the political situation within both Clan Blackhail and Clan Bludd shifts dangerously and dramatically. However, other individual storyline progress more modestly: Angus Lok only appears in the prologue and the epilogue; what he's doing for the rest of the book seems rather unclear, especially given the months that have passed in the interim. Effie Sevrance spends the whole book (though that's only four chapters from her POV) going up a river on a boat. Ash March, despite being set up as the series' second main character after Raif, spends the whole book traipsing through a wood. There is a definite sense of a dislocation of time in the novel, with some characters spending weeks or months travelling and others apparently only having a few days unfold in their storyline (Lok, most notably). I am also rather uncertain what Bram Cormac's storyline adds to that of the series overall. He spends most of this book (and the previous one) wandering around unable to make a decision about his future and angsting about it, like an introverted student on a particularly chilly gap year. He finally does commit to a new cause at the end of the novel, but it's questionable if we really needed this amount of set-up for him.

Of course, epic fantasies which get so big that the author loses control a little bit of them and ends up (inadvertently or not) adding more material than we strictly need is nothing new. Fortunately Red Ice is much more of a Dance with Dragons - a novel with problematic pacing and some storylines that could have been handled better but also some very fine moments sprinkled throughout - than a Crossroads of Twilight, where the reader will have more fun reading the Wikipedia summary than suffering through the novel itself. Raif reaching the titular Red Ice is a satisfyingly mythic moment. Raina Blackhail finally taking matters into her own hands and seizing control of her own and her clan's destinies is an important moment in her character arc (especially as she is arguably one of the best-written characters in the series). Ash realising the full potential of her powers is a powerful scene. If A Sword from Red Ice disappoints in some areas, it excels in others.

A Sword from Red Ice (****) is well-written, particularly well-characterised and its strongest moments shine. At other times the pace falters and some storylines are left under-developed (Book of Words fans hoping to learn more from Baralis will be disappointed). But a few problems aside, this is a strong addition to the series. The novel is available now in the UK and USA.

Email ThisBlogThis!Share to TwitterShare to FacebookShare to Pinterest
Labels: a sword from red ice, j.v. jones, the sword of shadows

Would really like any information about a possible release date for book 5.