Dubai, the near future. Massive sandstorms have rendered the city almost inaccessible from the outside world. Just before this happened, the US Army's 33rd Battalion went into the city to help with the evacuation, and hasn't been heard from for six months. Three Delta Force operatives are sent into the city with orders to find out what's going on and report back. What they are embarking on is a journey into the heart of madness, war and death. 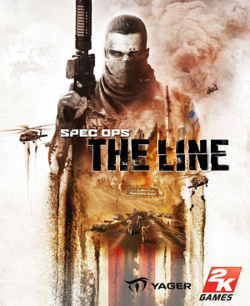 Spec Ops: The Line is two things. The first is a fairly standard, cover-based action shooter, in which grim men shoot other grim men in the head with a variety of lethal weapons. The second is a meditation on the soul-destroying nature of war and the psychological trauma that exposure to long periods of violence and mayhem can cause. It's essentially a subversive take on games which apparently seek to glorify war, like the Call of Duty franchise, and instead argues that war is not a cartoon game. Much more than this, the game very deliberately makes itself often uncomfortable to play, to the point where the player may not be having any fun and may want to turn the game off (and, incredibly, the developers have said this is something they deliberately wanted to happen).

The degree to which this works is up for debate. Spec Ops: The Line is an incredibly grim, hard-going game which does not relent on the action or the reflection on the death and slaughter afterwards. Some of the most harrowing scenes I've ever seen in a video game are present here: the scene where your soldiers deploy white phosphorus on an enemy position only to hit a load of sheltering refugees is going to be one of those watershed moments in gaming which people are talking about for years to come (a bit like the 'No Russian' bit of Modern Warfare 2, only not so gratuitous). The game borrows a lot of its atmosphere and tone from the movie Apocalypse Now (and the novel it is based on, Heart of Darkness), but also brings in contemporary imagery from the wars in Afghanistan and Iraq, particularly those incidents where well-meaning soldiers inadvertently bring about the death of innocent people. At every stage of the game, your character, Walker, makes what appears to be the right decision, but the consequences are almost always shown to be disastrous.

This is both good and bad. Good, because games which challenge and subverts expectations and makes the player incredibly uncomfortable about what's happening are few and far between. If we are to accept that games are art, then games which are 'difficult' to conceptually 'get' are as valid as any 'difficult', art or theme-fuelled film or album is. On this basis, the game is successful because it sets out to do something different and thought-provoking, and does it. 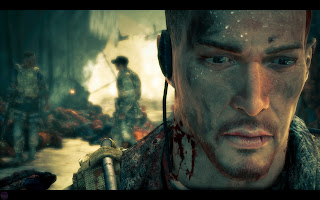 The problem is that the game also does not offer any choice outside of its linear story (aside from a few different endings, which can be replayed easily enough) despite choice being the cornerstone of the entire game's philosophy. You are constantly told that it is your choice, your decision which has brought about disaster, but it isn't. It's Walker's. Walker is the character you are directing through the game, but you aren't really playing him (aside from telling him to shoot Dude A before Dude D in a firefight). You have no choice, you simply have to experience Walker's story and its consequences. Normally in a game this isn't a problem - linear action games are a perfectly fine thing to play and enjoy - but here it jars badly with the game's focus on choice and consequence as a major theme. Giving you real choice and real consequences for those choices would have been the more powerful option...but would have made the game far more difficult to make for the developers, and diluted their point if you simply chose the white hat option throughout the game.

As far as the gameplay goes, Spec Ops is a fairly mediocre shooter. It has a typically badly-designed cover system which sticks you to walls and can be fussy letting you go (especially when a grenade's just landed by your feet). It also does that weird thing of limiting you to just two guns at a time, but then throwing 50,000 enemies at you to kill and then loot, so the attempts to limit your choices of gun and ammo really come to nothing and the game goes to some lengths to ensure there's just the right gun for the job conveniently lying around when you need it. There's also the tradition profusion of cut scenes every 5 minutes or so of gameplay, although the point of the game is more found in the narrative than the gameplay, so this time around it actually works. Graphically the game is not very advanced, but its art direction is astonishing, depicting Dubai as a sort of actually-existing Rapture (from BioShock), a defiant technological challenge against nature. Particularly well-realised are the game's sandstorms, and the one outstanding gameplay moment of the title comes when you have to press through a blinding sandstorm whilst fighting off an enemy attack.

Spec Ops: The Line (***½) is a narratively and conceptually bold game, but one that sacrifices - to a certain extent - gameplay on the altar of theme and art. Those who want a fun shooter game are advised to look elsewhere. Those who want to see an example of a game that tries to be something much more ambitious and powerful than its flawed building blocks - even imperfectly - are advised to check this out. The game is available now in the UK (PC, X-Box 360, PS3) and USA (PC, X-Box 360, PS3).
Posted by Adam Whitehead at 20:50

Email ThisBlogThis!Share to TwitterShare to FacebookShare to Pinterest
Labels: spec ops: the line

I think you miss the main point: the choice is not in taking different actions in the game (which few, if any, games ever capture anyway), but your choice is to play or not to play, which resonates in Walker. His choice is to leave Dubai or not to leave, and he chooses, time and time again, not to leave, exceeding his orders. And you, as player, continue to play, despite the game being not really fun and forcing you to comit hideous crimes. You play on and on, as Walker walks on and on.
Compare this with my two-part-review of the game on Nerdstream:
http://thenerdstreamera.blogspot.de/2013/01/after-spec-ops-line-nothing-will-be_1.html and http://thenerdstreamera.blogspot.de/2013/01/after-spec-ops-line-nothing-will-be.html

I can see that argument, but it seems a bit odd to say that you should spend £30 (or considerably more on console) in order not to play a game.

The other issue is that we see games with similar 'dark' paths for the protagonists which give you much more freedom and choice: FALLOUT: NEW VEGAS, for example, is considerably more successful in putting you in a not dissimilar situation through the choices that you, the player, make, and even ensuring that the 'white hat' options still come with consequences.

I didn't particulary like the gameplay of New Vegas, so I stopped before such decisions came up and can't answer to that. However, the game of course does not exactly want you to stop playing, since you paid for it and all that, and you need to see the endings.
The thing is more an a philosophical level: yes, the game does force you to commit gruesome actions, and yes, this means you, as a player, did that. You don't stop because you paid for it and because you simply play games to the end. But other games, especially Call of Duty, do this as well. They force you to torture and murder people, and it's considered fun. What The Line does, enforces through the sometimes crappy mechanics, is to show that this is NOT fun. Or did you particulary like destroying the radio tower?

I haven't played Spec Ops: The Line, but last year I found Tom Bissell's article about the game a very interesting read.