RIFTWAR companion volume to be published in 2013

The last-ever novel in Raymond E. Feist's Riftwar Cycle, Magician's End, will be out in May. This is the 30th novel in the series and marks an end to the saga that began back in 1982 with the publication of Magician. 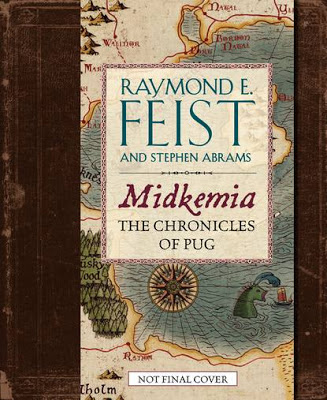 Appropriately, it has been revealed that there will now also be a companion volume to the series. Entitled Midkemia: The Chronicles of Pug, this book will be a 192-page 'coffee table' book containing illustrations and extensive maps about the world of Midkemia. The project grew out of a mooted 'Midkemia Atlas' that Feist planned several years ago. The book will also feature 'narration' from the characters of Pug and Magnus.

“In the first year of the reign of King Lyam conDoin, I, Pug of Crydee, magician to the royal court and cousin to the King by adoption, do take quill in hand and set forth this writ, that all may benefit from the knowledge I have gained…” -Pug of Stardock

So begins the narrative account of Feist’s best-selling character, Pug of Stardock, for Midkemia: The Chronicles of Pug. Part travel log/journal and part atlas, this visual compendium brings the world of Midkemia to vivid, illustrative life, and gives readers a completely new look at the creative genius of Raymond E. Feist.

Designed and illustrated by the same creative team that brought us the Harry Potter books (Film Wizardry and Page to Screen), Midkemia: The Chronicles of Pug is divided into five sections and transports readers -- via maps, blueprints, floor plans, and journal text -- to the outer reaches of the Midkemia world and into its cities. Starting at the Far Coast, Pug, the hero of The Chaoswar Trilogy, recounts his childhood, before he embarks on a journey that takes him to the Grey Towers, Sorcerer’s Isle, and Krondor. Pug also encounters several favorite characters and people along the way -- including Jimmy and Locky, the Sauur, and Erik and Roo in Ravernburg. Beautiful hand-drawn maps illustrate the changes in Midkemia’s geography as war ravages the land and physically alters the landscape; dedicated readers and fans can literally trace the changes made by each battle. Unlike anything else in the Feist oeuvre, this book is a totally immersive look into the world of Midkemia as never experienced before.

Notably, Feist is co-writing this book with Stephen Abrams. Stephen Abrams created Midkemia in the mid-1970s as a roleplaying setting. Feist, a player in Abrams's games, started writing the Riftwar Cycle to 'fill in' the history of the roleplaying setting at Abrams's suggestion, with Magician set some 500 years before the 'present day' of the setting. The original plan was for Feist to write the account of the five great Riftwars that shaped the history of the planet. Impressively, some thirty-five years after that discussion, that's pretty much the task that Feist has now completed.

The book is currently scheduled for publication on 5 November 2013 from Harper Design. A working cover is shown above. You can look inside the book and see how it's going to look here.

Thanks to Jussi from Risingshadow for discovering the above information.
Posted by Adam Whitehead at 15:43

I am surprised how many people have cut their fantasy reading teeth with Feist's work, especially the early novels.

It's been a long while since I read any Feist, but I just got approved for the e-ARC of Magician's End, and I'm looking forward to getting caught up on this final trilogy.

Feist still has one more book to publish - Magicians End, out this year.

Though Tolkien was my first, Feist is the one that truly got me started on the fantasy genre. I read Magician and the 20 or so following books that were out at the time in a year before moving on to other authors.

The Empire trilogy is still rated among my very favorite reads.

I lost interest with the Darkwar Saga, though I have still been buying the new books as they release. Now that the final one is almost here, I guess it is time to go read them. :)

I'm definitely one of those that cut their teeth on Feist's stuff... I was sort of a science fiction snob until I was 17, and someone literally shoved the first volume of MAGICIAN into my hands and insisted I read it. The quality of the writing takes a dip at the end of the Serpentwar books and never really gets back on its feet, but I am still diligently trying to catch up with the last couple of books so I can read Magician's End when it comes out. 35 years! Yeesh. Nice to see that Ray's pulling it off and not dying in harness.

Nice one Scott. I remember when THE LIES OF LOCKE LAMORA first came out and you said that a lot of the economic side of the story was inspired by RISE OF A MERCHANT PRICE, the first epic fantasy based heavily on futures and investments :-)

I'd moved on to contemporary reading during my late teens when I thought I'd "read out" the fantasy genre with Tolkien and Lewis. Magician pulled me back in. While I agree the later books pale in comparison, I will always remember Magician and the Empire trilogy fondly. The other favourite of mine is the underrated Honoured Enemy.

I am sad to see the series come to an end, but am happy this companion piece will be published. I learned about Feist as a kid playing Betrayal at Krondor on the family PC, got hooked on the books and now 20+ years later still enjoy Ray's work.

I was quite young (well, a lot younger than I am now, that is) when I first got drawn into the world of Midkemia and the adventures of Pug. Now, 20 years later, after purchasing the final book, I thought I'd read the whole series again so that the storyline was fresh in my head before finally reading "Magician's End". I was quite surprised to see how much I had actually forgotten of these stories over the years and, also, how much I really loved these books. The only thing better than this beautifully illustrated addition, "Midkemia: The Chronicles of Pug" would be to see it on the big screen.

Someone left a copy of their just purchased copy of Magician on our terrace. There was no way of finding out who and no one came to collect it for weeks. Then I had my vacation planned and for some reason I took the book with me. I'm glad I did. It was and is still one of my favorite reads of all time. The fantasy meets SF part with the parallel dimensions is fantastic. I read the books twice and passed on at least three copies to people who also enjoyed the books.