StarCraft II: Heart of the Swarm

The dreaded Queen of Blades, the leader of the Zerg, is no more. Sarah Kerrigan has been freed from the Swarm and is now human once again...but consumed by the need to avenge herself on Arcturus Mengsk, Emperor of the Terran Dominion, the man who betrayed her and left her for dead. When Mengsk's troops raid the facility Kerrigan is recuperating in, she finds herself alone and without any allies. Kerrigan needs an army to bring down her enemy and the leaderless Zerg Swarms may be the key to victory, if she can resist becoming part of the Swarm once more. 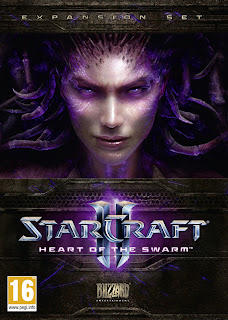 Heart of the Swarm is the rather tardy second instalment of the StarCraft II series of games, arriving an eyebrow-raising three years after its predecessor, Wings of Liberty. Considering the game uses the exact same engine as its predecessor (some minor upgrades aside) and apparently follows a story arc laid down by the guys at Blizzard almost a decade ago, the reason for the delay initially appears puzzling. The answer, of course, lies in the franchise's multiplayer angle. Blizzard have introduced new units with this expansion and have spent months and months painstakingly testing every iteration of the changes, dumping some new units and bringing in others, to make sure they don't upset the multiplayer balance. Given that StarCraft II's multiplayer scene is worth millions of dollars, this is unsurprising, but it does leave those of us primarily interested in the game's single-player storyline hanging in the wind for quite a long time.

Still, the game is here, and to a certain degree it's StarCraft as normal. You have a base, you collect resources, you build units and you fight the enemy for territory (control of additional resources areas where you can establish secondary bases) and ultimately try to destroy them. The gameplay is held together by a storyline, in this case one about vengeance and evolution. Kerrigan is out to kill Mengsk and end a feud between the two that began fifteen years ago in the original StarCraft. Blizzard cleverly raise this story - a subplot in the overall scheme of things - to prominence in Heart of the Swarm and push the big-picture storyline about the return of the alien Xel'Naga firmly into the background for the next game to worry about. Giving Heart of the Swarm its own direction and a storyline that does come to a definitive conclusion helps it avoid the 'middle title' syndrome that trilogies often suffer from. Heart of the Swarm also feels like it might be treading over the same ground as the original title's Brood War expansion, which also focused on Kerrigan uniting the Swarm under her control. Heart of the Swarm contextualises this in a different way, however, to avoid repeating concepts already visited in the series.

The campaign structure is quite interesting. There are five sub-campaigns, four of them taking place on planets and a fifth in deep space, each consisting of several missions. Between missions Kerrigan is based on board her spacecraft, a Zerg Leviathan (replacing the Terran battlecruiser Hyperion from Wings of Liberty), and can seek advice from her underlings, upgrade units and enhance her own powers and abilities through a levelling system. The unit-upgrade section is the most amusing, as Zerg mutation specialist Abathur (the Zerg equivalent of a slightly befuddled scientist) portentously reveals how he's going to improve the Zerg species, usually provoking a sarcastic response from Kerrigan. Given that the Zerg are the most alien and weirdest of StarCraft's three races, Blizzard draw a nice line here between making sure they stay that way whilst also humanising them enough to give them identifiable personalities. The surprise reappearance of a previous major character thought dead also helps give the game some more identifiable personalities.

The writing is as dreadfully cheesy as it was in Wings of Liberty, although the theme of a need for vengeance so powerful it overcomes one's humanity is a bit more interesting than the muddled and overlong campaign of the previous game. Heart of the Swarm is significantly shorter in terms of proper missions than its predecessor (clocking in at 20 compared to 29, almost a third shorter) but makes up for the shortfall with optional training missions showing how potential Zerg mutations will be used on the battlefield. Though entertaining, these mini-missions do feel like an attempt to pad out the length to make players feel they are getting their money's worth, and none will take longer than five minutes to complete.

On the battlefield, things are similar to Wings of Liberty. As with Liberty, the game tries to avoid too many build base-build army-kill everything missions, instead peppering some more creative objectives into the game. This is helped by the deployment of Kerrigan herself, a powerful unit with numerous powers (which are upgraded throughout the game). Kerrigan can turn the tide of a battle single-handed, but can't win everything by herself, so deploying additional troops is always necessary. Heart of the Swarm avoids the dull slog some of Wings of Liberty's missions descended into, but sometimes goes too far the other way by making things too much of a walkover. Certainly Swarm benefits from occasionally being whacked up to 'hard' mode on occasion.

On the minus side, there is obviously going to be another long wait for the conclusion of the story in Legacy of the Void, and certainly in the UK the pricing of this expansion set is off-putting: £30 - the cost of a full-price, complete game - for an expansion with a third less content than the previous game? Heart of the Swarm does just about justify it through monumental production values, a decent length (about 10-11 hours in total) and a more entertaining campaign than Wings of Liberty, not to mention the multiplayer enhancements. Also on the minus side, though for an expansion much less of an issue, the game has still resolutely failed to take on board any of the major RTS innovations of the last fifteen years. Proper 3D line of sight, cover and destructible scenery and battlefields are still nowhere to be seen, and the camera is still suspended uncomfortably close to your units and the battlefield even on the higher resolutions. Given that Wings of Liberty was looking outdated in 2010, Heart of the Swarm is looking positively geriatric in the impending face of Company of Heroes 2 and Total War: Rome 2. For fans of the franchise, however, this will no matter one whit.

StarCraft II: Heart of the Swarm (****½) is ultimately a more satisfying and enjoyable game than Wings of Liberty. The writing is still poor on an individual level, but the story is more focused and has a definitive and satisfying ending, compared to Wings of Liberty's cliffhanger. The result is a game that improves on its forebear and makes for a satisfying addition to the franchise, though one that not likely to win over anyone not already a fan. The game is available now on the PC (UK, USA).
Posted by Adam Whitehead at 18:36

Email ThisBlogThis!Share to TwitterShare to FacebookShare to Pinterest
Labels: blizzard, heart of the swarm, starcraft, starcraft 2

Hmmm. I was a dedicated Zergist in SC1, but I have to confess I have had trouble getting into the rhythm of hatching Zerg in SC2... not sure when I'll get around to playing this, though I mean to.

Starcraft is pretty much like the Halo of RTS games. They can't change the fundamental game mechanics too much, because that would upset the base of customers that buy it (along with the professional scene in key markets).

As far as RTS games go, the genre has had very weak characters and plots since its inception, and they're almost always very lame and boring. That being said I always find myself being less judgmental to the Starcraft games, because I'm at least some what engaged by the characters and the plot. I do agree with you though, the dialogue in Starcraft is about as bad as it gets.