A Cavern of Black Ice by J.V. Jones

The chief of Clan Blackhail has been killed, allegedly by raiders from the rival Clan Bludd. The new chief, Mace Blackhail, calls for war, but one of the witnesses to the attack, Raif Sevrance, knows that the Bludds were not behind it. When Blackhail's reprisal attack results in the unintended massacre of innocent women and children, Raif abandons his clan and family and flees in the company of his uncle, the city-born Angus Lok. 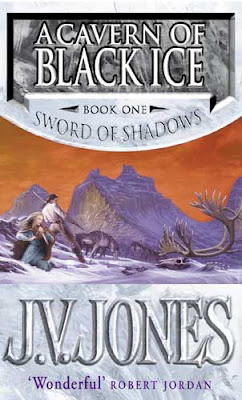 Meanwhile, far to the south in the city of Spire Vanis, Asarhia March is a virtual prisoner in the fortress of her foster-father, the city's surlord. When a chance to escape arises, Ash takes it without hesitation. But her adopted father has spent sixteen years preparing for the sorcery within Ash to awaken, and he will not surrender it without a fight.

A Cavern of Black Ice, originally published in 1999, is the opening novel in J.V. Jones's Sword of Shadows sequence. This series comprises five novels, four of them now available. Prior to this series Jones wrote a well-received trilogy, The Book of Words, and a successful stand-alone novel, The Barbed Coil.

The Sword of Shadows takes place in the same world as Book of Words, with A Cavern of Black Ice commencing about sixteen years after the events of Master and Fool. The two series share two characters in common, but otherwise there are no major links between them, and Sword of Shadows can be enjoyed by itself. This is helpful because Book of Words, though entertaining, was certainly not brilliant. The work of a new author, it was a mixture of clumsy writing mixed in with variable characterisation and a dark sense of cynical humour, its main distinguishing feature. Solid, but unspectacular.

Sword of Shadows is a very different series. A Cavern of Black Ice is subtle where the former trilogy was overt, restrained where the older work was indulgent. A Cavern of Black Ice is, basically, as good an opening volume to an epic fantasy as has ever been written, better than Gardens of the Moon, The Eye of the World or Magician and almost as strong as A Game of Thrones. It's an epic work but one that does not flounder or pad. It tells the reader exactly what they need to know whilst still sprinkling in enough worldbuilding details and secondary characters to make the setting feel alive and vivid. Jones seems to have grown immensely as a writer between the two series, an improvement in writing quality between books which I believe is unparallelled in the subgenre.

One of the things that sets the work apart is the setting. The clanholds and the northern territories are lands of freezing tundra; windswept, bare forests; and frozen, treacherous rivers. There is a constant chill on the air which Jones paints so vividly some readers may find themselves reaching for their gloves. The clanholds themselves are depicted with impressive depth and realism. Jones has clearly done her research on surviving in subarctic environments, and we learn about how these clans survive and live. Refreshingly, these clans don't just consist of warriors but also farmers, smiths and weavers, with women having an important and vital role to play, sometimes as chiefs. Jones doesn't go overboard with the details, but the clans are shown to be close-knit communities made up of individuals. Jones's biggest improvement has been with characterisation, developing an almost George R.R. Martin-like ability to introduce a character, nail their characteristics in a few words and ensure the reader remembers who they are when they next show up 200 pages later.

This extends to our supposed villains as well. Penthero Iss and Sarga Veys are fairly obvious antagonists (though still well-depicted) but the brutish Marafice Eye has a whiff of the Sandor Clegane about him, a brutish lackey with unexpected depths. Vaylo Bludd, the Dog Lord, who is set up early on as one of the main bad guys, is surprisingly humane in his own POV chapters but is still a violent and occasionally remorseless killer. Only Mace Blackhail really faills into the stock bad guy department, complete with psychopathic and rapist tendencies (for once, actually used to further the plot and character in a meaningful way rather than a random act of porno-misogynistic violence thrown in for supposed grit), though also a silver tongue which gets him out of some pretty tricky situations.

Our protagonists are more interesting this time around as well. Ash and Raif at first glance appear to be cover versions of Melisandra and Jack (the protagonists of the Book of Words trilogy), our callow youth heroes, but are altogether more complex characters. Ash discovers she was put on the world for a single purpose, and must thwart that purpose before thousands are killed by it, and Raif is apparently cursed to have death following in his footsteps at all times. Both characters have elements of tragedy attached to them, which makes their stories more compelling.

Jones rarely falters. The book is well-paced with only the conclusion feeling a little rushed. But otherwise A Cavern of Black Ice (*****) is an excellent, deftly-executed opening volume to a longer series. It is available now in the UK and USA.
Posted by Adam Whitehead at 14:01

Email ThisBlogThis!Share to TwitterShare to FacebookShare to Pinterest
Labels: a cavern of black ice, j.v. jones, the sword of shadows

Love the series & I think it gets better as it develops...
But can't find any up to date info on JV Jones?

This is probably the most underrated epic fantasy out there--the first novel probably being the strongest so far. JV Jones absolutely nails the frozen setting -- I've never read anything with such a vivid portrayal.

I sometimes wonder if the cringe-inducing cover art (complete with scantily clad females) has inhibited the series' popularity.

I loved this book but couldn't seem to get through book 3. Why is it so many epic fantasy series seem to start off amazing then hit huge slowdowns where it seems like almost nothing happens? It's a shame but after fighting through Feast, Dance, Crossroads of Twilight etc I just couldn't do it for this series.

Thanks, Adam. This is when I think Jones started to hit her stride as an author.

One person's "nothing" might be another person's character development, worldbuilding, and so on. I have enjoyed all of the books so far and am excited for book 5 (though it is not appearing on the horizon as of yet).

This series does not receive the attention it deserves imho.

It's almost cruel to point out how good the first novel is. Because after her long break the following books absolutely didn't live up to the earlier volumes of this series! :(

This first book is amazing. It has some of my more vivid "reading" memories, usually kept for earlier books like Rand at Dumai Wells and Druss clearing the walls in Legend.

Raif at Duff's stove house. Raif meeting death in the dank cell (esp that quote, "Kill an army for me Raif Sevrance. Any less and I just might call you back"). Raif waiting with the clansmen before the terrible massacre of the Bludd women and children. Even just the language of Raif and his brother at the beginning of the book, describing what is happening, the metallic saliva, the badness of what happened at the camp.

For a young me, this was such an amazing read. I picked it up when it landed, only because it had an RJ quote on the front, "Amazing" (Although this wasn't his full quote apparently).

It's great to read your thoughts Adam.

Definitely a different sort of epic fantasy tale, but I quite enjoyed it. I've read the first 2 books, and am looking forward to moving on with #3 at some point.

Is this book related to her previous series? Do I have to read the Book of Words books first? Thanks!

There are connections to Book of Words that make a few scenes in Sword of Shadows resonate a bit more notably (most importantly, the prologue of the first book, the very end of the first book and a running subplot through the rest of the series). It isn't necessary, however, as the relevant information is given when needed.

I thought I read that Jones abandoned this series. Is that not the case?

Nah, she sort of goes into seclusion when writing. Ironically the following has just appeared on her site, jvj.com:

Ok, I admit it. It's been a long time since the site received any updates. I've been really busy completing Book V of The Sword of Shadows and everything else has been on the backburner. I plan to turn this around soon, starting with regular posts to the journal. Thank you for your patience, JV

Book 5 was originally scheduled for late 2012 from what I remember. So it's late but not GRRM late ;)